You are here: Home / Music Marketing / How To Promote Your Music On Twitter – A Guide For Musicians 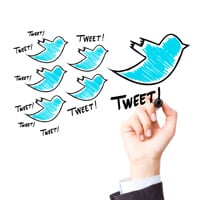 If you’re wondering how to promote music on Twitter, this is the guide you need. Whether you’re a beginner to using Twitter as a means to promote your music or you’ve experimented with it before, I’m sure you will pick up a few handy tips and tricks here today.

In this guide we’ll look at why you should use Twitter to promote your songs, the biggest mistake people make when promoting their music on Twitter (and how to avoid it), how to interact with your followers (many find it easier than Facebook), why you need to set your profile up correctly and how to do that, the importance of unfollowing some people, and much more.

If you find this guide useful, please Tweet it, share it on Facebook, and link to it anywhere you know other musicians hang out. Thank you.

So, without wasting any more time, let’s get into it.

Why Would You Want To Promote Music On Twitter?

So you might ask, with all the different tools and websites out there for musicians, is Twitter one of the websites you should definitely have a profile on? Or is it just another website that will suck up more time then it’s worth?

Well in my mind, there’s no doubt that Twitter is an essential tool for any modern day musician! Let me explain…

While both of those mentioned platforms can get you a load of views and potential fans if they go viral, with Twitter it’s easier to control the amount of results you get.

You can get these views by following proven fans of your genre, and when they look into who you are, leading them back to your site. From there you have the opportunity to impress them with your music and get them onto your mailing list.

This is a simple yet effective music sales funnel, and one that is definitely worth putting into place.

So as I mentioned above, an effective way to market your music on Twitter is as follows:

This is a proven strategy that I’ve seen work time and time again. While it’s super effective though, it can be a very timely process if you do it all manually. It takes time to find people, add them, interact with them, and unfollow anyone who doesn’t follow you back or show interest. In fact, it’s probably more hassle then it’s worth in terms of the amount of results you will see for your time. This is why I suggest largely automating this process using the tool Tweet Adder.

Tweet Adder keeps track of who you’ve followed before so you don’t re-follow them by mistake (A big ‘no no’ on Twitter when done too much) and a whole load of other things beside.

With Tweet Adder doing all the heavy lifting, you’re left to do the easier and more fun side of Twitter music promotion: 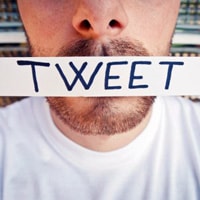 Yes, if you want to market your music on Twitter effectively, you have to interact with your followers. There’s no two ways about it; if you don’t keep your Twitter profile up-to-date, you won’t get a lot of people interacting with you. If you don’t get people interacting with you, you won’t have people going back to check out your website. This happens and you won’t get as many new fans as you could from your following efforts. In fact, you’ll end up annoying people.

Luckily, interacting with fans couldn’t be easier. It’s simply a case of sending at least one Tweet announcement a day, and replying to the people that talk to you directly.

Some of the things you can tweet about include:

Tweeting shouldn’t take too much time out of your day, but it can make a big difference in terms of how much your fans feel connected to you. The more connected they feel, the more they’ll get involved and spread the word about you.

If you have a smart phone, your twitter promotion couldn’t be easier. All you need is a Twitter app (or you can use Twitter on your mobile internet), and sending out Tweets shouldn’t take more then a few seconds at a time. When it’s instant communication as well, fans will really appreciate this.

Making Sure Your Twitter Profile Design Is Up To Scratch

As well as adding new followers and sending out Tweets you think your fans will like, one other very important factor in Twitter music marketing is having your profile well set up. In fact, this should be done even before you start interacting with fans.

Doing things like setting up your page’s background image and your profile text is all important. Before they see your Tweets, these are the two things that most potential fans will look at. Get this wrong, and you could lose out on fans before they’ve even got to your tweets.

So how do you make sure your Twitter profile is well designed and unique to you? Well first of all, you need to use Twitter’s built in profile customizer. You can do this by going into your ‘settings’ area, then ‘design’. Here you can either pick a premade theme, or you can do what I recommend, which is customizing your own. Doing this you can add your own background image, one that people will instantly recognize as being your Twitter page once they land on it.

You don’t want it to be anything too overwhelming or in your face, but you want to make it cool and represent you. If you have a logo I suggest you use this somewhere in there, otherwise a nice full sized image can also work well.

Once you have your profile looking all cool and ready to attract potential followers, the next stage is to get your introduction written up.

At the top of your Twitter page, Twitter will allow you to add a quick 160 character bio about yourself. This will be among the first text people will read on your profile, and be where they go when they want to find out more about you. Because of this, you need to get this part right…

So, what should you include in your Twitter bio? Well, firstly you need to make sure you tell people who you are and what you’re about. If people don’t like what they read here or can’t instantly relate to you, they will most likely not go on to read any further.

Secondly, you should add in a link to your website if you have the space. This isn’t essential as Twitter allow you to list your website directly under your bio anyway, but if you’ve got more then one link you want to share, the option to put it here is available.

So, here’s a couple of good Twitter bio examples:

“Billy Bobb; Punk rocker, music maker and fan interacter. Get all my latest songs and keep up to date with what’s going on at www.BillyBobbOnline.com.”

“Like Rap music? Then find out why Danny Fresh is being called one of the best new talents out of Compton. Check out www.DannyFreshMusic.com for all the info.”

Both of these bios do a few things. They let the person know what kind of music you make, they let them know your name (People need to hear your name a few times before they truly remember you), they’re more exciting them the standard ‘about me’ bios you find, and they lead people back to your main site. You should try and incorporate all these things in your bio to increase conversions as much as possible.

The Importance Of Unfollowing People Who Don’t Follow Back

While following is an important part of Twitter promotion (You want to follow people so they in turn follow you back and get to know about your music), unfollowing them is just as important. You see, the number of people you follow and that follow you are displayed publicly on your profile. These numbers can either work for you or against you, depending on how you manage things.

Let’s step back for a minuet and look at thing from the outside. Let’s say someone followed you who you’ve never heard about before. You go on to check out their page, and they’re following 1000 different people. Despite that, only 150 people are following them back. What’s the first thing that comes to your mind, “this person’s probably not worth following” right?

If on the other hand you saw a profile with 1000 followers and they’re only following 20 people, you’re more likely to think that this persona is genuinely worth following and look more into them.

This is the power of social proof, and something you should bare in mind.

You can make the process of unfollowing people a lot easier using Tweet Adder. They list all the people that fall within the category you enter (E.G People that still haven’t followed you back within two days) and display them there for you to easily unfollow. This is a lot easier then going on Twitter and manually looking for who is and isn’t following you over and over.

Today we’ve looked at a number of things you’ll need to think about when promoting your music on Twitter. As I’ve mentioned, Twitter is one of the best social networking platforms for getting your music in front of new eyes. While Facebook is better for keeping up the interaction with these fans and Youtube better for showcasing your music, Twitter’s roll is just as important. None of these other sites can get you in front of a load of new ears like Twitter can without luck being on your side.

Remember, you can also learn advanced tips and tricks to mastering your music promotion on Twitter and other platforms in our Academy.

By structuring your profile correctly and interacting with Twitter users, you can use Twitter as a great promotional tool for your music. If you’re not yet using Twitter in your music career, I suggest you get started using it now.

If you found this guide useful, please Tweet it or share it on your favorite social networking sites using the buttons below. Thank you.