You are here: Home / Music Marketing / How To Give A Great Podcast Or Radio Interview As A Musician

So you’ve landed yourself a podcast or radio interview. Now what?

It’s not enough to line your calendar with interview opportunities. You have to be prepared to deliver the goods. If you don’t give interviewees what they’re looking for, you’re not going to get any calls back, and that defeats the entire purpose of using audio channels to gain more exposure for your music.

So how do you give a great interview? Here are several tips you can follow.

For Radio Interviews, Know Who You’re Talking To & Who Their Audience Is

The interviewer is going to be putting a considerable amount of time into researching you and your music (if they’re any good). The least you can do is learn about them and who their audience is too, right?

This doesn’t necessarily mean that you need to spend hours learning about the station or the podcast, but you should at least cover the basics; the name of the show, the station, the host, and so on.

Knowing a little bit about their audience is also helpful, as you may be able to throw in a few references that would make them smile. The host is trying to deliver relevant content to their audience, so whatever you can do to help out is going to go a long way in opening up new connections in the future.

Interviewees who give quick, succinct answers often come across as being indifferent or arrogant. Unless that’s your intention, you’re probably going to want to take a bit of a different approach.

Although you might be a little nervous to give an interview – and that’s perfectly okay – you should be offering the interviewer plenty of content to work with. Make them want to ask follow up questions!

Of course, make sure not to go overboard. Finding the right balance is a little tricky. Short answers are bad for radio and podcast shows, as are answers that are too long. However, a good host will also take responsibility and be prepared to interrupt as necessary.

Just keep in mind that media people – especially those with a journalistic background – are always digging for great stories. Story makes for more compelling media.

Don’t forget to add value whenever you can. Talk up the hosts or the stations, and show that you appreciate what they’re doing.

Internet Techniques For Musicians: Be Patient & Be Prepared

If you’re just getting into podcast and radio interviews, keep in mind that most hosts probably aren’t terribly interested in you. It’s a tough pill to swallow, but it is often the case early in your career.

Your first few interviews may not be the dote-fest you expected they would be (you may not get more than 15 minutes, you may not get booked during prime time, etc.), but that’s no excuse to become impatient and lose your composure. 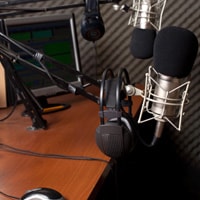 There may even be times when the host or DJ hasn’t taken adequate time to prepare. In cases like that, you’ll have to lead the interview, and try to nudge things along in a productive direction.

If you stay at it, you will get better interviews opportunities in due course, but just remember that you’re not going to get preferential treatment in the beginning.

Being prepared can also mean making sure that you’re sober, awake and alert enough to do the interview in the first place. It may seem like common sense, but it’s worth mentioning anyway, because you never know where people are at.

Remember To Have Fun

Dead air is a no-no. Putting people down and swearing is frowned upon. Belittling the DJ is self-defeating. Radio is serious business, but that doesn’t mean that you can’t have fun. In fact, it should be your goal to have fun when you’re giving an interview.

I’ve interviewed a lot of people. Many people come into it thinking they’ll have nothing interesting to say, that it will be boring, or worse, they just see it as an unnecessary nuisance (mostly business people).

Then, by the end of it, they’re thanking me for the opportunity! I’m never surprised, because I’m passionate about what I do, and I’m a professional interviewer. It’s important to keep in mind that podcast hosts and DJs generally know what they’re doing, and will make it a great experience for you if you’re willing to put in the effort. It’s called quid pro quo.

Be An Open Book

We’re all human beings, and we all have insecurities, shortcomings, and maybe even some “skeletons in the closet”.

There may be some things you’ll want to keep close to your heart, especially events or occurrences in your life that might incriminate or harm you and/or others you care about in some way.

However, being too mysterious on radio or on a podcast is a sure-fire way to give a boring interview. I look back on all of the interviews I’ve done, and invariably the worst ones were always those in which the guest was unwilling to share who they were, what they were about, and where they were coming from.

There are a lot of factors that can play into whether or not the interview turns out to be a great one or not, but if you’re going to be doing interviews at all, you should probably be willing to share a piece of yourself with the host and their audience.

If at all possible, over-deliver. There are a lot of people DJs or podcast hosts could be interviewing, and yet they’ve caved to your persistence or found you interesting enough to have on their show. If you give them more than what they’re looking for, they’ll want to have you back, and may even recommend you to others too.

Plus, you’re going to stand out from the crowd if your focus is on adding value. Most people are only interested in themselves. Self-important people are usually boring to listen to. Giving a great interview is about seeing things from the perspectives of others, and speaking to them; not at them.