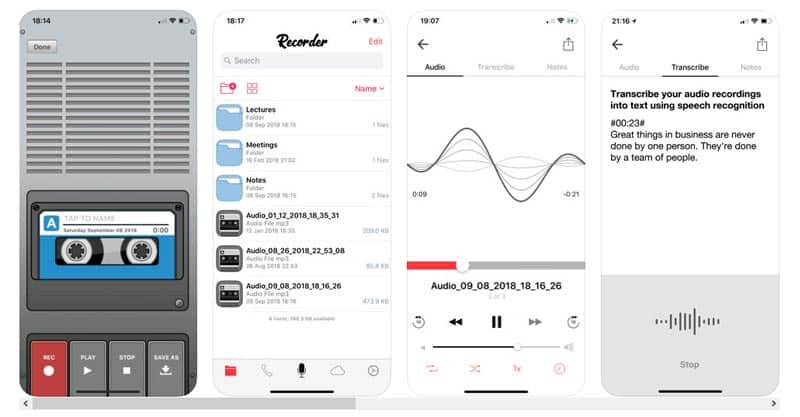 Whether you’re a backup or lead singer, there’s a good chance you play an important role in the band or bands you perform with.

With the help of a voice recorder app, you can be more productive and get better at maintaining your practice schedule.

And, while you’re out and about living life, you’ll likely have ideas come to you. Science shows this is how our minds work – our brains make interesting connections while we’re showering, walking, driving and so on.

When you have a great idea, it’s always best to capture it on the spot so you don’t forget.

This is also where recording apps come in. In addition to helping you bring your ideas to life, recording yourself can be fun and give you a way to evaluate your performance while constantly improving.

So, here are the best recording app for singing.

Some apps are available for both Android and iPhone, and I’ve made note of which can be downloaded for either device.

With that, here are the best Android apps. 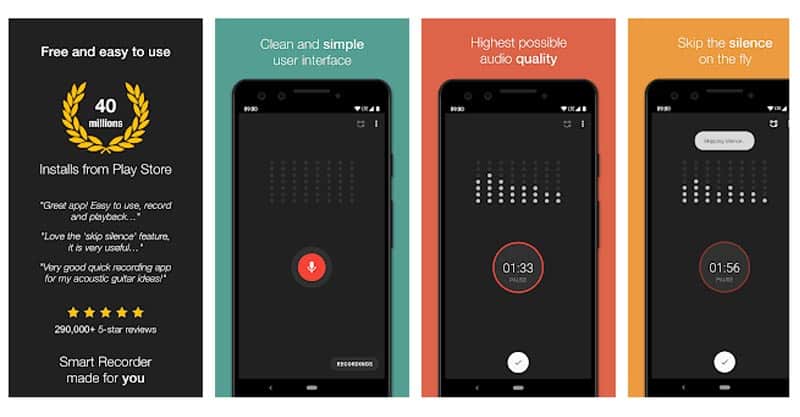 The easy-to-use Smart Recorder was designed specifically for high-quality recording for tracks of any length.

The skipping silence feature allows you to shorten recordings. This is a great feature, because people always leave some dead air at the beginning and end of their recordings.

Although this app does give you the ability to record phone calls too, in some cases local laws may prohibit you from doing this.

So, if you’re planning to record a phone call, be sure you’ve investigated the matter and know that it’s safe to do. 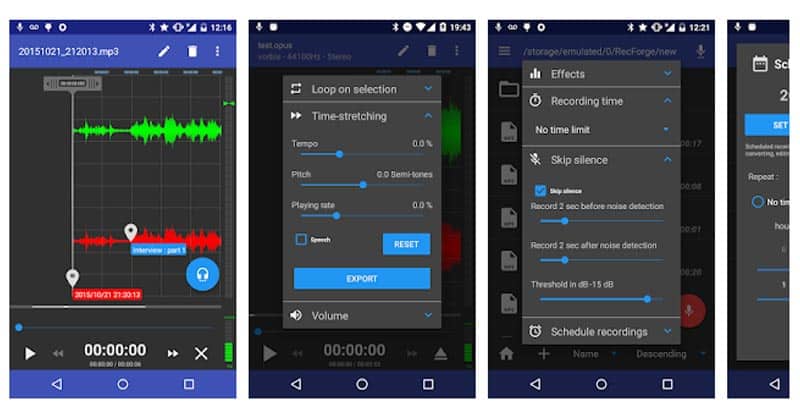 RecForge II is a well-known app, and if you’ve done any digging for yourself, you’ve probably come across it too.

So, if you need to trim, copy, move, sort, convert or delete your files, you can easily do it on the fly.

While the app does feature time stretching with tempo, pitch and playback rate, this probably won’t be of much use to you except for a few giggles.

If you happen to have a RODE lapel or iRig mic, you can plug them in and use them with this app, which is cool.

These and other features make this app worth downloading and trying out for yourself. 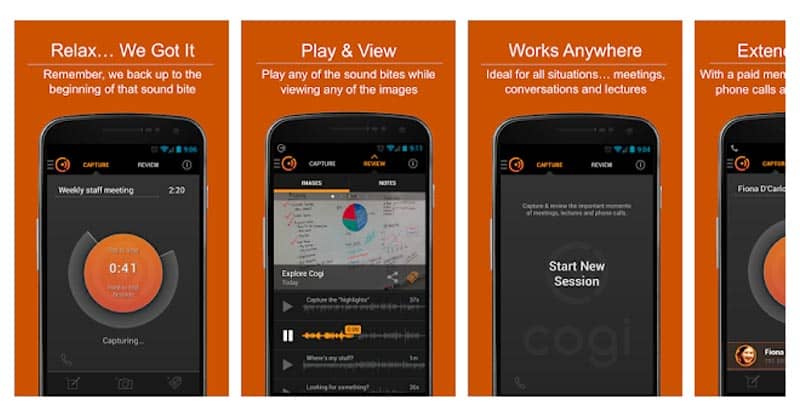 Cogi was recognized by Lifehacker as one of the best voice recording apps available.

This app makes it easy for you to capture audio wherever, whenever. You can even back up your sound files to Cogi Cloud.

There are no limits on how long you can record (subject to your device’s storage, of course) and it captures HD sound.

Another cool thing about this app is you can link photos or other visuals to your voice memos, and even add hashtags and contacts as you see fit.

These and other great features make Cogi worth a look.

Cogi is also available for iPhone.

iPhone Apps That Can Record Your Singing

I must admit – there are some cool voice recording apps for iPhone users. 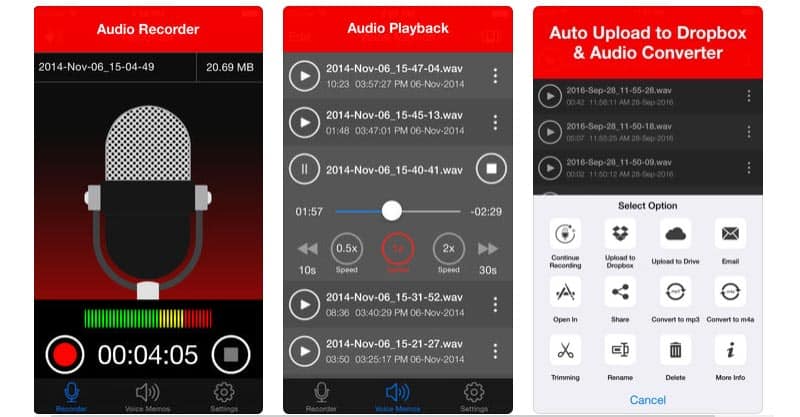 For those looking for a simple and straightforward app, Voice Recorder might be your speed.

Voice Recorder comes with noise reduction technology. You can also edit your recording and save it for later. It even has multiple playback options.

Uploading has also been made simple and fast. There’s a lot to be said for simplicity and this app is a great example of simplicity. 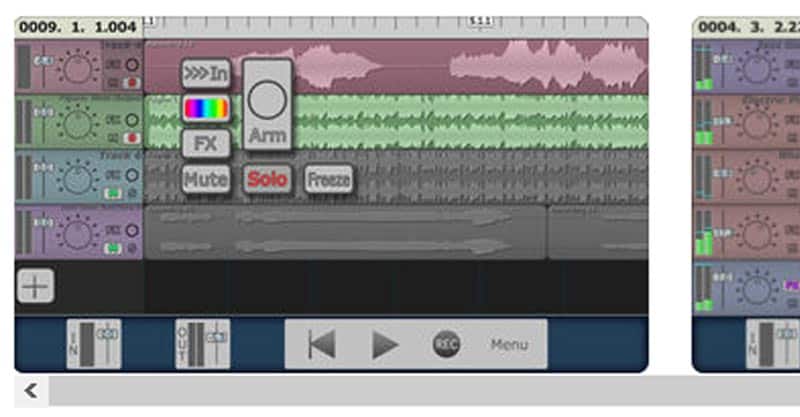 MultiTrack DAW is worth talking about for obvious reasons.

As opposed to just being a voice recording app, it’s also a compact DAW that allows you to experiment with overdubbing/multi-tracking.

If you’re familiar with software recording, this app might be for you. If you’re less technical, perhaps not.

MultiTrack DAW allows you to record up to 24 high quality tracks with multiple takes. You can also share your creations with iTunes File Sharing, email and SoundCloud.

The app comes with plenty of other cool features, so check it out. 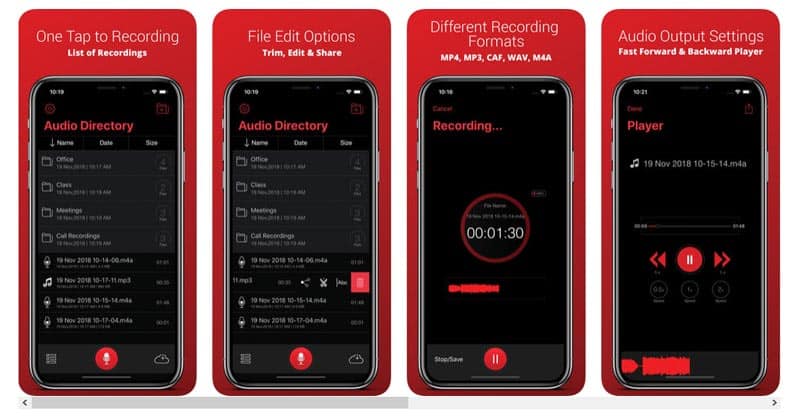 Recorder Plus has got a neat and clean interface, which can certainly help with efficiency.

This simple app allows for one touch recording, can record any length of high-quality audio, and supports several popular audio formats like MP3, MP4, WAV and M4A.

There’s not much more to say about this app. What you see is what you get.

Why Use A Recording App?

There are a variety of apps for singers out there, whether it’s karaoke apps, vocal warmup apps, practice apps, auto-tuning apps or otherwise.

That’s not what we’re covering here. What we’re going to look at are apps that allow you to record your voice and listen back to your recordings.

Despite the many app types that exist, one of the best tools a singer can use is a recording app, because it’s so simple.

You can document your progress. You can record your lessons. You can sing harmonies with yourself. And a great deal more.

You should combined these with other apps for singers; on there you’ll see other apps that do different things too.

What Should I Look For In A Voice Recorder App? 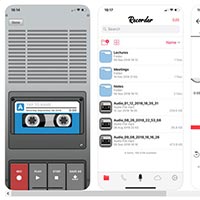 As far as I’m concerned, the easier the app is to use, the better. If I’m just looking to capture a few moments and listen back to them later, I don’t need advanced features.

But you may be looking for a little more, especially if you need to edit and manipulate your files, add notes to them, enhance your recordings with effects and so on.

So, the right voice recorder app will depend on your needs.

With that said, here’s basically what you should look for in an app.

The Ability To Record Yourself

It sounds basic, I know. But if you can’t record yourself, or if the process is complicated, or if it requires the use of external hardware to work, it may not be worth the hassle.

You should be able to open the app, hit record, and go. It shouldn’t be any more involved than that.

The next thing to look out for is recording quality. Recorder apps have come a long way and most allow you to record in high def.

Now, this may not be a big deal for some, especially if you’re just recording sketches and doodles.

But if you’re planning to do something more with your audio files, such as sharing them with band mates, then quality matters.

And, if you’re feeling particularly ambitious, you might even be considering tracking your album using a recorder app.

In most cases I wouldn’t recommend this (recording in the studio is always better), but to be fair, there are no rules saying you can’t.

And, if you’re going to record tracks for professional use, you’re probably going to want to work with high-quality lossless files.

So, make sure you’re happy with the recording quality and functionality.

One more thing to think about is file formats. If your app saves files as universal file types like WAV and AIFF, they should be usable in any software environment.

Meanwhile, some apps save your files as a proprietary file format that most applications can’t read. I know, because I’ve had this issue before. You don’t want to be stuck in that situation.

So, ensure that your app saves to a file format that’s usable across different apps.

As I already mentioned, I wouldn’t necessarily be looking for advanced features in a recording app myself – unless I saw the benefit in them.

But for some people, this is going to be an important consideration.

Some apps are as good as pocket Digital Audio Workstations (DAWs), which is amazing. You can edit and overdub tracks, add effects, change the pitch and more.

For trying out multiple layers of harmonies, these features are nice to have.

Of course, these types of apps tend to be a little more technical in nature, so it may take you a while to figure out your workflow.

I would suggest figuring out what feature set you need and then find an app that matches your specific requirements.

The ability to share is fundamental to a quality recording app.

The reason I say that is because while it’s nice to listen back on your phone, but if you can’t do anything else with your audio files, you’re stuck.

Just think about it for a second. Even if you aren’t looking to share your sketches on social media (you might be), if you can’t send your audio files to your computer, you have no way of backing them up or using them for anything else.

Most apps give you plenty of sharing options these days, so it generally isn’t anything to be concerned about.

But just in case, double check that your app can share to social media, email, Dropbox, SoundCloud and anywhere else you might need to transfer your files to.

Is There A Single Best Voice Recording App To Use As A Singer?

At the outset I want to say that you probably aren’t going to need to use multiple apps.

It’s much easier to label, organize and share your files within one app. Assuming it has the features you need, you only need to use one. This can help you save storage on your device too.

So, with that in mind, there isn’t necessarily a “best app”. You can use whatever you want, assuming you enjoy using it and it does everything you need it to.

Again, the primary purpose of a voice recorder is to capture your voice. If it does that well, it should at least get a passing grade.

Beyond that, it’s just a matter of features and functionality. Your needs will vary.

Sometimes, the simplest apps are the best ones as they allow you to be more efficient. Efficiency allows you to be more prolific, which can make a big difference in the music business.

Is Android Or iPhone Best For Recording My Singing?

Virtually everyone has a smartphone in their pocket, wallet or handbag, so there’s a good chance you already have your preferences in terms of what device you like to use.

I don’t think there’s necessarily a better option as a singer – it’s all about what works for you in your day to day life.

And, as I hinted at earlier, productivity matters. If you can be more efficient on one over the other, that’s the one you should be using.

As for me, I’m used to Android. But I am cross-platform literate, so if I had to move over to iPhone, it wouldn’t take me long to feel comfortable with it.

To offer a generalized overview of the two device types:

So there you go, some of the best voice recording apps for singers.

As I see it, what’s great about recorder apps is that:

So, go ahead and download an app and start playing around.

Improving as a singer can take a long time, but it’s a rewarding process.

And if you’re looking at more apps for musicians, you can see them here.