You are here: Home / Making Money From Music / 4 Tips To Avoid Becoming A Bankrupt Musician 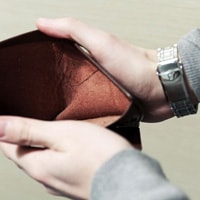 Note: Even if you’ve not at the stage where you’re earning a huge amount of money from your music, please still read, as this is important information that will help you in future.

Unfortunately, a few weeks ago I saw reports of a musician I like on the verge of bankruptcy. It’s a shame, as like many musicians before them, they’ve let their lack of financial knowledge take them from having great blessings to having more or less nothing. Will they bounce back? Who knows. But a lot of musicians in this situation never quite reach the heights they once had.

It’s because of this that today I want to share some tips with you on how to avoid this financial black hole. A lot of it comes down to two things:

By becoming financially intelligent, you greatly reduce the chances of ending up bankrupt if you ever fall into a large sum of money. Most likely for a lot of musicians, this will come from a record deal advance.

With that in mind, here are four tips to greatly reduce the chances of you going bankrupt in future. Please share this guide if useful.

1. Learn How To Manage Money In General

The ability to manage money is a skill in it’s self. The thing is, at school we’re not taught how to do this. We’re given maths lessons, but that doesn’t tell us how to spend / save / invest our money wisely. It’s because of this that a lot of people who suddenly fall into a lot of money end up losing it all some time down the line. You might have heard the stories of people who win the lottery then are bankrupt a few years later?

If you want to get a good record deal but avoid being that bankrupt musician, you need to learn how to manage your money. This isn’t something we pick up naturally; all the adverts around us teach us to buy as much as we can. And due to family and friends not having a proper financial education themselves, they also encourage the view that this is the way to do things.

But while we’re there spending our advance or wages on buying new things, do you know what the rich people are spending a lot of their money on? Let me tell you:

Of course they buy the things they enjoy, but they only spend a % of their income on that. The rest is used to make them more money. With that money their money makes, they can both invest more, and in turn have a bigger % of leisure income.

This is too much of a big subject to cover here, as there is a lot of learn. But if you want to make sure you are in a position to manage your money when you start doing well from your music, you’ll want to start doing your own research. There are lots of sites around the internet that are good for teaching this kind of thing, so have a look around.

One thing you often hear about are musicians getting a big advance, then going out and spending a lot of it in record time. They may go and throw big parties, buy a nice house, or buy a nice car. What some don’t remember is that this advance has to last.

Musicians, record deal advances have to last! Increasing your financial knowledge is essential! – Tweet This

Now imagine your deal is going to keep you under a record label for two or so years. You get a $100,000 advance (for arguments sake, the amount you get will depend on your influence and your predicted sales) with the option to make a % of any money you make once you’ve recouped the advance and other expenses. By recoup, I mean you’ve made the record label back the money they’ve invested into you including your advance, recording costs, promotion costs and everything else.

But what if your music doesn’t sell as well as predicted? What if you don’t make back all the money the record label spends on you? Well, then you’ll have $17,500 a year to live on!

During this time, you’ll still have to work long hours promoting your releases, making songs and doing anything else the label wants. Your expenses will include mortgage payments, car running costs and the general cost of living. As you probably know, you’ll be struggling financially to make this happen.

Now don’t think that because you’re a talented musicians this could never happen to you. No matter how good you are, this is always a very real scenario you have to prepare for.

So when you get your advance, be sure to not spend a lot of it too early. Have it in your mind that this money has to last you as long as you’ll be in the deal, and that this is the only money you’re going to earn during this time. Then budget accordingly. If your music does sell well and you get additional money on top of your advance, treat that as a nice bonus.


3. Only Sign A Deal If It Allows You To Survive

If your advance won’t allow you to live off it alone during the time under your deal, then it’s not enough!

Look at this simple formula:

Advance / (divided by) maximum amount of time under your deal.

So let’s say for you to live comfortably, you need to earn a minimum of $30,000 a year. With that in mind, for each year a record label wants you under contract, they need to give you an advance of at least $30,000.

Of course, if you can command a higher price then your minimum living costs, go for it. But find that minimum figure you’d be able to sign a deal for as you will need to know it.

Anything less then this and you’ll be struggling financially at a time where you don’t have the time to do any more work. After all, you’ll still be working for the label.

If you’re not yet at the stage where you can command an advance with the minimum amount of money you need to live off, then quite simply don’t take the deal. Work on improving your ‘worth’ as a musician, then as you gain more fans and are earning more money yourself, you’ll be able to get a better deal.

My last point is a simple one:

It’s easy to get caught up in the hype of having a record deal and a big advance. You get a lump sum of money and you want to spend it. Furthermore, you’ve told your friends you have all this money, and you start feeling like you want to splash some on them. Furthermore they might start expecting you to pay for things now you’ve got a record deal and a large bank account.

Before you do this though, remember the above. This is money that has to last, and shouldn’t be all spent right away. Furthermore, you should put a good percentage of this money to good use and use it to make you more money.

Put a certain amount into a high interest savings account, and have your money make you more money. Live off the interest if you can, and don’t spend extravagantly.

Just because you have a large sum of money, it doesn’t mean that you should spend it all. And as for feeling you have to buy all the drinks for friends when you go out, just stop it. Some of them will work and may earn the same amount over the year as you would if you budgeted your advance. So don’t feel like you have to buy everything because you got paid your wages up front. That’s how people go bankrupt, by getting used to an unsustainable lifestyle but not having the finances to support it long term. So don’t fall into that trap.

In all honesty, this guide has only touched the tip of what you need to do to stay financially stable in the music industry. The money management side of things isn’t something that’s always thought about ahead of time, and is something that’s often not even thought about when there’s a lot of money around. Whether this is because the musicians who end up going bankrupt feel it’s something they can leave to other people, or because they simply don’t think it’ll be an issue. As many find out though, it is important, and is something that you should really learn.

Money management is a skill that everyone should know. But as we’re not taught it in school, it’s down to you to do your own research and ensure you have the right mentality and knowledge to avoid going bankrupt after you sign a deal.

So, do you have any more tips to avoid going bankrupt after you fall into the money? Or even any general money management tips? If so, share in the comments. And please share this guide if you feel it’s important.