You are here: Home / Guitar / How To Solo On Guitar With Just One String 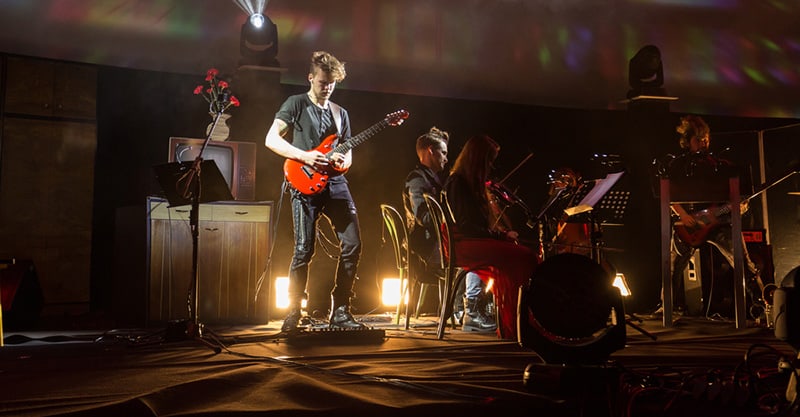 Many beginner and intermediate guitarists find soloing to be a unique challenge.

Within any band with two guitarists, there often is a “rhythm” guitarist and a “lead” guitarist, even if they happen to trade off those roles at times. That’s for good reason. In most cases, the lead guitarist has a bigger bag of tricks than the rhythm guitarist has.

The rhythm guitarist typically strums chords, holds down a rhythm or plays riffs, while the lead guitarist plays complimentary parts to the rhythm guitarist. Lead guitar is often viewed as the flashier style of playing too, especially since they might get a solo in a song.

My philosophy in the last few years has been that I can learn virtually anything if I just take it a couple of notes at a time. Learning a solo might seem like a giant task, particularly when the guitar tab of the entire solo is staring back at you, but when you break a solo down into its components, it proves much easier to learn.

I’ve proved this to myself by learning solos from the likes of Harem Scarem, X Japan, and Lincoln Brewster.

But let’s not get carried away here.

But it can also serve a functional, creative purpose. Some guitarists have been known to challenge or limit themselves in different ways. For instance, a few years ago Richie Kotzen decided to start playing with his fingers instead of with a guitar pick.

So, even if you aren’t a beginner, learning to solo on one string might prove a worthwhile exercise.

Learn To Play The Major Scale On One String

Virtually every guitar solo is derived from a scale.

Sure, some solos might contain chromatics. The scale might change every few bars. But at the end of the day, it’s all scales.

So, if you don’t know your way around the neck yet, and you haven’t learned any scales, this is the fastest path to learning how to solo.

The focus for this exercise is the first (thinnest) string of the guitar. We’re going to be playing the E major scale. That’s mostly a technical detail, and not one you need to obsess over, but it can be helpful to know how the scale might connect to music you already know how to play.

This might feel a little awkward at first, especially if you’ve never played that far up the neck before.

Practice this exercise forwards and backwards slowly, and soon you’ll start to feel a lot more comfortable with it.

Challenge: If you want to take this a step further, try mixing up the notes instead of playing them in order. A solo is just a series of notes played with different rhythms in an order that creates a memorable melody. Try coming up with your own melodies using this scale.

Learn To Play The Minor Pentatonic Scale On One String 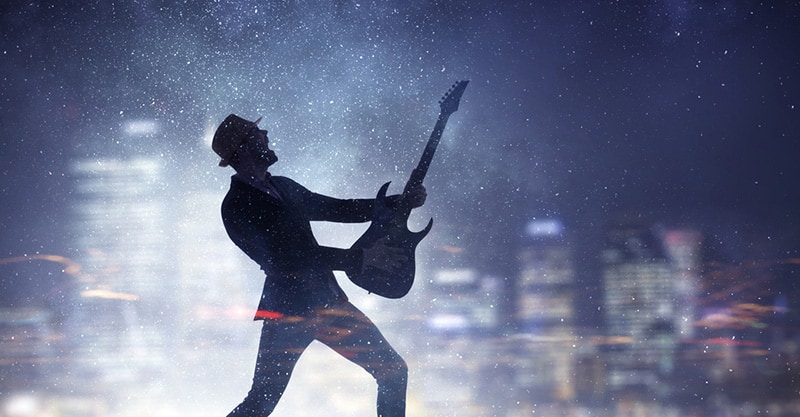 Another great scale to learn for soloing is the minor pentatonic scale. You would be astonished how many solos have been written or improvised with this simple five-tone scale.

It’s suitable for blues, rock, metal, country, and a host of other genres because of its simplicity.

Admittedly, playing it on one string is a little awkward. This is because there is a bigger spread between notes.

The pentatonic scale is often called the “box pattern”, because of how easy it is to master. In some ways, it could be harder to get the hang of on one string, but it’s still a worthy exercise.

You’ll want to practice this scale forwards and backwards.

Notice how the pentatonic scale has a different sound than the major scale.

Challenge: The patterns you’ve just learned can be used on any string, not just the first. So, try playing both the major scale and pentatonic scale on every string of the guitar. This is great practice and will help you get used to the sound of different scales.

Even if you didn’t take the challenge from earlier, at some point you’re going to need to start mixing up the scales to create soundscapes and melodies. We could sit here and learn scales endlessly, but that’s only going to take you so far. At some point, you should start relying more on your ear and your instincts for soloing, because that’s what’s going to make you stand out as a player.

So, if you’re not comfortable mixing it up yet, you may want to spend more time practicing the above exercises before you try the next.

Something important to note: Although you can use all strings in a solo, if you’re only going to be using one string, you should probably be using one of the top three strings – first, second, or third. Playing on the “treble” strings will help you cut through more, especially if you’re playing over accompaniment. The example I’ve prepared below uses the second string.

I’ve already mentioned this, but a solo is basically just a series of notes from a scale (or multiple scales) played with different accents and rhythms.

I’m going to keep things relatively simple for this example, using a mixture of eighth, quarter, half, and whole notes, but it’s important to realize there are a lot more possibilities. I’ve used the B major scale here, in case you’re wondering.

Challenge: Now that you’ve played your first solo, it’s time to play it over a jam track. There are plenty of these on YouTube, and I’ve also embedded one below. Don’t worry about trying to get it “perfect” or play in time. That’s not the point. The point is to have fun and see how the solo sounds when you have proper accompaniment.

Mixing It Up Part 2

Here’s one more “mixing it up” example, just for practice.

This exercise is on the first string and uses the E major scale.

If you felt comfortable with the last example, you shouldn’t have any trouble with this one.

As with last time, the rhythmic patterns are simplistic, so don’t sweat it. Take it slowly and pay more attention to accuracy as opposed to speed. Speed is just a byproduct of accuracy, so if you can play accurately, you can gradually increase your speed.

Challenge: With the second solo under your belt, it’s time to jam. I’ve included another jam track, this time in the key of E. Have some fun playing along to it! 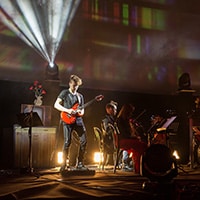 So far, the examples I’ve shared with you have been relatively easy.

It’s one thing to play a solo on one string because it’s easy – quite another to limit yourself to one string when you’re used to playing with as many strings as you want.

At this point, you can start pulling out your bag of tricks if you have any. The only limitation now is you must play the entire solo on the same string.

You can slide, hammer on, pull off, trill, play harmonics, use your whammy bar, and more.

Artists sometimes dislike the idea of limiting themselves in this way, but you may find it easier to come up with ideas when you aren’t faced with an infinite number of possibilities.

Here are a few ideas of things you can do. Feel free to take them beyond.

Just because you’re only playing one string doesn’t mean you can’t play arpeggios.

An arpeggio is the notes that make up a chord (generally three), so that severely limits the possibilities – even more so than the pentatonic scale.

But just for interest, let’s play through a change. Let’s have an Emaj7 arpeggio followed by an Amaj7 arpeggio.

Maj7 chords have four notes in them as opposed to three, so that gives us a little more to work with.

Just so you know, you won’t be playing straight arpeggios here. I’ve mixed up the notes a bit for melodic interest.

In this example, you’ll be playing the arpeggios on the first string.

Challenge: If you aren’t too familiar with arpeggios, see if you can figure out the notes in a G chord and a C chord on your own, and then play them as arpeggios on the third string. 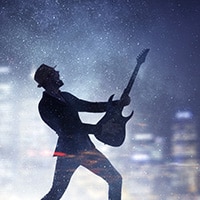 Most guitarists learn to hammer on and pull off somewhere on their journey.

It’s a bit tricky to do at first, but once you get used to it, it becomes second nature and you hardly ever think about it anymore.

Hammering on and pulling off on a single string gets you thinking about playing wider intervals than normal. This can help you come up with some interesting melodic ideas.

Here’s a crash course in hammering and pulling off, but if you don’t already have a basic understanding of how it works, this explanation might not help you a whole lot.

A pull off is kind of the same thing in reverse. Begin by fretting a note, for instance the fifth fret of the first string. Then, while still fretting the note, pull your finger down and off the string. Let it “snap” slightly. Naturally, you can also be fretting a higher note with a different finger, and just pull off the higher note. Or, you could pull off every finger holding notes.

This exercise is on the third string. It’s a little easier to pull off on a middle string than one of the E strings.

Another popular lead guitar technique is a slide. Typically, slides aren’t executed one after another unless you’re going for a specific effect, though there’s no rule against it.

Slides can be used in a few ways and playing on just one string forces you to think about those variations.

For this next exercise, I’ve kept things quite simple, so you don’t need to think too long and hard about slide variations. But I would still encourage you to come up with your own ideas.

This exercise is on the second string.

Challenge: Try slides in combination with hammers and pulls. For instance, hammer on from the open string to the second fret and slide up to the 12th. Or, slide down from the 7th to the 3rd, and pull off the moment you reach the 3rd fret.

There’s more you can do with one string than you may even realize. Sometimes, playing with some limitations can lead to creative breakthroughs, and that makes it all worthwhile.

If you’re new to soloing, then there’s no better place to start than with one string. Keep working on those scales, keep mixing it up, and try to get creative to the extent that you can.