You are here: Home / Music Industry FAQs / How Do Record Labels Make Money? We Reveal All 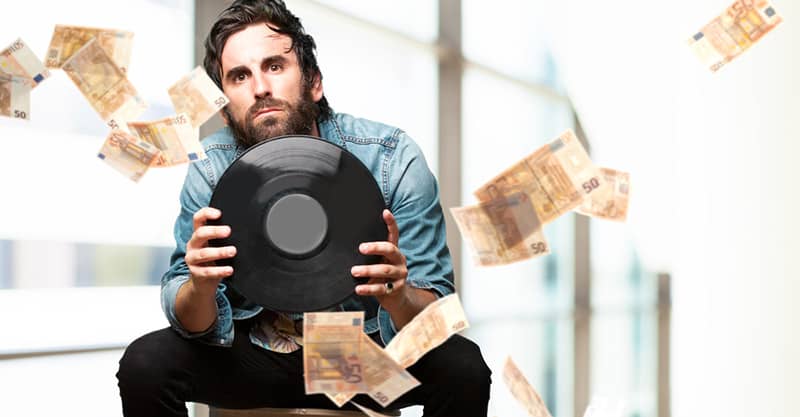 Record labels are a powerful force in the music industry – they always have been.

These days, there are more labels than ever, and more stories about record labels “dying off” than ever before. While it’s certainly true that labels have it harder these days, it’s not at all true that they’ve died out or become irrelevant.

In fact, there are more labels now than ever before.

Hundreds of new DIY and indie labels are constantly popping up. It’s hard to keep track of them all.

Many of these labels do great work for artists; providing a bit of financial assistance and giving them a team and community to work with.

But how do they make money? How does a label, especially a small one, turn a profit?

The answer is: they often don’t.

Labels make money, but unless you’re a big indie label or one of the major labels, you’re not making much money.

Still, it’s a labor of love, and even the small labels do make some income.

If you’ve been thinking about starting a label or are starting to get interested in working with a label, it’s worth knowing how they make their money.

The first important thing to know about labels is how the deals work.

There can be huge variation between deals, and we don’t have enough space to get into all of it, so I’ll break down a basic record deal and how that works for both the label and the artist.

When you sign a label deal, you’re signing a legally binding agreement that allows the label to exploit your sound recordings, in return for royalty payments, and sometimes an advance.

By exploit, we mean that the label will produce physical copies of your music, put it online through their distributor, and sell digital versions of the product.

They will receive all of the money, and then you are paid royalties out of the money they’ve processed.

We’ll get into the percentages later.

Record labels generally want to lock you into an exclusive contract for a certain length of time, so they can exploit your music for a set period of time.

Often, artists will sign to a label under a specific pseudonym or artist name. This leaves them free to do sideman work, feature on other people songs, and potentially pursue side projects.

Some indie labels don’t have the power to keep an artist exclusive, but the bigger labels do.

The “term” of the contract describes how long the label has exclusive rights to the music the artist is making. Sometimes this term is in years, other times it’s in albums. This is also called a release commitment. 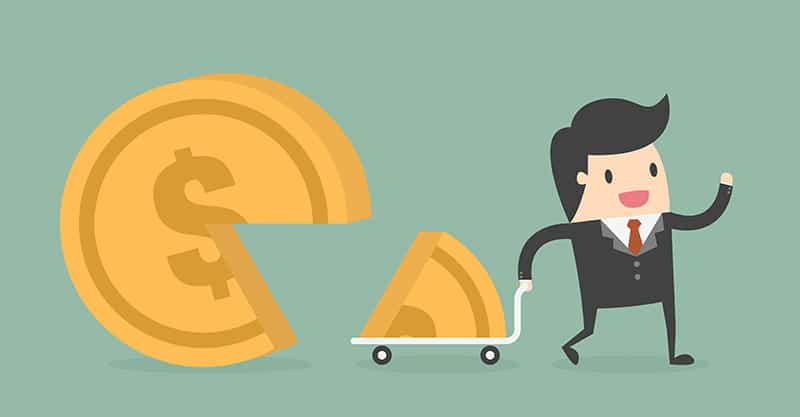 Advances are a sum of money paid to the artist upon signing the contract that will count against future royalties.

Basically, the label gives you, say, $50,000. This is an advance on the royalties they want you to make.

The catch here is, every cent you make selling that sound recording goes towards paying back this advance. Once the advance is paid back, then the contract kicks in, and the royalties are split – often 50/50.

Keep in mind that this advance is recoupable, but not repayable. It’s not a personal loan. It’s an advance on royalties.

If you never pay back your advance, because you didn’t sell enough albums, it’s not going to ruin your credit score.

Advances are often used to merely record the album. They’re not often enough to actually live on.

After the label has recouped the money they spent on an advance, you will get a portion of the royalties earned on your sound recordings.

On the publishing side, you’ll get 100% of your royalties, unless you’ve negotiated away a chunk of your publishing rights to a publishing house or to the record label.

It’s very common for artists to receive only 50% of the royalties they are entitled to, as they’ve negotiated away these rights for other reasons.

In the most basic sense, a label pays an artist an advance, works their album, gets a team behind the album, and tries to sell the album.

Sometimes, small indie labels won’t pay advances, because they don’t have any money.

However, it’s still the same idea. The label releases the music, promotes it, maybe prints CDs/tapes/vinyl/whatever, and does their best to push the artist forward. In exchange the artist gives up a percentage of royalties.

Please don’t read this and think you know everything there is to know about record deals.

If you want to know more, do more research. Record deals come in many shapes and sizes and they can be quite confusing. What you’ll find here is just a basic rundown.

So, now that you know what a typical deal looks like, you’re probably getting an idea of how labels make money.

However, a modern record label’s revenue stream is more diverse than many people expect.

Here are some of the ways record labels (big and small) make money in the 21st century.

As mentioned when we were talking about deals, the record label’s primary source of income is on the royalties you earn as an artist.

On digital sales, the artist gets between 60 to 70% of the money someone paid to buy it. The rest goes to the retailer. That 60 to 70% then gets split up between the artist and the label, according to the contract.

It’s the same thing with streams. If you make $3,000 because a song you made got streamed on Spotify many times, you’ll be splitting those royalties with your record label.

Generally, the record label releases albums through a distributor. The money gets paid to the distributor, then to the label, and then to the artist in the form of royalties.

Music publishing and licensing are increasingly important for labels and artists as sales decline and streaming pays less.

If you get signed to a bigger label, you’ll probably have signed away a chunk of your publishing rights to the label.

Publishing refers to composition itself – not just the actual sound recording of the song.

So, if another artist covers your song and makes money off of it, you are entitled to royalties on that song. If you’ve signed away some of your publishing rights, the label will get a chunk of those royalties as well. 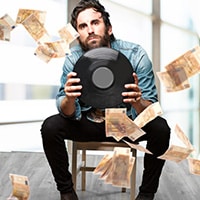 If a movie uses your song and pays you for it, the label will get a chunk of the money that you make on that licensing deal.

Keep in mind that even if you aren’t signed to a label, you should still be collecting these royalties. PROs or Performing Rights Organizations collect these royalties and pay them to artists and labels.

Read our guide on Performing Rights Organizations for more info, and to learn about what PROs do, which one you should register with, and more.

You collect performance royalties when your song is played on the radio or live at a show.

Even when you play your own music at your own show, you are entitled to performance royalties.

To claim these, you need to submit set lists to your PRO every time you perform.

If someone else plays your song and reports it, you’ll then get a little bit of royalty money.

If your song gets played on the radio, you get a bit of money.

All of this falls under publishing rights. So, if you’ve signed away some of your publishing, some of the money you make from performance royalties will go to the label.

Labels are often earning money by handling merch for their artists.

Sometimes, labels will front the money for merch, communicate with the printer or whoever is making the merch and then provide the artist with stuff to sell.

Labels usually sell merch on their website. Sometimes, all of an artist’s online merch sales will go through the label’s online store.

Labels take a chunk of all CDs sales (because those are the rights you sign away on the master recording) and potentially they’ll take a little more if they’re pressing them.

Same thing for shirts. The label will take all of the money earned on shirts they’ve printed until they’ve paid back for the shirts.

After their investment is recouped, the label and the artist would split the profit on the shirts in whatever way they’ve arranged the deal.

Sometimes, labels will have their own line of merch.

This mostly applies to larger indie labels and small indie labels. These labels are usually doubling as promoters, agents, and publicists, so they have enough public presence to sell merch.

Some labels spend a lot of time and energy curating a brand, which allows them to sell merch.

They’ll put on “label nights” showcasing a bunch of bands on their labels, or they’ll just straight up put on shows and promote them.

Many indie labels started out as promoters and eventually became labels.

Booking Tours/Shows For Their Artists

Only indie labels really book shows and tours for their artists, but it does happen.

This tends to benefit everyone, as it takes the pressure off the artist, and booking agents/labels tend to have better luck booking gigs than DIY artists.

Generally speaking, booking agents take no more than 15% of the gross income on a show. Potentially more if the booking agent is also promoting the show, and thus investing in the show. 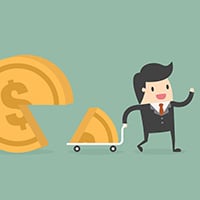 More and more, record labels are putting on festivals.

Many small indie labels put on their own festivals within their local scene.

Indie labels have tons of connections around their music scene, so putting on a small festival is a great way to get in the public’s eyes more and to potentially make money.

Like anything in the music industry, festivals are also a good way to lose a bunch of money. Done well, a festival can be a great addition to a record label’s services.

Some Record Labels Apply For Grants

The grants available to record labels vary wildly from country to country.

In Canada, most small indie labels exist solely because of government grants.

In other places, no grants exist for labels at all.

Governments give record labels money, so that record labels can pay advances to artists. It’s very difficult for most labels to come up with cash to give to artists, and that’s where the grants step in.

The idea is to stimulate the local music economy and to bolster the music scene. It gives people jobs and it creates a creative local environment.

Again, most record labels don’t make much money. But if it is run properly, a label can be of great assistance to an artist.

This creates a cycle that allows labels to thrive and grow.