You are here: Home / Guitar / How To Order Your Guitar Effects Pedals For the Best Sound Possible 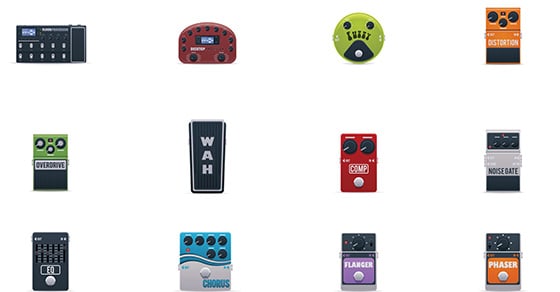 A guitarist’s collection of gear inevitably grows, shrinks, and fluctuates over time.

This is because a beginner often starts on inferior equipment – instruments, cables, pedals, amps and accessories that may be good enough to practice on, but aren’t ideal for recording or performing.

And then, as they continue to grow and learn, guitarists usually exchange their cheaper gear for more expensive gear, trying out different things and figuring out what they like in the process.

But almost inevitably, a guitarist will come to a point in their journey where they meticulously select and buy a group of individual compact pedals to round out their effects inventory.

While this isn’t the only way to get great tone, it does allow for a lot of customization. You can line up an Ibanez Tube Screamer alongside a Strymon blueSky, MXR Phase 90, DigiTech Whammy, and so on. You can pull from the best of all worlds. Fed into a classic, clean amplifier like the Fender Bassman, your effects can really shine.

But hold on a second. There’s more to this than you initially thought there would be, isn’t there? As your pedal selection increases, you need to connect them all to a power supply, mount them on a board, link them up using pedal cables… And then there’s some decisions to be made in terms of plugging into the front of your amp or using the effects loop.

Worst of all, if you don’t order your effects correctly, you could get some pretty funky sounds coming from your amp (and I don’t mean in a good way). So let’s talk about how you can order your pedals for the best sound possible.

The Basics Of Ordering Your Pedals

There are no hard-and-fast rules with pedal order – only guidelines. I have even pointed out some exceptions in the tips that follow. Following these basic guidelines, however, will generally make your life a lot easier.

As with music theory, if you’re going to break the rules, you should be conscious of the rules first. If you don’t know why things work the way they do, then it’s best not to mess with a pre-established system.

But this is good to know in case something just isn’t working with your pedal order, and swapping out one for the other makes it all better. Better to get the best tone possible than to be a slave to the rules, right?

We’ll explore this in more detail, but the general order for pedals should be:

Note: this does not mean that you need every kind of effect available. In your effects chain, you can skip to the next effect in instances where you don’t have a particular one. For example, if you don’t have a chorus pedal, you would move onto volume, and so on.

How To Order Your Pedals

Here is a breakdown of the different effects pedals that you’ll be using, and what order to put them in.

If you have a tuner, the best place to put it is first in your effects chain. Find a tuner with true bypass if possible.

A top wah pedal can go before or after your overdrive or distortion. This is mostly a matter of preference. Phasers, which are technically Modulation pedals, are also sometimes placed in a similar position to a wah pedal. 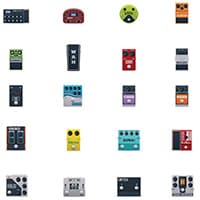 Compression isn’t considered an “essential” effect among most guitarists, but it may prove valuable in instances where you’re playing lots of harmonics, tapped harmonics, or two-hand hammer-on or tapping techniques without any picking.

Again, some guitarists put it after their overdrive, but in most cases it works best right after the wah.

This is where your distortion, overdrive, fuzz, crunch, or gain pedals would go. Some guitarists rely entirely on their amp tone, and don’t use any overdrive pedals. But depending on what you’re going for, you may want a pedal that gets you different sounds.

The Pete Cornish SS-3, for instance, is very distinctive and characteristic of the famous Pink Floyd tone – a tone not easily achieved otherwise.

If you want to further shape your sound, an EQ pedal can come in handy here, and it can even be used as a solo boost. Just don’t go too crazy with the settings.

A brief digression here: if you’re going to be using your effects loop, this is the best place to use it, especially if you’re planning on using your amp’s built-in distortion.

All pitch effects, such as vibrato, octaver, or pitch shifter should come after distortion, unless you want to crank that “suck” knob!

Chorus, envelope filters, flangers and the like should be inserted here.

This is where you would put your volume, noise gate, limiter, or tremolo pedals. This is particularly important if you’re looking to use your volume pedal in conjunction with your delay pedal, as you’ll be able to control your delay using the volume pedal.

Some guitarists will put their volume pedal at the very front of their chains. This may be wise in instances where you need more control.

Now it’s time to put your delay pedal(s) in the chain. This means that all of your other effects will be affected by your delay when it’s turned on.

Some amps have reverb built in, so you won’t necessarily require a reverb pedal. Furthermore, if you prefer an in-your-face sound, you probably won’t be using a lot of reverb on your raw guitar tone.

But if your amp doesn’t have reverb, and you’d like to keep it as an option, this is where you would put your reverb pedal.

As I’ve said earlier, the guidelines mentioned here don’t apply to every situation. Use your best judgment in instances where your configuration should work, but just doesn’t seem to.

The more pedals you have, the more convoluted things can get. For touring and performing, I generally prefer an all-in-one solution, though admittedly there aren’t many quality multi-effects pedals out there. To my ears, The Zoom G3X is the ideal choice, especially if you don’t have a huge budget.