You are here: Home / Guitar / Bluegrass Guitar Lessons For Beginners, How To Play 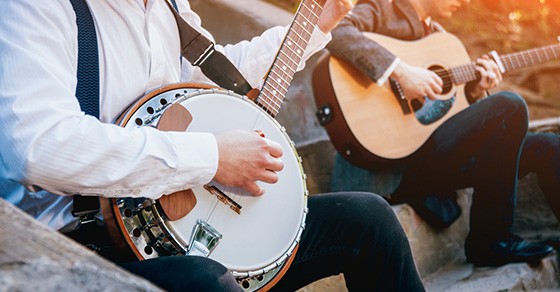 Well, just like most derivative genres, it’s a mix of things – country, folk, traditional, and jazz. It’s usually characterized by a repetitive and fast “boom-chuck” rhythm, which wouldn’t be the least bit out of place in country or folk tunes.

Personally, I like developing fluency in a variety of genres. Bluegrass is just one style on a long list of styles I can play. So, I’m not a purist by any stretch of the imagination. If you want to learn from a purist, go find another teacher.

Fortunately, the basics of bluegrass are easy to master, and if you already know how to pick, strum, and form your basic open chords with your fretting hand, you’re ready to delve in. If you aren’t quite comfortable with these skills yet, it may be worth spending a little time working on the essentials before you dive into bluegrass. After all, bluegrass music will feel fast to a beginner.

With that out of the way, let’s learn some bluegrass!

How To Play Bluegrass Rhythm Guitar 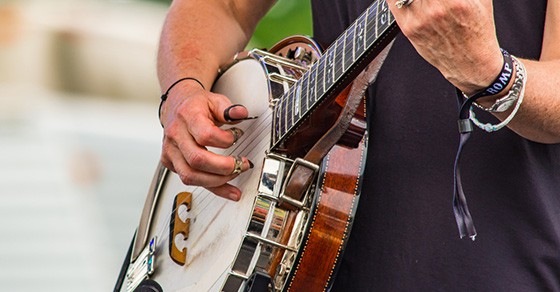 Rhythm is foundational to any genre, and is sometimes the defining characteristic of a musical style.

As I said at the beginning, a “boom-chuck” rhythm is the mainstay of practically any bluegrass song, so that’s what we’re going to focus on here.

The key of G is an easy one to play in, so most of the following examples will use the G, C, and D chords (bluegrass rhythms are generally quarter notes, but for the sake of these examples, I’ll be demonstrating using eighth notes).

This does not sound very bluegrass, even when you accent every second strum (on the &s in between the beats).

This isn’t to suggest you couldn’t “get away” with playing something like this, especially if you’re jamming with others who are more experienced with the genre.

So, let’s work on getting your playing to sound more bluegrass-y.

In example two, the idea is to first pick the lowest note in the chord (on the numbered beats), and then strum the rest (on the &s in between).

Now that sounds a lot more like bluegrass (to some extent, country too)! And, to be perfectly honest, you could stop there. What you just played is the foundation of the genre, and if you keep working on your precision and muting, you’ll become an expert “boom-chucker” before long.

But let’s play the same thing in another key, to reinforce what you’ve just learned.

This example is in the key of D, so you’ll be playing your D, G, and A chords. Hopefully, you’ve worked on these enough to feel comfortable with them. Here we go!

A guitarist is more than just a guitarist in the context of bluegrass. So, even though the last two examples are a fairly accurate representation of how to play basic bluegrass rhythm guitar, it goes a little deeper.

As far as the drumming aspect is concerned, the only thing you can work on to provide a solid backing for other musicians is your rhythm. Practicing with a metronome is recommended. I always find it best to begin practicing slowly, and then gradually work my way up to faster tempos. Do not rush this process. Practice accuracy over speed, because speed comes with accuracy.

But the other aspect is one we haven’t gotten into yet – the bass line.

Though a bass player could easily hang on one note for each chord change, I think we can all agree that this wouldn’t provide much interest or movement to the progression as you transition from one chord to the next.

So, now we’re going to try adding a little more interest to the bass line. We’re going to go back to the key of G now. Depending on your skill level, you’re going to find this example a little trickier, so take it nice and slow.

Ultimately, it doesn’t matter which method you choose, but it’s easier to get that “boom-chuck” quality by using the former method rather than the latter.

With this example, we’ve essentially combined most aspects of bluegrass rhythm playing.

Is this the pinnacle? Have we reached the summit of bluegrass rhythm guitar?

Well, not exactly. Bass lines can get a lot more intricate and complex. You can throw in little fills and lead lines to add some flare to your playing. You can also hammer-on and pull-off notes, whether it be part of the bass line or your fills.

Not all songs require that level of complexity. But I think you’re starting to see what’s possible when you apply yourself to the art of bluegrass.

So, I’m going to give you one last bonus example. The bass line in this one is a little more sophisticated than the last few. Again, take it slowly if it seems a little intimidating. The idea here is to offer a little more interest to the bass line while keeping a steady rhythmic flow.

With that, you’ve learned the basics of bluegrass guitar.

But as I always say to my students, you need to take your time with each example. Many students play these exercises once or twice and get bored. Unfortunately, this doesn’t help you improve. The secret weapon to improving fast is repetition. You need to repeat the same example dozens if not hundreds of times, focusing on your technique, making it tighter and smoother, and perfecting your tempo and rhythm.

Is It Hard To Learn Bluegrass Guitar? 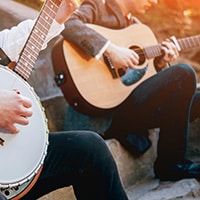 If you’ve made it this far, then you should already have your answer, one way or the other.

Learning to play bluegrass without at least a basic working knowledge of open chords and technique set of picking and strumming will prove difficult. Intermediate to advanced players will want to work on their muting, hammer-ons, pull-offs, precision, rhythm, fills, and other common techniques too.

As with any genre that’s been around a long time, there’s a lot of depth to bluegrass. You can’t master anything overnight – that’s simply unrealistic.

You can learn the basics of virtually any genre in a relatively short amount of time. But if you want to be an expert bluegrass player, that can take a lifetime. There are many nuances to playing at a professional level, and as I pointed out earlier, some people take this technique business very seriously.

I don’t think it’s hard to learn to play bluegrass guitar, or at least learn the fundamentals of it. But if you want to be great at it and not just emulate it, that’s a whole other matter.

How Do I Achieve The “Boom-Chuck” Rhythmic Feel?

One of the most underrated but critical aspects of learning anything is listening. So, before you do anything else, it might be worth just listening to bluegrass music for a few weeks, or even a few months. As your mind begins to absorb the information and puts the pieces together, the rhythmic feel should start to become a part of your personal makeup.

I know some people struggle with rhythm, and if that describes you, you may want to try clapping along with a bluegrass song until you feel like you’re completely locking in with the rhythm. I know this doesn’t sound terribly exciting, but if you can’t clap out a rhythm accurately, how do you expect to coordinate two hands on a six-string instrument that requires you to form complex shapes at a moment’s notice? It’s not going to happen.

Jamming is another good way to pick something up. If there are people in your locality that know how to play bluegrass and seem reasonably competent, you could get them to demonstrate and try playing along. If they’re patient enough, they’ll show you the ropes and get you up and running before long.

Speaking of which, a teacher can also provide much needed guidance as you look to improve as a player. As with anyone else, a teacher had to start from scratch. Nobody picks up an instrument and instantly becomes an incredible player overnight. In most cases, they had to toil through hours upon hours of practice to get where they are, so they know exactly what it’s going to take for you to get to the next level.

Instructors can provide you with inspiration and the training material you need to get to where you want to go. But if you aren’t motivated to improve, that’s nobody’s fault but your own. Others can only show you the door – you must be the one to walk through it. So, make sure it’s something you want, or you simply won’t try hard enough before giving up on yourself.

Will Learning Bluegrass Help Other Aspects Of My Playing? 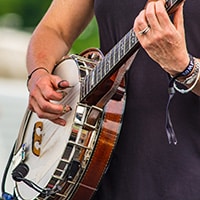 I’m aware there are a lot of players out there who refuse to work on anything that they feel doesn’t directly benefit whatever style they’re committed to learning, whether it’s metal, jazz, or classical.

I believe that everything you learn in any style can help you in all aspects of your playing, even if you have no intention of writing in a specific style.

I know how to play country. I’ve even played a few well-paying gigs, and if I was called upon again, I could easily whip myself into shape for another. But do I write country songs? No, not ever. It doesn’t mean I won’t, but it’s not generally the style I write in.

And yet, what I learned in country helped in a lot of other playing styles. Something a lot of people don’t know is that country is the most aggressive guitar style there is. Snapping and popping strings isn’t something that’s done in a lot of other genres. But I found it worked nicely for funk, which is a style I do play.

As a session player and lead guitarist, everything I’ve learned has benefited me, regardless of the style. I probably wouldn’t be playing with Long Jon Lev today if I didn’t have the versatility to adapt to that style of music.

This is just one man’s opinion, so you can take whatever stance you want, but I absolutely believe learning bluegrass can help other aspects of your playing. Segueing into country or folk, for example, would be easy for a bluegrass player.

Bluegrass is a lot of fun, but practice isn’t always enjoyable. There’s usually a little bit of grinding that happens in the practice phase. Learning something new is always difficult, especially if you’ve never tried anything like it in the past.

Just keep at it, and don’t expect to get good overnight. Give it your best effort, and try practicing every day for 30, 60, and 90 days. If you don’t see progress, you’re probably doing something wrong, and should hire a teacher immediately. Most people would improve quicker if they had a little bit of patience and determination. That’s all it takes – the willingness to persevere even when something starts to challenge or bore you.