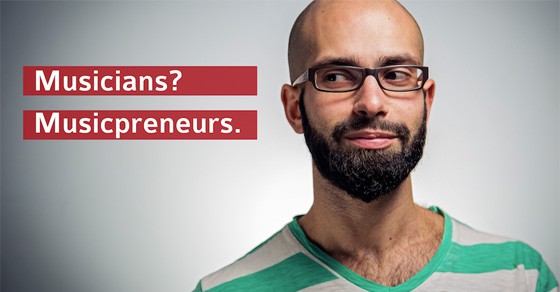 What if I told you you could watch what someone else is doing and use the same skills to better further your own music career? Well you can, and I've got just the person for you to keep an eye on.

Enter Tommy Darker, a musician turned entrepreneur; aka a musicpreneur. He does a combination of making music, marketing music, and teaching others how to progress in their music career.

I've had the pleasure of knowing Tommy for a while now, and just by being around him in person I've truly learned a lot. I'm sure you could to, so I wanted to break down five of the big lessons I think Tommy can teach musicians in regards to better progressing their music career.

So, here are five things Tommy Darker does which you should also implement. If you find these tips useful, please share this guide and implement what you learn.

He achieves this by not only replying to people who message him on social sites, but by actually meeting up with both fans and like-minded people in person on a regular basis. In fact, he often meets up with people a few times a day. All he asks in return is they buy him a coffee or a slice of pizza for his time. The end result being that many of the people who come into contact with him feel like they know him on a more personal level.

Now I know doing this wouldn't be right for everyone, especially as you get a much bigger fanbase. But when you're starting out, making each of your fans feel special is something which could have a positive impact on how quickly your fanbase grows. If you can get your core fanbase super loyal through personal communication, you'll find a lot more word of mouth marketing occurs. Fans will talk about their experiences with you and make others more likely to get involved too.

Not got a huge amount of time? Then instead of meeting up with fans individually, why not do a monthly or biweekly group meet up with them? You could have meals with them, go to the theme park with them or other. Have a mix of music and general talk; fans will really appreciate this.

Get People Involved In Something Bigger

As well as talking to fans of both his music and education side of things, Tommy also has a lot of communication with businesses. But he doesn't approach them with the typical “I need help, help me” attitude which is sure to get you ignored. Instead, he sells them a dream. An idea which people of influence would find hard to refuse.

For example, he wouldn't approach a venue asking for somewhere to perform. Instead he'll tell them his vision, why what he's going to achieve will be good for a whole community, and how being associated with the mentioned movement or project would be good for their business. He doesn't make it about him, and instead sells a bigger vision masterfully. Only at the end will he ask them to get involved; by this point they would have decided if it's something they're interested in, even before he had formally asked them.

By doing this he's managed to secure venues to perform at for free, speaking roles, media coverage and more.

This is something you can do too. Instead of simply approaching places asking them to play your music, you should be doing two things:

This is something that can take a while to master, but it's worth working on. If you can get others to believe in what you're doing, you'll find them a lot more willing to help you out.

Tommy Made Himself More Than Just A Musician 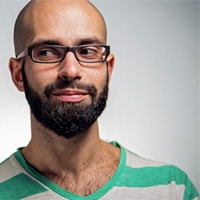 Tommy Darker is a musician. That said, he understands that to progress in the music industry, you need to make yourself more than just a musician. So now he also runs live events where he gets music industry professionals to talk to up and coming musicians on how to progress their music careers.

He writes white papers on the subject, talks at universities on how musicians can progress their music career and more.

This has not only allowed him to earn an additional income from his music career, but he's also built up a lot of relevant and useful links which he may not have been able to get otherwise. This again has led to free usage of venues which would usually have to be hired and more.

While it is possible to get where you want in music by only taking the musician route, if you make yourself more than a musician you give yourself a much better chance of doing well. You can create a news site for your genre of music, start up a podcast, or create relevant Youtube videos which people in your genre will like. Or, on a smaller scale (and if you're doing it more for money than getting more known), you can teach music, let others hire you for your skill and more.

During one of my visits with Tommy, I asked him if I can take a picture of him. He politely declined, saying that he wants to keep up a certain image (his big beard and bald head), and his hair was a bit too long on the day.

Tommy understands the importance of image. While it's not always 100% controllable, especially as more people are watching what you're doing, you should do what you can to ensure people are seeing the side of you you want. Hopefully this is a real part of you as you don't want to be constantly keeping up an act, but be conscious of it.

People who become your fans do so because they like what they see of you. The last thing you want is them taking a liking to you, only for you to give them something different another time and keep switching. Yes there are multiple sides to everyone, but try and keep your core image and message the same. This will allow you to build a core fanbase for the long-term that like you for you.

Don't Be Shy To Ask For Help (But Also Help Others)

As I mentioned before, Tommy sells an idea and / or gives away something before he asks for anything. That said, he still does ask. This is important if you want to get anywhere; you can't be too soft as relationships should be two way. Both parties need to benefit or the relationship will break down.

Now, in the music industry you'll come across those who only want to take. To be honest, a lot of musicians are like this. They're quick to try and get funding or exposure on someone else's platform, yet they don't think about what they can do for the other party in exchange. And I'm not just talking about giving them a song; that's not a big deal as they can get songs from thousands upon thousands of other artists.

So, as long as you're benefiting others, don't be afraid to ask for help along the way too. If you can build up mutually respectful relationships where you both benefit each other this is ideal.

So there you have it, five big lessons you can learn from Tommy Darker. Do you know Tommy? Are there any other things you've learned from him? Let us know in the comments below.

Are you ambitious? Do you want to see your music career grow like never before? Do you have the desire to best your competition whenever and wherever possible? Standing out from the crowd as a musician isn’t as hard as it may seem. It means adding a little bit of extra to your ordinary, which…

To give yourself the best chance of making it as far as you want with music, you need to have the full package. Making good music isn’t enough to stand out from some of the biggest musicians in your genre; you need to have the right drive and personality too. This is something many people…