One way to get more exposure for your own music is by leveraging other people's audiences.

If you're familiar with guest posting, then you should already have an idea of how this works.

When you guest post on someone else's site, you have the opportunity to be seen by an audience that you might not be able to otherwise. You can turn that traffic into email subscribers, social followers, product purchasers… whatever you want.

You'll probably see an increase in interest over the short term, but there probably won't be much of a long term benefit. This is why it's important to keep doing it on a regular basis.

The same can certainly be said for working with musicians that are bigger than you – if you really want to make a go of out, you'll need to do it frequently.

Keep in mind – you don't necessarily have to set your sights on the moon. You can begin by seeking out musicians that are a step or two ahead of where you are and build up from there.

So here are some tips on building connections and recording songs with other musicians.

1. Stalk The Musicians You Want To Collaborate With

And no, I don't mean in a creepy way.

Look, by and large, we all tend to think way too much about ourselves, and we don't spend enough time thinking about how to compliment and serve others.

If your desire to collaborate with someone is genuine – and by that I mean you really want to work with them – then getting to know who they are shouldn't be an ordeal.

Check out their website and their social media profiles, and learn about them. And then, start commenting on their blog posts and their YouTube videos. You can even do a “deep web” search with a tool like Pipl. When you're ready, email them.

Again, make that email about them. Once you've built up a relationship, then (and only then) present the idea of working on a song together.

So to recap, the goal here is to:

It may seem a little time consuming to go about it this way, but it is a surefire way to make someone feel important. From there, who knows where it might lead.

2. Record A Song In Their Style

It has often been said that you can't orchestrate destiny, but this is one of those strategies that might help you create that spooky “meant-to-be” type experience.

Let's say that a musician bigger than you has a song you really like, and you wouldn't mind recording a song in that style yourself.

So you start putting the pieces together. You get the rhythm tracks (drums and bass) down, you track the keyboard, the vocals, but oh wait… the guitar just isn't right. 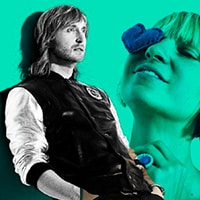 So you reach out to the bigger musician and say:

Hey, I really enjoyed your song, “[song name]”, but it's the oddest thing. I'm in the studio right now recording a song that sounds a bit like it. I wasn't even aware of the similarity until my drummer pointed it out. Anyway, I'm having some trouble getting the guitar right, and since the song is more or less a tribute to you, I was wondering if you'd be willing to show us how it's done and lay down some tracks for us.

Was it fate that your guitar parts didn't work, or was it planned? I'll leave that up to your imagination.

But you're appealing to the ego of another individual, and if they say “no” to such a request, you probably don't want to work with them anyway. I know that I wouldn't turn down an opportunity like that.

3. Show Them What You've Got

In 2013, after roughly 10 years, one of my favorite Canadian musicians – Remy Shand – came out of the woodwork and started sharing new music on YouTube again.

He posted a song called “Rollergirls” along with the message:

Please feel free to add some tracks to this, sing over it, or just whatever! Make some art using what I've done as the foundation. Re-post it after you've added something and send me the link so I can put it up here. I'd love to hear what you come up with. 🙂

And guess what? Fans did just that, and there were actually some incredible submissions.

So I'm not suggesting that you do that exactly, but why not add your own bits to a bigger musician's track – maybe one that's kind of sparse.

Add drums, guitar, keyboard – whatever you're comfortable with – and send it off to the musician in question, along with the note, “if you like what you're hearing, maybe we could work together.”

With any luck, they'll like what you added to their vibe, and you'll have the opportunity to collaborate on a new song with them.

4. Make An Offer They Can't Refuse

Again, not that kind of offer. No blackmail, please.

But it's worth thinking about whether or not you can provide some kind of incentive to the musician you're looking to work with.

It could be access to an audience they aren't able to reach, a valuable industry connection, a promo spot on your blog, podcast, or YouTube channel, maybe even some kind of financial remuneration like a small honorarium.

If you want to collaborate with musicians that are bigger than you, you better make sure that you're good.

You don't have to be amazing, but you should know your stuff. Nobody wants to work with musicians that can't sing or play their instrument well.

If you're still in the process of figuring out your sound and grinding it out, hold off on reaching out to other musicians. Master your craft, and then start connecting with people that are complementary to you.

That's a key point, because you really don't want to work with other musicians that don't bring out the best in you, and vice versa.

As you’ve probably heard, a fair part of getting far in the music industry is who you know. While it’s possible to make an income from music without knowing all the big shots, having a good network around you definitely makes progression easier. With that in mind, today I’m going to show you some networking…