Here's an article on how to say no to those looking for your help in the music industry, without looking mean or burning bridges.

Rejection is just part of the game. Established people in the music business simply don't have enough time to deal with the many people who contact them every day, as they're busy working on their own projects.

When you're starting out, most of the people you reach out to for help will reject you. You'll think it's unfair, but as you start to make a name for yourself, you'll start to get other people reaching out to you. As you won't be able to form a mutually beneficial relationship with many of them, you'll be forced to reject these people in their requests. This is especially true as you get multiple people approaching you each day.

Now, while it's inevitable you're going to have to say no to some people who look for your help, it's important to note that you don't have to be rude or disrespectful about it. It has become common culture in the music industry to simply lie and say you're going to do something, then simply not. Or further more, ignore the person when it suits you.

As with everything, there's a good way to do things and a bad way. This is the bad way. Just because it might have been done to you, don't pick up other people's bad habits and dish them out as you get bigger.

Did you like being on the receiving end of that treatment? No, so don't do it to others. Here's a better way to say no to help requests in the music business while still being polite.

Try Not To Lie To These Other Musicians

An easy way out of rejecting someone's request is lying to them. They may ask you to feature one one of your songs and you tell them that you don't want a feature on that track. That's all well and good if it's the truth, but what if you end up having someone else on that same track, how will that make you look?

While the person might get the hint and not ask you to feature again, this doesn't give off the best impression of yourself. Why not instead just tell the truth and tell them you have someone else featuring on the track? And if they then suggest featuring on another track but you don't currently want to work with them, you can let them know you've a set plan of who you currently want to work with so won't be able to do a song with them any time soon. If you're ready to do a song with them in future you'll get in touch.

That is one way of telling someone you can't do a song with them without it sounding rude and without you lying. You've told them you'll get in contact if collaborating with them ever works for you in future, so you're leaving the door open to potentially work with them in future. Who knows, they might improve and be a good person to work with down the line.

Point Them In Another Direction If You Can 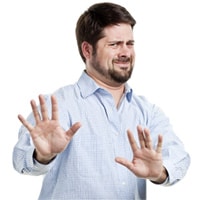 So let's say you've told someone you can't work with them. Should you leave it there? Well, ideally not. If possible, you should give them a quick suggestion as to what they could potentially do next. While this isn't always possible (you may not know what they should do next, or you might get too many people reaching out every day to have the time to always do this), if it is possible you should go for it.

How appreciative do you think someone will be if you let them know a better alternative than working with you, rather than just giving them negative feedback? For example, if they're approaching all the biggest musicians in your genre including you, they'll face a lot of rejection. But if you suggest they approach musicians of a similar level who will actually be up for collaborating, they're more likely to remember you as the person who set them on the right path. Hopefully they'll be kind enough to help support you in future too.

Or if they approach you to promote their music and it's not something you do (e.g if you're a musician so only really promote your own material and the music of your collaborators), you could let them know of a website which covers independent acts and let them know they'll have more luck contacting promotion platforms rather than musicians.

Of course, some people will take the advice and forget about you. Others won't take the advice at all. But there will always be a group who take on board what you say and not forget the help you've shown them. This'll take an extra minute or so, but it'll help you build up a lot of respect and possibly even new industry fans and links who you wouldn't have got otherwise.

Don't Be Harsh, But Provide Honest Feedback If Genuinely Requested

If you're letting someone know you can't work with them, it's important you're not harsh with them. Even if you don't think they're a good musician, you don't need to be horrible about it. There will always be people who dislike you and are vocal about it, but you don't want to encourage it if you don't have to.

That said, if someone asks you for honest feedback and you have the time to give it, why not? That's if you can be constructive and let them know the areas they can improve on.

This way you've let them know where they can do better in between two positive things, making it appear less harsh than if you was to only list bad.

Of course, only give honest feedback if they ask for it. Don't volunteer it if they don't as not everyone likes honest feedback and can take offense if you point out areas you feel they need to improve on.

Encourage Them To Keep Going

Last but not least, sending a little bit of encouragement their way won't go a miss. As you don't want to end this relationship from potentially picking up again in future, you want to show them that you have their best interests at heart, even if this isn't the right time for you to work together.

Something as simple as saying “Good luck with it all” or “I'll keep an eye out for what you're doing” can go a long way towards helping them stay good with you, even if you did reject them.

A quick bit of encouragement doesn't take much to do, but can really help how things pan out between you in future. As people often don't get this kind of treatment in the music industry, it'll be easier for you to stand out as someone they like. Furthermore, they might even go on to support you in future too.

Rejection is part of the music industry, but when it's your turn to reject, you don't have to be horrible about it. Use the above tips to politely turn someone away yet still have them on good terms with you.

Do you have any other tips to reject others in the music industry politely? If so let us know in the comments.

Whether you want other musicians to form a band or group with, someone to collaborate on songs with, or just meet up and talk to, there are options out there for you. And as with most things these days, it all starts online (although many of these connections you make will be live in person)….