You voice is an instrument unlike any other – you use it for so much more than just singing.

It’s also intricately tied to your physical well-being and health. A healthy lifestyle leads to a healthier voice.

Singing is strange, because it comes so naturally, and yet there is definitely a right way and a wrong way to do it.

Over time, singers who have never had formal training often develop bad habits. Part of the problem is that you’re often singing in spaces that are not conducive to healthy habits – bars, late nights, loud places.

And you’ll end up developing bad habits just from speaking in an environment like that.

Here are a few bad habits that you should try to break as soon as possible.

Speaking Loudly Before & After Shows

This is the single biggest voice killer.

I can’t count how many times I’ve played a show, hung out afterwards, stood by the merch table trying to chat with people, and talked myself hoarse.

It takes a great deal of effort, and it might even weird people out, but you need to make an effort to speak at a normal volume at all times. Otherwise you’ll wreck your voice.

This is especially applicable on tour. Yelling at people night after night is a disaster.

Overusing Your Voice On A Day To Day Basis

As a musician, you can end up doing a lot of singing.

And, one day, after a week of this, he lost his voice.

It was incredibly frustrating for him, as he was right in the middle of his creative process, and all of the sudden he couldn’t sing.

The truth is, you are not meant to sing more than a few hours a day.

You need to limit your singing to three to four hours per day at most and within that, you need to take breaks and remain hydrated too.

Don’t leave all your vocal recording to one big chunk – break it up with instrument work and editing.

Compulsive Throat Clearing Is Another Bad Habit For Singers

Vocal coaches used to recommend other ways to clear your throat without actually clearing your throat.

This doesn’t really work. Clearing your throat is the most effective way to remove mucous from your throat.

However, people develop a compulsive throat clearing habit out of nervousness.

This habit should be broken. Throat clearing puts a big strain on your vocal cords and leaves you feeling hoarse.

Be aware of how often you are clearing your throat before and after vocal takes or in between songs.

Overusing Caffeine & Alcohol Is Bad For Your Voice

Ahh, caffeine and alcohol. Two of my favorite things.

Drinking coffee and alcohol isn’t necessarily going to ruin a performance, but it’s not going to help.

Alcohol may make leave you feeling more confident, but it also causes the muscles in your throat to constrict, which can affect your range.

Coffee and caffeine contributes to dehydration and excessive dryness in your throat.

Of course, I’m not going to tell you to stop drinking coffee or alcohol. That would be hypocritical of me.

However, if you’re worried about it, make sure to have a glass of water with your coffee or beer. This helps re-hydrate your throat and keep you hydrated in general.

Which brings me to the next bad habit.

I am very bad at staying hydrated. I don’t often feel thirsty, so I’ll go too long without hydrating, and then when I am thirsty I reach for alcohol or coffee. Not a good habit.

It’s recommended that you drinking eight to 10 glasses of water per day, but I personally cannot do this.

Instead, I’ve been trying to fill up a water bottle at the beginning of the day and keep it on my person. Sip it whenever I get the chance.

Staying hydrated isn’t just good for you voice, it’s good for your general health. If you get frequent colds and headaches, try increasing your water consumption.

Warming up can be kind of boring and lame. I get it.

That said, you don’t go for a run without stretching a little bit before! So, you shouldn't sing without warming up either.

A few years ago, I toured with a band that would warm up vocally before every show. Just five to 10 minutes of vocal warmups in the green room.

Of course, not every venue has a green room. If you need a space, try warming up before you leave the house, or warm up in the car.

Doing a few minutes of vocal warmups will leave your voice feeling ready to sing.

Doing it with the whole band (if you’re all singing) can focus the band’s energy, and leave you feeling ready to play a great show.

Another fun practice is looking up “cello drones” for tuning. Find the cello drone that is in the same key as your first song, and sing along to just the drone. Doing this will center your pitch, and you’ll end up singing with better tuning.

Posture is a tough one for a lot of artists.

If you’re playing an instrument while singing, you’re automatically compromising your posture.

Spending time in a van or hunched over a computer screen will also negatively impact your posture.

Generally, singers tend to collapse their chest and rib cage, which leads to a corresponding fall of the head and neck. This impedes the voice and doesn’t allow it to fully resonate throughout the chest and body.

Alternatively, you can end up with a hyper-extended or stiff posture that results in tension throughout the entire body. This often happens when you’re reaching for high notes or feeling nervous.

Working with a vocal coach can help you correct these issues. Many singers also study yoga.

When you start singing, you need to be aware of how you are attacking the note – be aware of the onset of the note.

Some singers use a glottal attack, which is too hard.

Your vocal cords vibrate together like two bands to create noise. The space between the cords is called the Glottus. Sometimes, when you attack a note too hard, your vocal cords come together, creating a harsh sound and sometimes an unpleasant feeling.

Can you feel that the attack on those syllables is a little harsh?

This is as a result of approaching these syllables/notes too quickly.

You can avoid this harshness by approaching them more gradually. Instead of saying the word all at once at the same volume, ease into the words.

If you’re repeatedly using hard glottal attack whilst singing or speaking, you can develop vocal nodes – every singer’s worst fear.

Vocal nodes are hard, rough growths on your vocal cords. They can be tiny, or as large as a pea.

Vocal nodes can prevent your vocal cords from vibrating normally, resulting in a loss of vocal control, a hoarse voice, and sometimes pain.

If you don’t know what vocal fry is, I would recommend just looking it up. It’s easier heard than explained.

Basically, there are four ways you can produce vocal tones.

Modal and falsetto is what most people use to sing.

Vocal fry is the lowest mode of producing tones – it basically closes the vocal cords and allows just little bubbles of sound to come through.

You can produce this sound by saying “ahh” with as little force or breath as possible.

A lot of singers use vocal fry at the beginning of their notes, because it sounds sexy.

Now, for a while vocal coaches were recommending this habit be squashed altogether.

In recent years, thinking has evolved. It’s probably fine to use vocal fry while singing, as long as you’re careful with it.

Be aware if you’re starting to slip into vocal fry while speaking. Like anything, overusing this tone of voice can start to wear on your vocal cords and potentially produce nodes.

I can’t count the number of friends I’ve had that have waited until their late-20s and 30s to see a vocal coach and work on their singing.

How many other skills do you have that you’ve never received any kind of training for, rarely practice, and yet use often? Not many!

Vocal coaches give you what YouTube and articles never can – individualized attention and suggestions.

Nobody cares more about your voice than you do, and nobody can help you with it as much as a dedicated vocal coach. 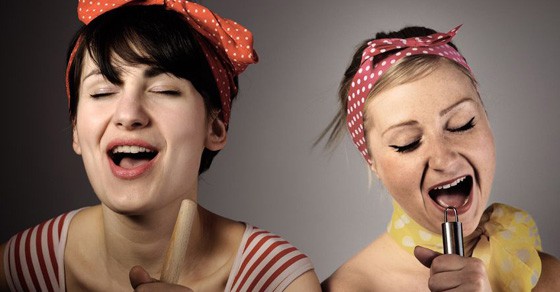 So let’s say you want to learn how to sing better, but can’t afford to take singing lessons. Is it still possible to become a better singer without expert tuition? Yes, it is! And we’re going to look at some of the things you can do to improve your vocals over the next few minutes…. 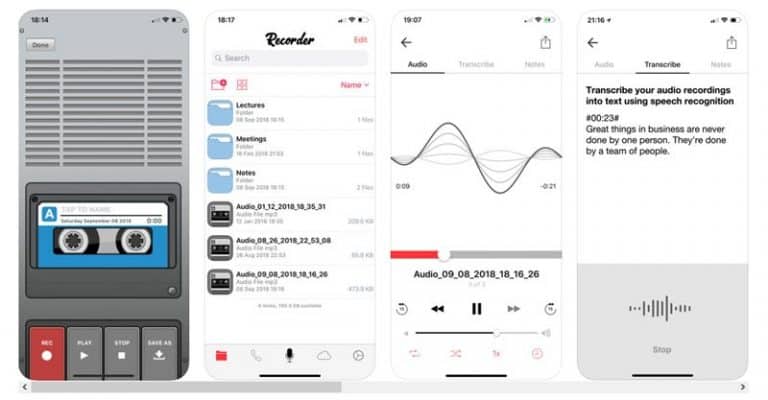 Whether you’re a backup or lead singer, there’s a good chance you play an important role in the band or bands you perform with. And, that typically means you need to spend plenty of time practicing and plenty of time resting your voice. Taking care of your vocal cords is essential to your success. With… 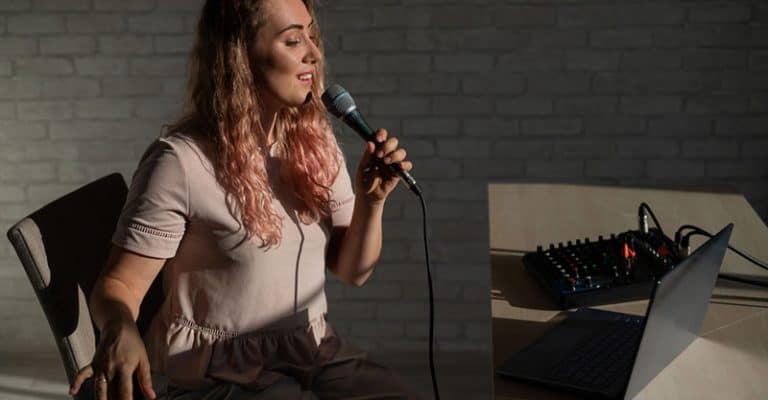 Improving your singing voice is a lifelong endeavor, but that does not mean you can’t make progress right now. In fact, with these singing tips, you should be able to improve your singing voice in just a week. If you keep at it for a month or more, you will make vast improvements. Here is…

If you’re a beginner singer and want to know how to sing in tune, you’re in the right place. Today we’re going to look at some very important singing techniques that will help get your voice more naturally in tune. We’ll also look at why it’s important to sing in pitch. As a quick note,… 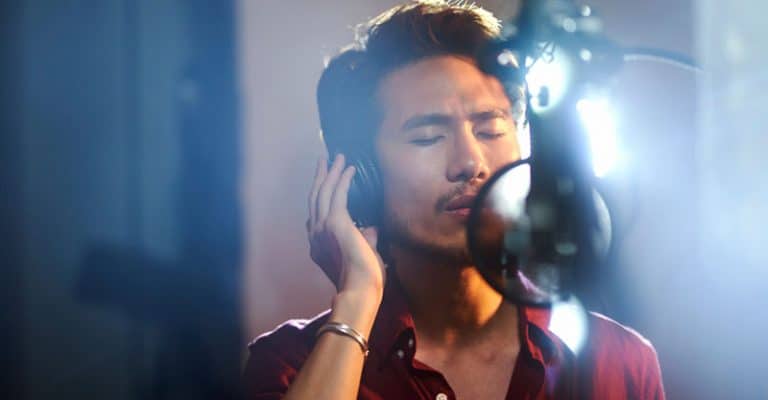 Professional singers make remembering lyrics look easy, but anyone who has tried to quickly learn a set of music knows it can be quite a task. It’s always nerve wracking to get up in front of a crowd and sing a bunch of words you’ve only just learned. In this guide, we’re going to teach… 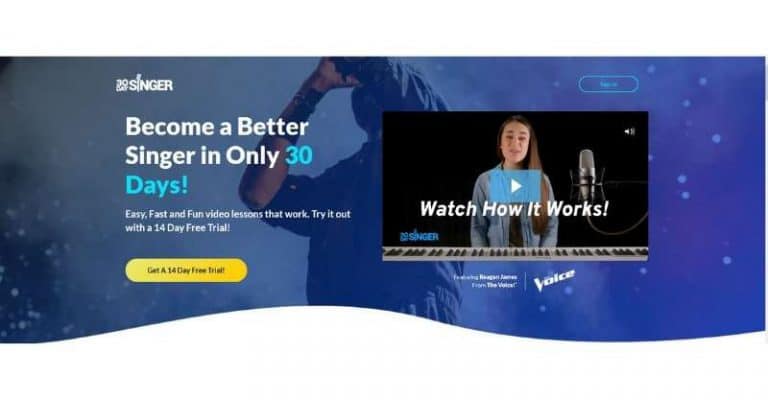 A Google search for online singing lessons often brings 30 Day Singer to the top of the page. This platform provides students with hundreds of video lessons aimed at singers of all levels. However, there are many other effective learning options with different instructors – and even different methods of education. See below for a…