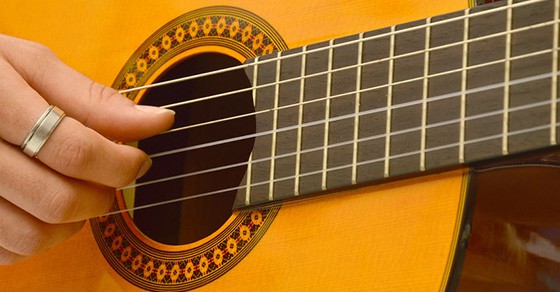 Something a colleague of mine said has stuck with me over the years:

Chords are frozen arpeggios, and arpeggios are melted chords.

I can't remember exactly who it was that shared that with me, but I am thankful for that description, because it's exactly how I explain arpeggios to my students today.

And – just in case – if you don't know what chords are yet, I would start there. This lesson will be much easier to process once you've learned how chords work.

But I digress. I know that the previous definition isn't sufficient in helping you understand what arpeggios are. So let's start from the top. Here's an easy to understand overview of arpeggios for beginners.

How Many Notes Are In A Chord? 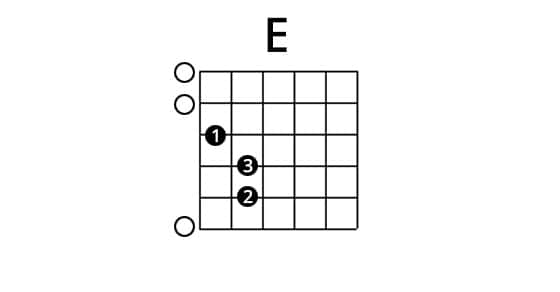 Do you recognize that chord? It's an everyday ordinary E major chord (also known simply as E).

What you may not know is that every major and minor chord is made up of three notes (there are some chords, like dominant sevenths that feature more than three notes – but that's another lesson for another time).

Well, you aren't wrong, but that's not the entire story. These are the exact notes, from the sixth string to the first string, that are sounding when you strum an E chord: E, B, E, G#, B, E.

So, you can see that there are only three unique notes within the chord, and they are: E, G#, and B.

In other words, to make an E major chord, you only need these three notes. You don't need the extra Es and Bs in there if your only goal is to make an E chord.

What Is The Significance Of These Three Notes?

If I were to explain the exact theory behind how a chord is made, we could be here all day. But I will say this: a three-note chord – like E – can always be boiled down to something called a triad.

When you play E, G# and B together, you have the core elements necessary to make a triad. Don't worry, a triad is still a chord, it's just a particular type of a chord that only contains three notes. 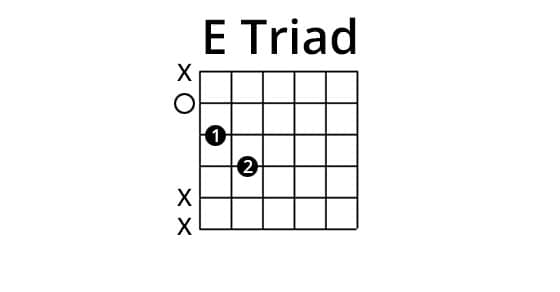 When you play these notes out of order (let's say G#, B, and E), you have what's called an inversion. Since there are only 12 notes in the 12-tone western scale, these “inversions” exist all along the fretboard.

But like I said before, all major and minor chords only have three different notes in them. The basic open chord shapes just happen to have repeat notes (at different octaves) in them.

When you play these notes, one at a time, while holding an E chord shape, you are, in effect, arpeggiating. Now we're getting somewhere.

This isn't exactly the same as an arpeggio, but we're getting closer.

So What Is An Arpeggio? 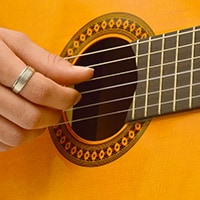 Remember what was said earlier about inversions and arepggiating? Now I'm going to explain these in a little more detail.

It isn't absolutely essential to know what these are, so if you aren't totally following along, don't worry. But I would be lying if I said it wasn't helpful to have a basic understanding of these concepts.

The significance of inversions is this. We talked about how the same three notes that make up an E chord – E, G#, and B, if you remember – are at various locations across the fretboard. Take a look at this diagram:

And arpeggiating, if you remember, is a technique where you pick one note of a chord at a time.

So if you were to play E, then G#, and then B, you would have an E arpeggio. The idea is to pick these notes independently instead of holding a chord and then picking these specific notes within the chord.

So, an arpeggio, in essence, is just a three-tone scale. Most scales, like the major scale or minor scale, have seven tones, but an arpeggio is just an outline of a chord, so it contains fewer notes.

Why Is This Important?

You are now versed in what arpeggios are. But I will add a few more thoughts here for those that want to go deeper.

The act of picking notes out of a chord is a technique often seen among rhythm guitarists. It could be for a gentle ballad or for a little atmosphere. You won't hear a lot of arpeggiated chords in faster, more upbeat songs, but there are always exceptions.

A lot of guitarists tend to “stay inside the box”, meaning they'll learn one pentatonic scale pattern and apply it to every solo and every fill they play.

And you can totally get away with that. But more advanced guitarists tend to be focused on the exact chords that are being played in the song, and can immediately identify “chord tones” and play those at exactly the right time.

The result? Soloing that is more melodic, tasteful, and personal. Music is about creative expression, and the more tools on your belt, the more you have to work with when your moment in the spotlight arrives.

Another technique that can be cool – but has fast become overused – is sweeping. For an example of over-the-top swept arpeggio pyrotechnics, check out any song by Yngwie Malmsteen.

Hopefully what I talked about here didn't go over your head.

When it comes right down to it, an arpeggio is just a chord played one note at a time. That's it! There are a variety of different ways of embellishing arpeggios, such as with sweep picking, but that's a whole other topic.

So if your only takeaway from this lesson is that arpeggios are chords played one note at a time, you're going away with more than you came in with. 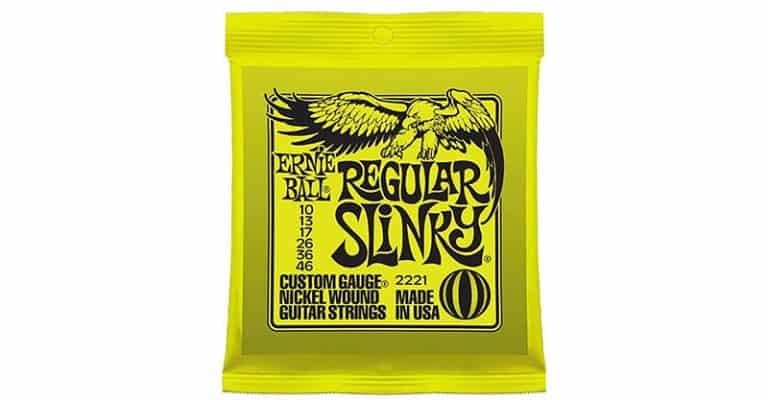 So, you’ve got a new Telecaster and you’re not sure what type of strings to put on it? Or, maybe your beloved guitar could use a bit of a change in the string department? Whatever the case may be, you’ve come to the right place. The following is a list of some of the best…

You may have noticed how some of the greats – past or present – aren’t just tasteful, fast, or technical guitar players. Many of them are really flexible too! Some of my students like to point out how small and stubby their fingers are, but if you know anything about working out, you know that… 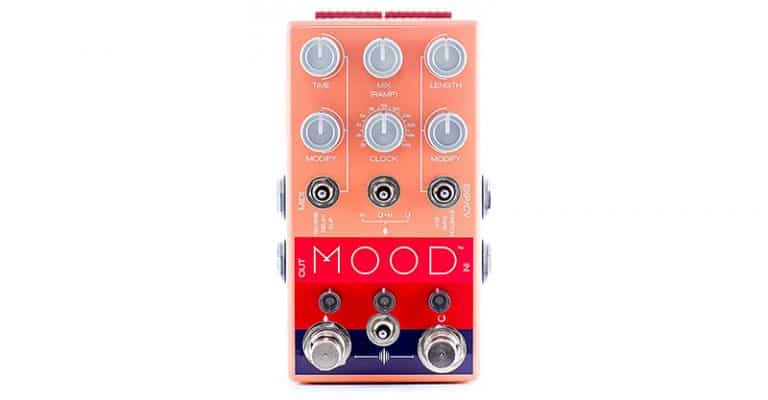 Are you drawn to the sound of ambient guitar playing? You’re definitely not alone, but it can be a little confusing to get into. There are so many pedals available today that it can be difficult to know what’s what. No worries, this list of ambient guitar pedals contains some of the best you can…

Lead guitar looks impressive, which is one of the reasons why a lot of students also tend to be intimidated by it. But basic lead guitar – and I do mean basic – is much easier to learn than basic rhythm guitar. Surprised? After all, with lead guitar, you only have to play one note… 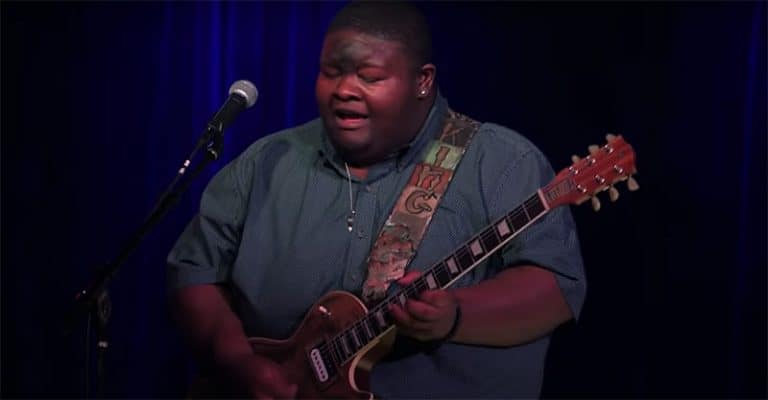 Have you ever wondered about where today’s guitarists have gotten much of their influence? Typically, each decade’s music becomes a part of the common nomenclature of the current decade.  While much music is derivative, black musicians have played an incredibly important role in the pioneering of music genres. The following guitarists are some of the… 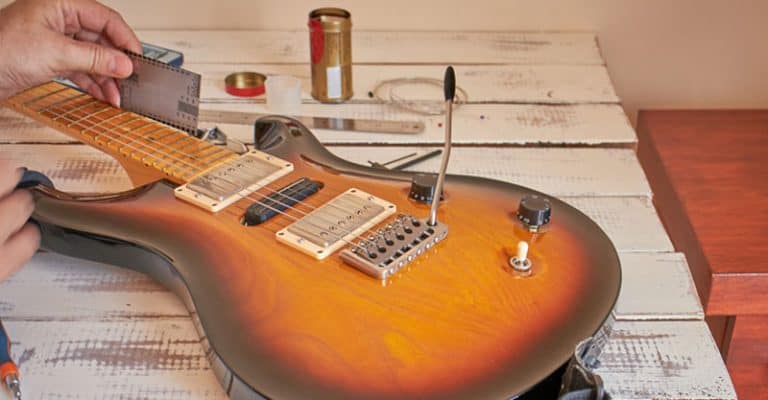