You are here: Home / Music Business / Setting S.M.A.R.T. Goals for Your Music Career

Success is knowing you did something worth while.
Ronise Lukasiewicz. 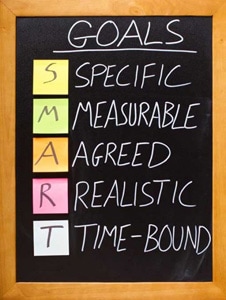 So now you know that it’s possible to make money from your music career, and you also know you should take things one step at a time. But before you go out and start trying to earn money from your career, it’s important you take time to set goals for what you want to achieve.

While it’s easy to say, “I want to get a lot more fans” you have to ask yourself, how is saying this actually going to help you achieve your goal? It’s a non-specific “want,” rather then a well thought out business plan.

Studies have shown you’re more likely to achieve your goal if you have a clear visual understanding of what you want to achieve in life. This is where S.M.A.R.T. aim and objectives come into place.

S.M.A.R.T. is a tool we can use to better map out what we want to achieve. It stands for Specific, Measurable, Achievable, Realistic, Timed. That means all of the aims we have for our music career should be specific, we should be able to measure them, they should be achievable, they should be realistic, and we should know how long it’ll take us to achieve this aim. These aims should be written down, so we have a goal to look at and refer back to when we feel a bit lost as to what we’re doing.

Make sense? Hopefully it does, but if not, here’s an example.

Let’s take the above aim of:

This is a very vague aim to have, as it doesn’t give us any idea of how we’re going to achieve this goal of ours. By applying the S.M.A.R.T. formula to it, we can edit it to be an aim we can refer back to and get a better idea of how we’re currently doing. This will make it easier to achieve it.

So first off, let’s make our goal Specific. We want to specifically state what we need to do to achieve this goal. There’s no point saying we want more fans if we don’t know how we’re going to go about getting those extra fans, is there? It won’t make it any clearer how we’re going to achieve that goal; it’s sort of like saying, ” I want to be rich.” The majority of people who say that have no further ideas in their plans to get rich, and therefore never take any real steps to achieving that goal.

OK, so how Specifically are we going to go about getting more fans? Let’s say you have the means to create home made videos of you performing cover songs, and have a YouTube channel via which you can showcase your material to the world. By uploading your videos and encouraging people to like your Facebook page if they enjoy your song, you will get a percentage of people taking you up on this offer. Tell them they will find out about your new videos there first, and that they will also get exclusive bonus videos not shown publicly on YouTube. This will encourage a larger percentage of your video viewers to Like your Facebook page.

You could also get those new Facebook fans via gigging or other means, but for this example we’ll stick to the cover songs strategy. So we can change our aim so it looks like this:

Now every time we look at this aim, we know what we should be doing to achieve it. If you want to get more fans by doing other things, you can make other aims to go alongside this one.

Next, we need to make this aim Measurable. After all, how will we know if we’ve achieved our aim if we haven’t got a clear goal to aim for? What does “a lot more” really mean? Is that 20 new followers? 100? Or 1000?

In this example we’re using Facebook followers as our measuring point, although you can aim to get more mailing list subscribers, more gigs, make more money, etc. Sticking to the Facebook example though, I will change the aim to:

Now this is something we can actually measure, and can look at to see how close we are to achieving our aim. We don’t want to stop there, though, as there’s more we can apply to make our aim even more useful to us.

Next, we want to make sure our aim is Achievable. Well, is it? In this case, it is. Gaining 100 Facebook subscribers is something most people can do if they offer something of value or interest. It will take some people longer then others, but it is something you can achieve. It is also Realistic, which covers the next section in our S.M.A.R.T. formula as well.

If you was to say you want to increase your Facebook subscriber numbers by 10,000, though, while it may be humanly achievable, it’s not really a Realistic aim for the average independent musician. Therefore, this number would have to be cut back to one that’s a lot more realistic.

Don’t try to cheat with the numbers; they’re only there to help you take manageable steps to advancing you music career. You don’t want to aim for the end goal straight away; this will lead to you not hitting your targets soon enough and only leave a feeling of disappointment and failure. This often leads to people quitting music and believing it doesn’t work, so initially aim for something that is Realistic and Achievable.

We don’t have to change our above version of the aim in this case (“I want to increase my Facebook subscriber count by 100 followers by doing cover versions on YouTube”), as it is both Achievable and Realistic. That said, if you’ve made an aim and it isn’t achievable or realistic, change it accordingly so it is.

The last stage is to make sure it’s Timed. By this, I mean it’s something that we can time, and has an end date.

There’s no point having an aim that will go on forever; if you don’t achieve that aim, you need to know when it’s time to say it’s not working and modify it to something more realistic. This is why we will give it a time limit.

For this example, I think 4 months is a reasonable amount of time to get 100 new Facebook fans. You may want to aim to do it quicker if you already have a starting fan base that you can transfer over to Facebook, but for this example let’s stick to 4 months. So, let’s edit our aim to reflect this:

“I want to increase my Facebook subscriber count by 100 followers by doing cover versions on YouTube. I will do this within the next 4 month by [insert date].”

And that’s it, our S.M.A.R.T. aim is complete! Instead of just saying you want to achieve something, you now know how you’re going to go about achieving it, when you should have it done by, you can measure how far along you are with your aim, and you know that it’s an aim you can realistically achieve.

When you set your music career aims, do them in manageable steps. Don’t say you want to earn a million dollars and be rich; take things in baby steps and achieve one goal at a time. So initially aim to break even, and create a S.M.A.R.T. aim for how you’re going to achieve that. Once you’re at a break even level, next aim to make, say, $100 a month from your music career, and do a S.M.A.R.T. aim for how you will complete this aim. As you achieve it, keep building things up and work toward new aims in manageable and realistic steps.

So, you’ve mapped out your S.M.A.R.T. goals, and you’ve been following the plan to achieve your written down goal. But at some stage of following this plan, it becomes apparent that you aren’t going to hit your target. What should you do?

Well the thing about these goals, is you can make them flexible. You will of course want to try and make your goal as realistic as possible when you’re drawing up your plans, but sometimes it’s easy to underestimate how difficult something really is.

If this happens, you should go back to your original aim, and edit it as needed. By now, you should be more clued up as to what a more realistic aim is to have in terms of this part of your music career. Let’s say for example 100 new Facebook follows was too much to aim for. Why not reduce that number to 50 if you feel that’s a goal you really can reach?

On the other hand if you hit 100 fans well before you time limit is up, why not set a new aim for more Facebook fans in a new time range? Only if you feel it’ll benefit your music career of course, you may instead decide to increase interaction with your current followers before you actively try and get any more.

At the end of each S.M.A.R.T. aim, there are a couple of things you should do. Firstly, you should analyze how things went. What worked and what didn’t? Is this something you can scale up to get even better results? Is it worth aiming for this goal again?

Once you decide this, you should make a new aim to keep you busy in your newly free time. Alternatively, you can use that time to work more on another aim you have going on.

After a while, you will start to see what the best place to put your efforts is. You will find that by doing some things, you will be gaining more fans (or making more money) quicker than when you do other things. It’s in these areas that you should start to put more time, as they will give you more rewards for your time. Work smart, AND hard.