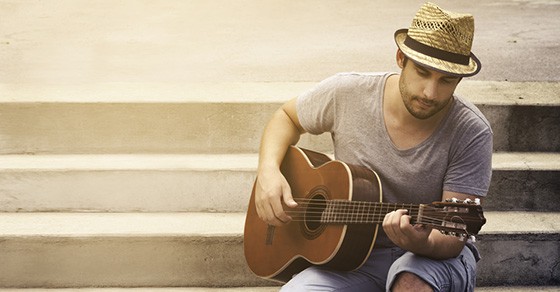 Sweep picking is cool and flashy, and players like Yngwie Malmsteen make it look appear effortless. As it so happens, it is considered advanced technique by many.

But if you’re going to start, you might as well start now. There aren’t that many advantages to waiting to learn how to sweep.

It’s an aspect of playing in which learning other theory and techniques might not complement or help you in any way. It’s just a different way of playing the guitar.

So, here are some tips on how to practice sweep picking for beginner guitarists.

Commit To 100 Days Of Sweep Picking

There are a several experiments online showing how different guitarists have been able to get a better handle on sweep picking within a 100-day time frame. Have a look at this video:

This doesn’t mean there’s something magical about the number of days you practice, but it does encourage you to think long-term rather than short-term.

And, if you don’t think long-term with sweep picking, you’re going to get frustrated and give up. You need to give yourself a fair chance and put in the hours to make it happen.

So, why not take the 100-day challenge? What do you have to lose? Set aside some time every single day to work on your sweep picking technique.

Raking is the precursor to sweeping. It’s much easier to do, because you don’t necessarily have to fret a specific set of notes to perform a rake (i.e. like an arpeggio). You can simply add a bit of a percussive flare to a lick or a solo.

Raking requires a bit of muting, and that’s probably the hardest thing about it.

Let’s say that your target note is the fifth fret on the third string (C). Raking is typically a downward motion, so you would mute a string (or several strings) above the target string (in this case the third string), and then “rake” (drag the pick across the strings) the two strings with your picking hand.

The muting is done with your fretting hand (for example, if you were fretting the C with your index finger, you’d mute strings above it with your ring finger), picking hand (palm muting), or a combination thereof.

You can also mute with your index finger by positioning such that it’s touching the string above the note you’re fretting.

Raking usually involves three or more strings. So, for the following example, I’ve provided both the two-string and three string versions of the same exercise.

If you’re finding three strings too hard, just work on the two-string version for a while, and then work your way up to more strings.

Again, raking isn’t hard to do, but if you need a visual, here’s a video that shows you how to do it:

Sweep picking and arpeggios tend to go hand in hand. But we’re not going to get into full-on sweeping just yet. First, let’s work on some three-string arpeggios.

I wouldn’t recommend getting into six-string arpeggios off the bat, because sweeping across all six strings is one of the hardest things to do.

As you begin to feel comfortable with two or three strings, you can start adding more.

Here are a few three string arpeggios in the key of C. We’re not going to complete the entire scale, as playing higher up on the fretboard could be kind of awkward depending on the guitar.

There are two ways to practice this exercise.

The first is to hold down the chord shapes and pick the notes as you normally would.

The second is to use one finger at a time – placing them on the fretboard only as they are needed, and then picking the notes individually.

I would suggest practicing it both ways, but the second way is the most important, because this is almost exactly what you must do with sweep picking.

There are other three-string arpeggio shapes, so don’t limit yourself to the ones illustrated here alone. Use the above exercise as a starting point.

If you’re starting to get a hang of rakes and three string arpeggios, then you’re ready to try some basic sweeping.

We’re going to be working on two strings for now, but in some ways, it can be harder to sweep just two strings as opposed to three or four.

This is because it requires more control. But it’s the same control you’re going to need to develop if you want to get good at sweeping.

Similarly, when you’re sweeping in an upwards direction, your pick should be pointed slightly downwards. You’ll need to make this adjustment with your wrist.

The goal is to work on this until it’s one smooth and complete motion:

Again, because this is a precision exercise, it will take time to master, even though it’s just two strings. Be patient – you’ll need to repeat this many times to get it right. Play it slowly.

Now, we’ll try a three-string sweeping exercise. You might not be ready for this, and that’s okay. We’re going be sweeping an Am arpeggio.

Stevie T has a great tutorial on sweep picking, and if you want to work on more three-string sweeping, I would suggest having a look.

He utilizes pull-offs in this video, which is something we haven’t worked on yet (I’ll be talking more about this a little later).

Still, if you take his exercises at a slow enough rate, they shouldn’t cause you too much trouble. Here’s the video:

If I wasn’t clear on this point already, this is important to understand:

Now that we’ve graduated from two- and three-string exercises, we’re ready to give four-string swept arpeggios a try.

I’ve gone relatively easy on you to this point but now it’s time to separate the children from the adults.

We’re going to work on sweeping various arpeggios up and down so you can get a better feel for them. Let’s do this!

I’ve left out the confusing “sweep up” and “sweep down” notations here, but the intent should be clear.

Your goal is to effectively sweep up and down various arpeggio shapes, in this case, in the key of A minor.

Again, it can take time to master something like this, especially if you aren’t comfortable with sweep picking already. So, take your time. Work on this bit by bit, piece by piece. Start slowly.

Five- to six-string sweeping looks the flashiest of all. And, unsurprisingly, it’s also the hardest.

So far, we haven’t combined hammer-ons and pull-offs with sweeping (unless you tried playing along with Stevie T’s tutorial) but now’s the time to get into it.

Sometimes, there are multiple notes on the same string that belong to the chord (arpeggio), and to get at them, and to keep our phrasing legato, we need to incorporate hammer-ons and pull-offs.

Now, this isn’t a necessity by any means. But it’s a good technique to learn.

Arpeggios are melted chords and chords are frozen arpeggios. Because of that, when you’re sweep picking, you’re basically outlining chords one note at a time (but there’s no rules saying you can’t incorporate other notes from the scale).

The faster you play them, the closer they resemble chords.

Anyway, we’re going to learn how to sweep some major and minor chords in the following example. Have a look:

You aren’t required to follow the rhythm too closely. I adjusted it so that every arpeggio would fit nicely into a bar of music.

As you can see, hammer-ons and pull-offs usually occur at the “top” or the “bottom” of the arpeggio. This isn’t always how it works, but with simple major and minor arpeggios like the ones shown here, this is typical.

In this example, there are basically only two arpeggio shapes being moved up and down the neck. This is on purpose so that you get a good sense of how to play each.

Again, take your time and start at a slow to moderate tempo. Work on everything bit by bit, piece by piece.

Getting to this point (of being able to sweep six-string arpeggios) is going to take some time. So, don’t feel obligated to progress rapidly from sweeping two strings to sweeping six strings. It probably won’t happen that way!

More than likely, you’ll start with some simple two- and three-string examples and keep working on them for months or even years (depending on how much you practice) before you graduate to four strings and beyond.

This isn’t to suggest more strings makes it immeasurably harder.

But just as bending is easier on some strings, so it is with sweeping. I find it so much easier to sweep on certain string groups over others.

Sweeping six strings requires finesse and muscle memory. How long it takes to develop the necessary muscle memory is individual (especially if you want to get lightning fast at swept arpeggios), so don’t get frustrated if you don’t get it right away.

Some people must practice more than others. It’s just how it is.

Now it’s time to try some basic six-string sweeping. I’ve included a few arpeggios, so you have plenty to try.

Give this a go: 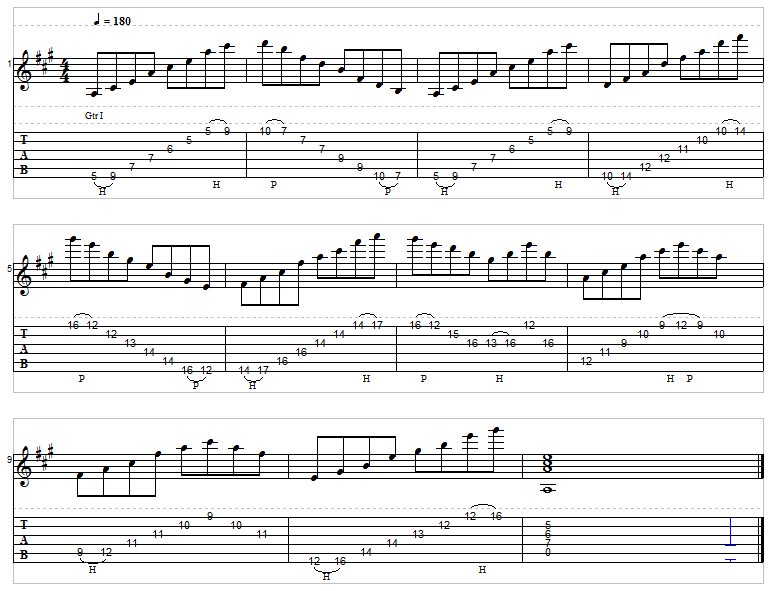 In this exercise, in addition to six-string arpeggios, you will also notice some three-string and five-string parts.

The trickiest part is the seventh bar where you play an E7 arpeggio. Note that the last two notes in this bar do not need to be swept.

It’s kind of “slippery” all around, especially if you’ve never played something like this before. But it is possible to play, even if takes a long time to be able to play it comfortably and perfectly. 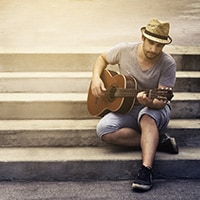 If you feel good about these, your next step is to learn more arpeggios.

Keep in mind that there are as many arpeggios as there are chords.

So, whether it’s dom7, m7, maj7, sus2, dim, aug or otherwise, guaranteed there is a corresponding arpeggio that you can sweep your way through!

For some amazing sweeping, check out players like Yngwie Malmsteen, Jason Becker, Jeff Loomis, Michael Angelo Batio and others, and try to learn their licks.

You can also search for additional exercises online. I assure you there are many! But before you go there, be sure to master the above.

At times, learning to sweep will feel like banging your head against the wall. You’ll make some progress, and then you’ll feel like you’re getting worse instead of better. It’s two steps forward, one step back.

That’s why I would suggest playing long ball with it. Prepare to practice every day for 100 days or more, monitoring your progress as you go. If you stick with it, you will improve and eventually master the technique.

As you begin to get a hang of two string and three string sweeping, slowly add in the fourth, fifth, and six strings. Learn all your arpeggio patterns, too.