You are here: Home / Guitar / How To Restring An Electric Guitar Properly 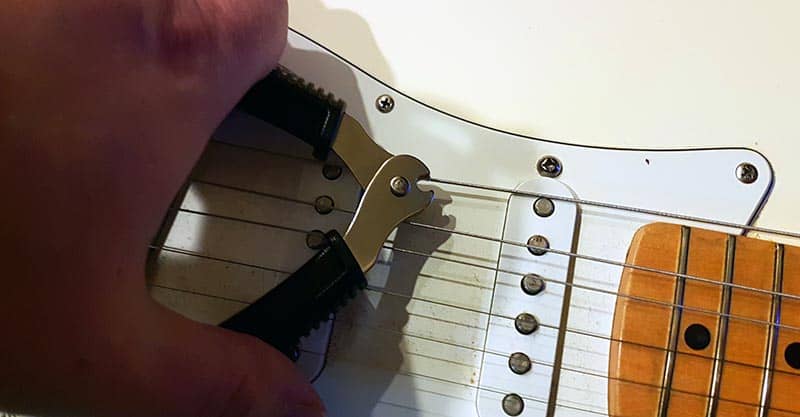 Every guitarist finds the need to resting their guitar occasionally.

Even pros with guitar techs sometimes need to restring their own guitars, especially if they aren’t on tour or recording an album.

As a beginner, this is a useful skill as well. As you begin playing more and more guitar, the need to put new strings on your axe will increase, because wear and tear will deaden the sound of the strings over time, and you will occasionally break a few strings too.

So, here’s how to restring an electric guitar properly.

The exact process for restringing your guitar will vary based on the type of guitar you have. Electric guitars aren’t all created equal and even come with different bridges.

If you do not have a Stratocaster style guitar with a standard bridge, then you may need to find additional tutorials.

Tools You’ll Need To Get The Job Done

Although you don’t need any special tools to restring your electric guitar (it’s a different story with most acoustic guitars), it can make the process a lot easier and more efficient.

Here are the tools I’m using in this guide:

From a great amount of trial and error as well as experience, I can say that you don’t want to remove all strings simultaneously. If you do, you might end up with some bridge-related issues.

So, let’s start with just one string, namely the sixth string. This is the thickest string on your guitar and is also called the E string.

First, you must loosen this string. Turn the tuning peg in a clockwise direction. You don’t need to remove the string entirely, although you can.

The most efficient way to loosen the string quickly is with your string winder (turn in a clockwise direction). 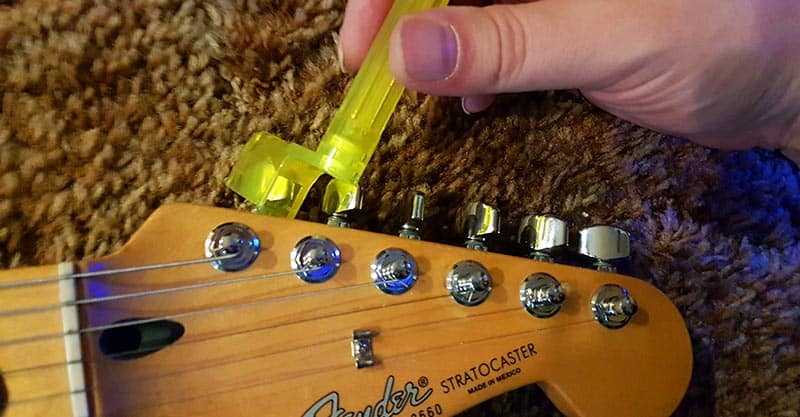 Once loosened, use your string cutters to cut the string, somewhere close to the pickups.

At the headstock, you will need to pull out one half of the string. 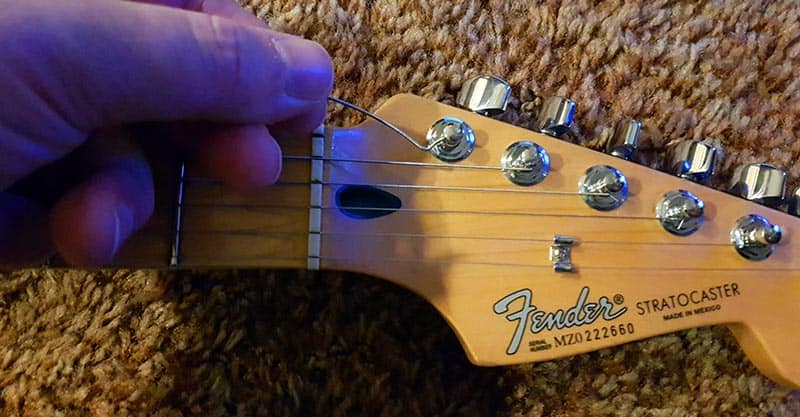 With the other half, you’ll need to feed it through the back of the bridge to remove it. 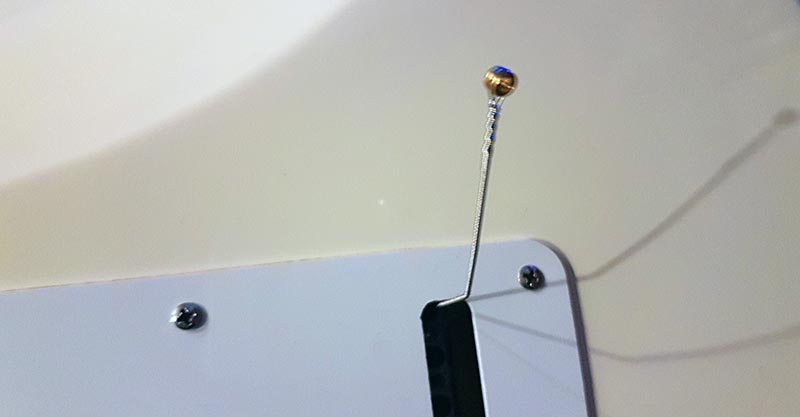 Now that you’ve successfully removed the old string, we’re ready to move onto the next step.

First, take the fresh string out of the envelope and unravel it. 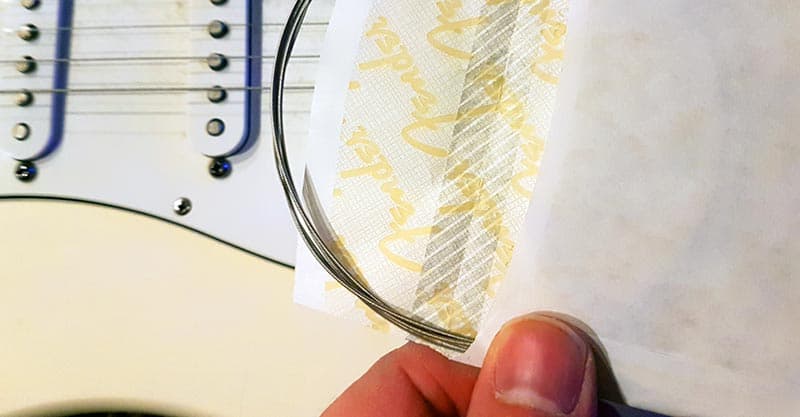 You’ll see that the string has a pin on one end (since I’m using Fender Super Bullets, this one has a bullet end). 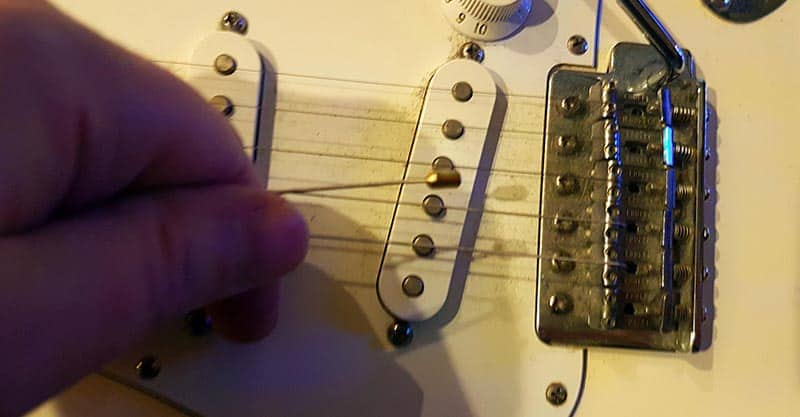 If you hadn’t figured it out already, this is the end that needs to go into the bridge. But you can’t feed it through the top of the bridge (it won’t fit). 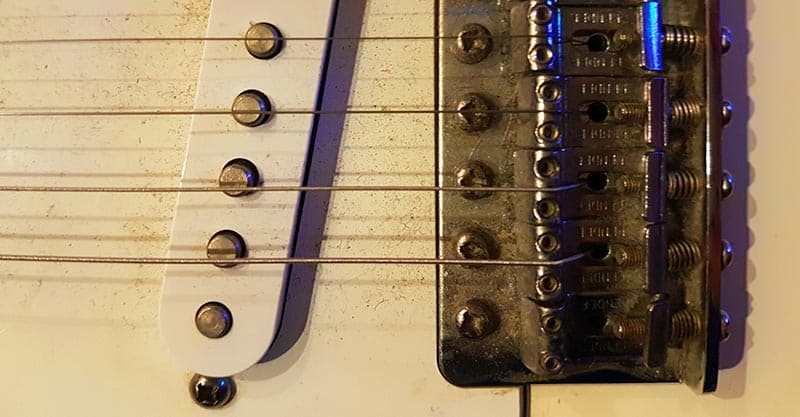 The string needs to come up from the back. So, take the end without the pin and feed it through (feel free to feed the entire length of the string through). 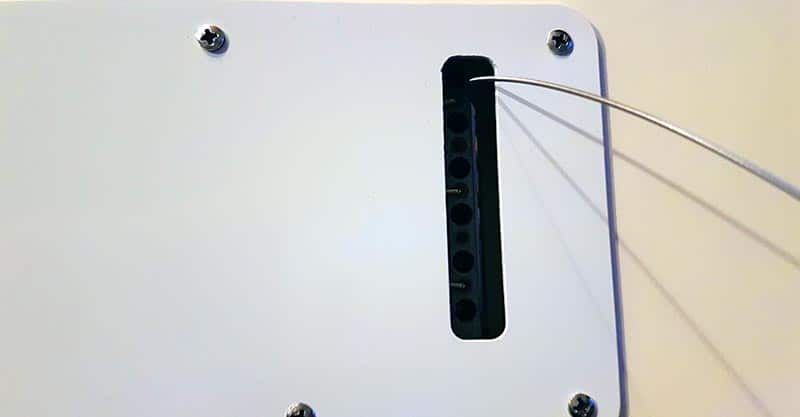 If you did everything correctly, the string should now be resting on the front of the guitar. 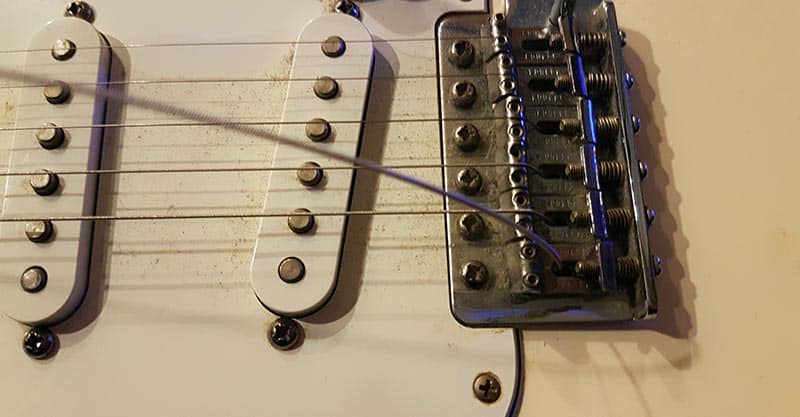 Feed the string thorough the post. Allow for a certain amount of slack so that the string can wind around the post a few times (i.e. don’t pull the string all the way through). 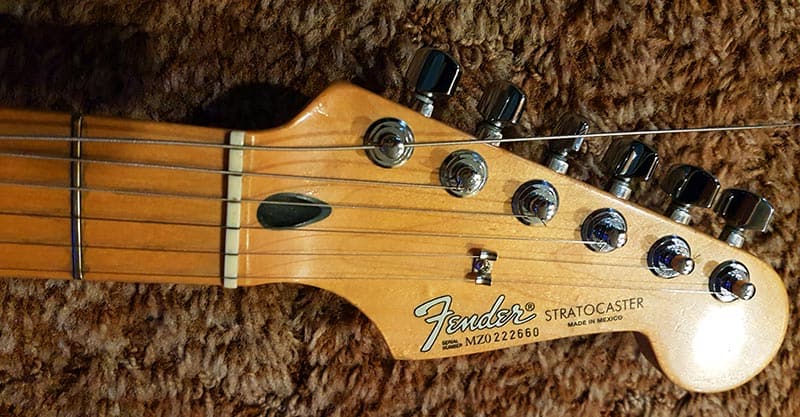 Now you’re ready to tighten the string. Use a string winder and turn in a counterclockwise direction (careful not to overtighten).

Turn on your tuner and play your string. Your tuner should tell you approximately where you are (in this case, I can see I’m a little flat, because the string is tuned to D#2). 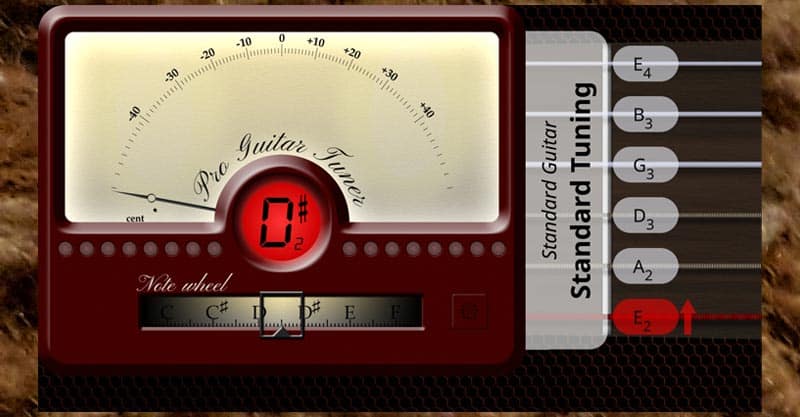 There’s a good chance your string isn’t quite in the range it needs to be yet. We need to get the sixth string to E.

Your string is probably a tad loose at this point, so keep tightening and keep an eye on the tuner as you do so (also, keep playing the string or your tuner will not register the note).

Once you’ve reached E, you are basically in tune. But I recommend stretching the string and tuning it up multiple times, because it’s probably not going to hold tune just yet.

You can stretch out the string by yanking on it across the length of the string, as shown here: 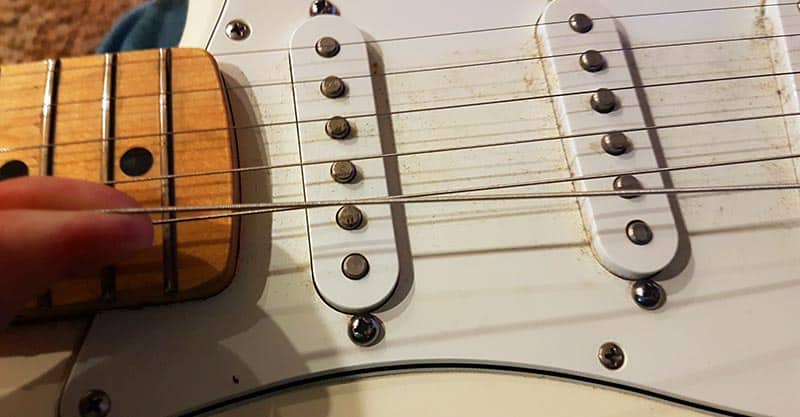 Step #4 – Repeat The Process For All Other Strings 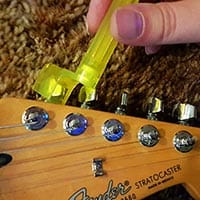 There are six strings total on a guitar.

The process, however, is the same as the sixth string.

So, loosen and remove the string, put the new string on and tune up the string. Also refer to the explanation laid out above.

How To Restring An Electric Guitar Properly, Final Thoughts

Replacing your strings shouldn’t cause you any trouble once you get used to it. Some guitarists and guitar techs can do all six strings incredibly quickly. You’d be surprised!

While stringing up a guitar is a mundane task, it can also be a meditative experience. And, it can even give you a feeling of excitement, especially if you get in the habit of restringing your guitar before a recording session or gig.

So, if you can’t figure it out right away, don’t worry. You will. Be patient and don’t get frustrated.