You are here: Home / Building A Team / How To Use Odesk For Musicians Part 2

Welcome back to the second part of this guide on using Odesk for musicians. In the first part we looked at what Odesk is (the sister site to Elance, a similar team building website), how it can be useful for you as a musician, how much you should pay any freelancers you find and more. In this part we’ll look further at the hiring process, how to interview people, and how to get your music related work done. I’ll also touch on building a team on Odesk, as well as other important tips not often talked about.

Interviewing Candidates, Do They Fit Into Your Music Team?

After you’ve posted your job, if it’s appealing to those on the marketplace, you’ll start getting people applying for it. Sometimes this could take a couple of hours, sometimes it could take days if what they need to do to apply is that bit more complex (for example, recording some audio for you). Once you do get applications however it’s time to start interviewing.

You don’t want to hire the first person who says they can do the job. Instead, you’ll need to check that they’re right for you.

Have a look at other similar work they’ve done. Have they got a style you like? Have they worked on any project you think west well? Have they done anything similar before?

Look into all of these things via their profiles, and if you can’t find something you want to know, message and ask them. Seeing if you communicate well with them is also important.

You want to be sure you’re hiring the right person for you, so go back and forth with them as many times as you need till you’re comfortable.

Tip: Be sure to look at each person’s profile as it will tell you how it’s gone for other people who have worked with them. If you see a freelancer with lots of bad reviews, stay away from hiring this person.

Hiring Someone To Help With Your Music

Once you’ve found the right person for the job, the next step is to hire them. By now you’ll have a better idea of what they can do, but you should still hire them for a small ‘test job’ first. So get them to do a smaller job (less work) for less money and see how they do. That way if it goes well you can after hire them for the full job. But if they aren’t as good as you initially had wanted, you won’t have lost that much money.

You can hire as many people as you want, but don’t rush this. If it doesn’t feel right, don’t go with that person.

Reviewing Their Work And Paying Freelancers 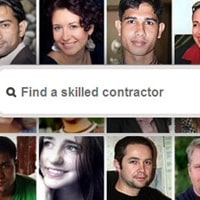 After you’ve hired someone they should get to work on your job. You should give them a time limit before hand; a completion date. Hopefully they’ll get you the work by that date, but with some workers you’ll have to chase them up around the deadline.

If you’ve done a fixed price contract, once the work is submitted you can look over it and see if it’s done correctly. If so you can click to pay them, or if not you can request revisions so it gets done right.

If you’re hiring via hourly pay, work should be submitted as and when it’s done. You will get screen shots every 10 or so minutes while they’re working, which you can access at any time via your dashboard.

And that’s it, your work it complete. 🙂

Building Up Your Odesk Team

Even those ‘one off’ tasks you hire people for aren’t really one off. Let’s say you get someone to design you a single cover. That’s fine, you won’t need another one for a while. But if you’re in music for the long term, chances are you’re going to need to hire someone again for the same thing in future.

It’s because of this that you should keep a good relationship going with any good freelancers you come across. If there’s someone you can keep going back to for the same type of job in future, it’ll save you time from interviewing and hiring for the job again. You’ll have someone who you know is reliable and can do the job in the way you like.

When communicating with freelancers and you find one you like, let them know you’d like to work with them on an ongoing basis. If you’ve got more work for them right away, give it to them. If not, let them know you’ll be in contact when you do.

Always be polite, as if you’re rude or difficult to work with, people will stop working with you. They’ll also leave you bad reviews on Odesk, making others be less likely to want to work with you. We’re all human, so bare that in mind when communicating with freelancers.

Eventually you’ll want a team of people who can help you in various aspects of your music career, all at a cost lower than you’d pay if you were to use a company to get these jobs done.

And that’s how to use Odesk if you’re a musician. I can’t stress enough how important it is to get help in your music career. No matter how talented you are you can’t do everything by yourself. There simply aren’t enough hours in the day.

You could hire someone to market your music full time (if you had the money) and still need more marketing done. So if that’s the case, you definitely haven’t got the time to make music, market your music, communicate with fans, design your artwork and more.

So, have you ever used Odesk before? Or do you want to try? Let us know in the comments.