You are here: Home / Getting And Performing Gigs / How To Make A Stage Plot Using These Tools, And What A Stage Plot Even Is 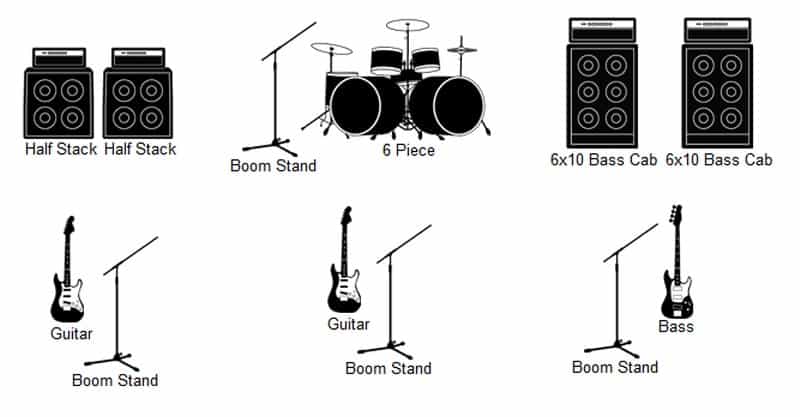 You know you’re starting to get a different quality of gig when venues and event organizers start asking for stage plots.

This is the moment bands and artists tend to get excited and overwhelmed by at the same time.

“Stage plot? What’s that? Why do we need it? Do we even have time to put that together?”

I know it can seem like too much, but if you’re planning to play festivals, big stages and other events, you’re going to need one. There’s a chance you won’t even land the gig without one.

May as well take care of it now instead of putting it off until later.

So, let’s take a closer look at stage plots.

What Is A Stage Plot? 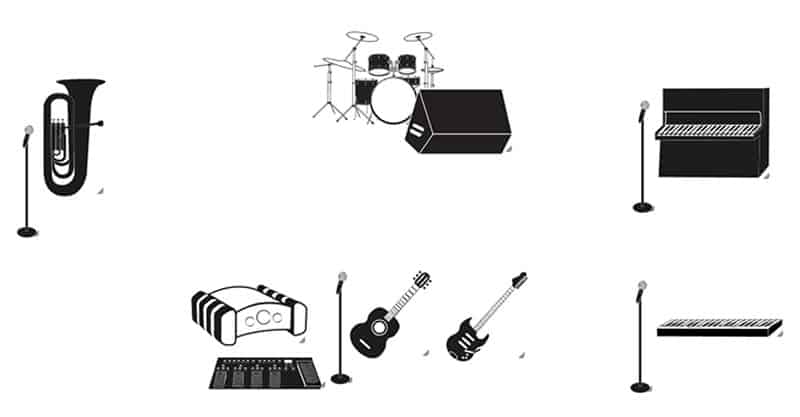 A stage plot is basically just a graphical diagram (sometimes hand drawn) showing where all your equipment goes on stage, who will be using it, what connections you’ll require (DI, XLR, 1/4” cable, etc.), where you want the monitors, and the like.

It is preferable to have stage plots that are scalable (e.g. 1/16 real size), though this isn’t always necessary.

A note of caution: If a venue or festival requires a stage plot from you then I wouldn’t suggest sending back a note saying “oh, we just need two mics and two DIs – just put them center stage”.

Organizers, for better or for worse, don’t have much time. If they ask for something, they mean business. If you don’t give them what they need, you may lose your spot on the bill.

After all, organizers need to coordinate with a variety of people, including the techs, who need to set up the equipment for the show.

It’s much easier for organizers and techs if every act already has an accurate stage plot. And, it’s a win for you, too, because it generally means you can plug and play when your set time comes.

Why Is It Needed? 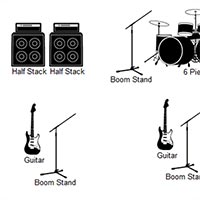 For the average coffeehouse, bar, pub or club gig, you don’t need a stage plot.

Bands and artists tend to make do with what they’ve got and often do their own setup. Some venues will have a sound guy to handle mics and the overall mics, some don’t.

I remember playing as a trio on a cramped stage in Invermere, BC.

Yes, it was too small even for three musicians with two acoustic guitars and a keytar (none of that gear takes up much space).

It’s good to follow certain conventions instead of getting innovative with the average setup.

So, the drums should be center stage, towards the back. Guitar and bass can be to the right and left of the drums. The vocalist can take center stage. And so on.

It’s not ideal for everyone, but good enough for most, and it’s exactly how most bands set up.

But for larger stages, theater gigs, festivals and the like (maybe even a Battle of the Bands style competition), you will likely be asked to provide a stage plot.

This serves a practical function as much as it does an organizational one.

So, on a larger stage, you have a lot of space to move around. Monitoring ends up being a critical component to the band’s overall success, because you need to be able to hear each other.

If your band was merely pumped through the mains, you’d have trouble hearing yourself, and you may even end up hearing reflections and echoes instead of the source.

And, as I’ve already shared, organizers want their event to go off without a hitch.

They don’t want to be responsible for – or messing around with – setting up gear at the last minute. It’s likely they have better things to do with their time.

Finally, I think there is an element of professionalism to having a stage plot, too. If you don’t have one, event organizers may not take you seriously.

If you can be counted on to provide one on short notice, organizers will find it easier to work with you, and have more confidence in booking you because they’ll get the sense you’ve done this before. 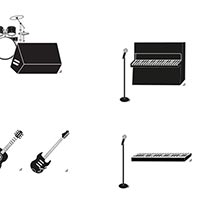 If you’re reading this now, there’s a good chance you’re in need of a stage plot and may not know where to get started.

The good news is there are apps you can use to generate your stage plot, and this will likely prove much easier than having to draw in everything by hand.

Here are some of the best stage plot tools available.

Once all the details are filled out you can print your stage plot or save it as PDF.

I don’t think it’s the perfect app by any means, but it’s convenient because it’s entirely online.

They have a large collection of colorful icons, but to get access to all of them, you will need to upgrade your account.

Stage-Plan is yet another online app that can be quite handy.

It has plenty of cool icons, but my main beef with it is that I think the interface could be a lot easier to use. It’s a little time-consuming to create an entire stage plot.

And, some of the icon sizes don’t make a lot of sense.

But if you’re in a crunch I’m sure it would still work.

There isn’t a shortage of stage plot apps out there, so here are some others worth exploring:

How To Make A Stage Plot Online, Final Thoughts

If your band has a solid lineup, that’s unlikely to change for years to come. So, you won’t necessarily have to create dozens of stage plots. One, accurate plot should serve you well.

You won’t need a stage plot for every gig but for those times when you do, you’ll be glad you know about the apps out there and how easy it can be to be up and running.