You are here: Home / Getting And Performing Gigs / 4 Tips On How To Have And Improve Stage Presence 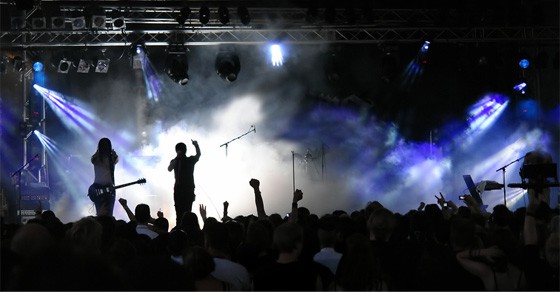 If you’re a singer or rapper, chances are you’re going to want to start gigging at some point if you’re not already. Performing gigs are a great way to increase the amount of money you make form your music career, as well as a great way to build loyalty among your fans.

While musicians often put a lot of work into their vocal performance when it comes to preparing for a gig, one thing I see many spending less time on is improving their stage presence. In fact, to many, it doesn’t even occur that they should be working on this side of things. You just go up on stage and perform your music right?

The way you move around the stage and interact with fans is all important. It can literally be the difference between an average show and one of the best performances your audience has seen all year! That’s not an exaggeration.

So baring in mind how important getting this right is, here are some tips on how to improve stage presence as a musician. Read on and learn to command the stage right.

Learn From The Stage Presence Others Have

One of the biggest tips I can give you when it comes to improving your stage presence, is learn from others! This is the easiest way to see what does and doesn’t work when it comes to stage movement.

Are there certain movements and movement styles many of the singers, rappers or bands in your genre follow? Are there ones which work well which you feel you can also do?

While you’ll want to also add your own spin on things, get your base presence from what is already proven to work.

So, where do you find out what works well?

If you have a trainer who can run performance exercises with you, that’s all well and good. Unfortunately however, most musicians aren’t in the position where they’ve got these resources available to them.

Fear not however, as I’m about to share with you a tool which is nearly as good:

That’s right, by doing a quick search on Youtube you have access to some of the best and worst performances known to man! Search for acts in your genre who you know and respect, and see who has the best stage movements of them all. Pick up tips from these videos along the way.

Record Your Performances And Analyze Your On Stage Movements 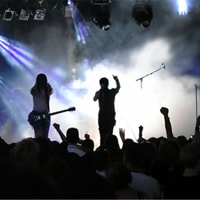 This is the second biggest stage presence tip I can give you. After getting ideas of what moves you should be doing on stage by watching others, the next step is to practice your movements and plan out what you’re going to do.

Don’t stop there though. It’s easy to feel you’re now doing the right moves, but how can you know for sure? Easy, record yourself practicing!

Ideally, you should do this before you perform a gig. Learn all your moves, then record yourself acting out the show. Have a look at the recording and see how it comes out.

By watching yourself perform you’ll know for sure. From here you can fine tune anything which has potential and get rid of anything which isn’t quite working.

Self analysis is all important when it comes to building stage presence. This is why dance studios are often fitted with mirrors all around the room; so dancers can see when they do and don’t look good. If you can’t see for yourself, there’s no way of knowing what the final outcome will be.

Get The Crowd Involved

Having a good stage presence isn’t all about you. The reason you want it is so the crowd have an entertaining show put on for them and they enjoy themselves. Looking at it from that point of view, it makes sense for you to try and get them involved.

Now I’m sure we’ve all been in the crowd where an ‘entertainer’ tries to get us involved in a way we really don’t want to. That said, when done right, having the crowd become part of the act can do wonders in terms of making them feel like they’re part of a bigger picture. This can increase the chances they’ll become a fan if they’re not already.

So, how should you get them involved? Well, that depends on your act. Here are some ideas:

What crowds want in different genres vary, so you need to once again do your research. Find out what audiences in your genre react well to. Have a look on Youtube or go to shows of the top artists. See what they do well and which they slip up on. Can you do better?

Always Have A Backup Plan

As I’m sure you’re aware, things don’t always go to plan. While it’s good to prepare as much as possible for the perfect show, you should also prepare for the unexpected to happen.

Whatever it is, it shouldn’t be enough to stop the show going on. Always prepare for things not going quite right, and get used to adapting on the spot. As they say, the show must go on!

If you want to be an all round musician, you need to learn how to have stage presence and improve your performance. As many musicians overlook this important skill, getting it right can help you stand out in this area.

So, have you practiced your on stage presence? Is this something you can improve on? Let us know in the comments.