You are here: Home / Getting A Record Deal / 13 Record Labels Based In London, Some Looking For Artists 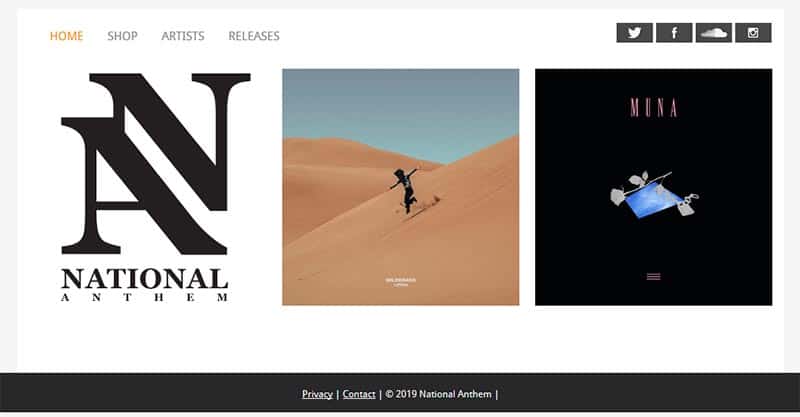 Record labels are not dead. Even though people are more connected than ever, labels offer a framework that many independent artists find useful.

These days, labels are more than just labels. Some manage artists, promote shows or even have their own streetwear brand – you get the idea!

The modern label is about connections, clout, brand power and connecting artists with fans.

The UK has always had a strong history of independent record labels, many of which started during the DIY/punk scene explosion.

In this guide, I’ll take you through 13 independent London-based labels, some new, some legendary and some of which are still looking for artists.

P.S. If you’re looking to get signed to a record deal, you’ll want to read this. 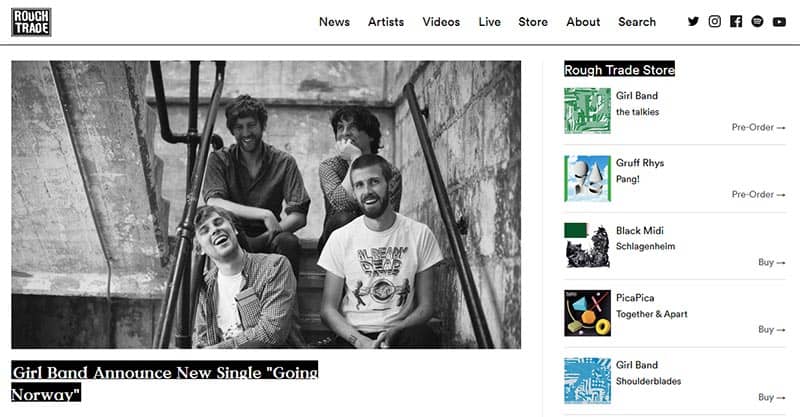 Rough Trade Records is a legendary indie record label. It was established in the middle of the punk explosion and has gone on to release a catalog of music from some of the most gifted and unique artists.

Rough Trade is the old guard of independent labels. Their early roster was unbelievably successful and influential. The Smiths, The Fall, Stiff Little Fingers – the label’s first ever release sold over 100,000 copies.

While the label went bust in 1991, it was revived a decade later and soon signed a band from New York called The Strokes.

The label is now owned by Beggars Group and manages artists like Girl Band, Starcrawler and Black MIDI.

Check out their past roster on their website and prepare to be amazed at the glut of amazing music they’ve released.

The label does accept demos. On their website, in the bottom left corner, you can find a link to send an email to the label. Make sure to send links only. No attachments. 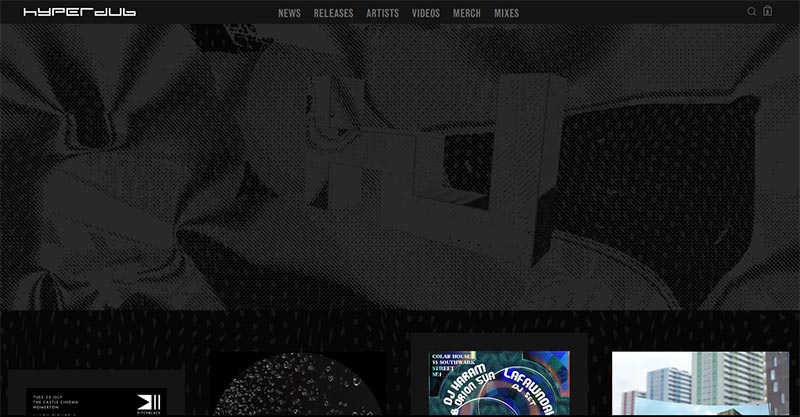 Dubstep is arguably the most influential musical style to come out of the UK in a decade.

Hyperdub has been on the ground floor of dubstep since its appearance in the underground EDM scene.

The London-based imprint is run by Steve Goodman, a Scottish DJ/Producer.

The roster includes famous Dubstep artists like Burial, Joker, King Midas Sound and by Steve Goodman, the label’s founder, under the name Kode9.

You can find a ton of music on their website, along with longer mixes made by some of their artists.

Unfortunately, there doesn’t seem to be an easy way to send them a demo. Besides a info@hyperdub.net email address, you’re better off meeting a representative at a showcase or industry event. 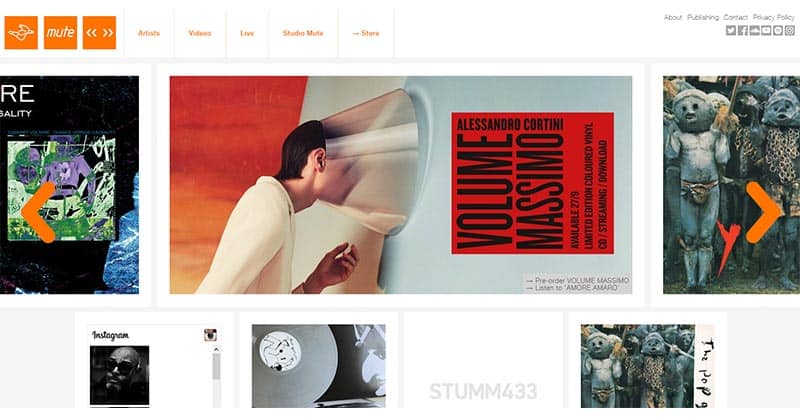 Mute Records is an indie label founded in 1978 by Daniel Miller. He founded the label to release his own 7” record, which turned out to be a huge success. After that, he started picking up and releasing music for other artists.

The label has an expansive roster including huge artists like Nick Cave & The Bad Seeds, Depeche Mode and even Moby.

As a label, Mute is multi-faceted. They have the UK-based label, a Mute North America division with bands like M83, The Knife, Jose Gonzalez and Fever Ray, a Mute Management division and Mute Song.

Mute Song represents artists and songwriters from all genres, and acts as a publishing company. They now represent a catalog of over 20,000 songs.

Right on their website, Mute says they love to receive demos at demos@mute.com.

They ask that you send no more than four places to stream music, and even just send three or four songs to begin with. Also, they do not accept attachments.

It’s important to adhere by these requests, as labels get an overwhelming amount of submissions. 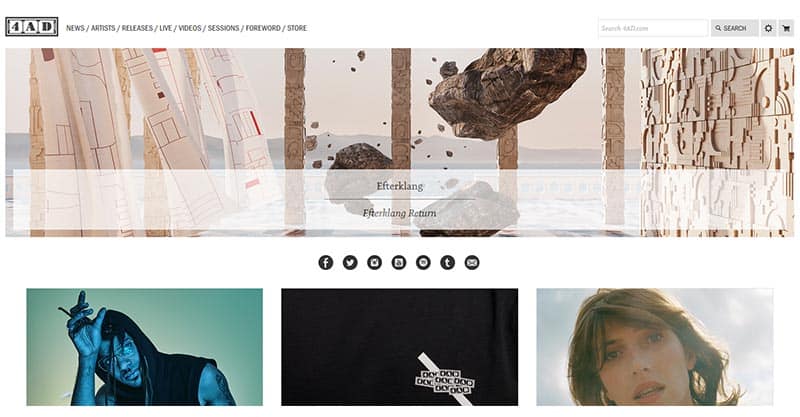 4AD was started in 1980 as a branch of the Beggars Banquet label.

At first, it focused on post-punk, before setting sights on the U.S. rock scene, where it found great success. Namely, the label signed The Pixies.

Since then, they have signed a remarkable roster of hip indie acts from North America and the UK.

4AD accepts demos at demos@4ad.com. While they doesn’t specify, I would recommend sending only streaming links and no attachments.

Many labels don’t accept any emails with attachments, as they take up too much room in their inbox. 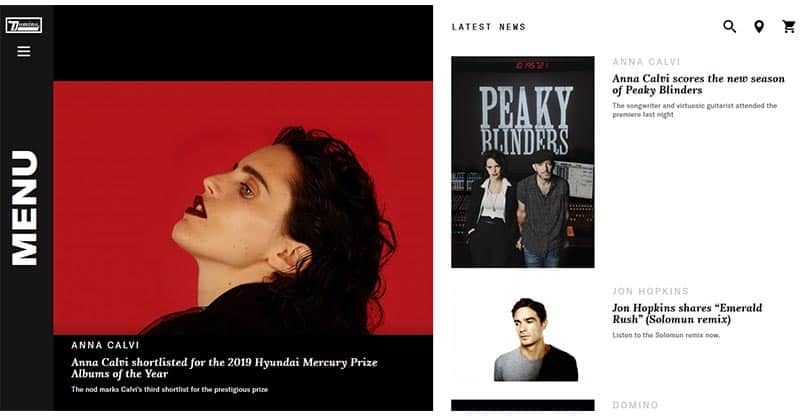 While still an indie label, Domino is sizable. In 2006, they released Whatever People Say I Am, That’s What I’m Not by The Arctic Monkeys – this became the fastest-selling debut album in UK history.

Before that, Domino released music by Franz Ferdinand, who opted to sign with an indie label instead of a major.

Because of the success of these major artists, Domino continues to release music from offbeat and up-and-coming artists and bands. They have a huge roster, and it features Anna Calvi, One True Pairing, (Sandy) Alex G and more.

Domino does accept demos, but they only do so via SoundCloud. Find Domino on SoundCloud and send them your music with a direct message. They do not accept postal submissions nor do they accept emails. 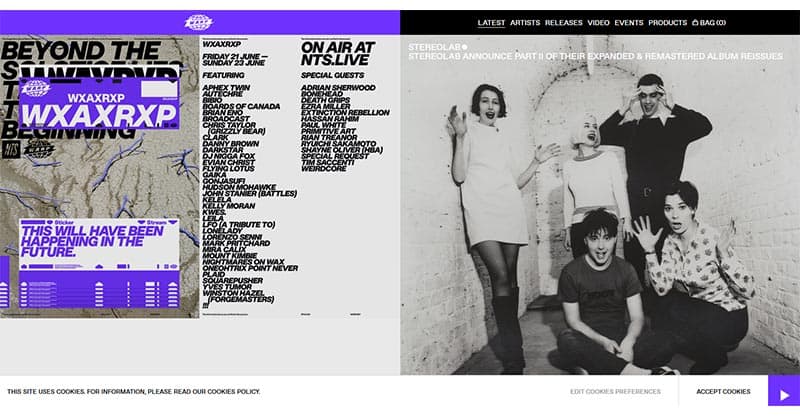 Warp Records was on the forefront of techno and other music making electronic bleeps and bloops.

Early on, techno acts like LFO called Warp a home. As years went by, the label evolved to release brainy electronic music like Autechre and brainy rock music like Grizzly Bear.

Now, Warp releases more of the same – a roster of artists, some are borderline legacy acts, some are groundbreaking and fresh, but all are experimental and influential.

Aphex Twin, Boards of Canada, Brian Eno, Flying Lotus, Stereolab and more. They have over 150 artists, so it’s impossible to get through all of them!

Warp does not accept demos. On their website, they say that if you must send a demo, send an email to their general enquiry email address with a streaming link, but do not send it anywhere else and don’t expect any feedback.

While it doesn’t hurt to try, I wouldn’t get your hopes up about this one! 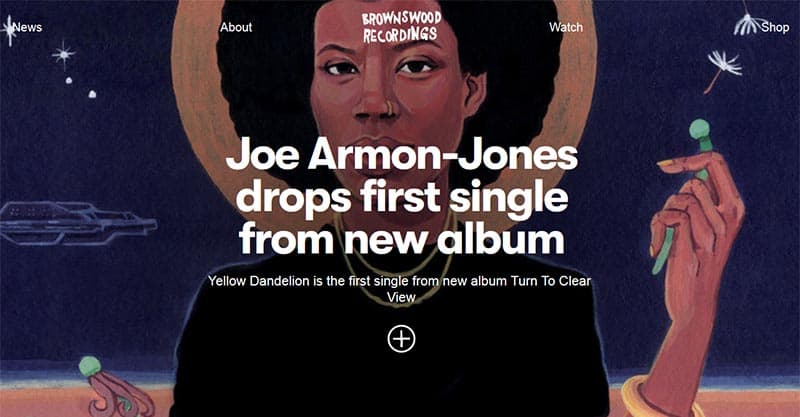 Brownswood Recordings was founded by Gilles Peterson, who was a DJ for BBC. As a DJ, he received a ton of demos, most of which never had a home.

He wanted to start the label to give these records a home. From ambient music, to jazz, to hip-hop beats, to World music and Cuban club music – Brownswood is diverse and influential.

Recently, the label launched Yussef Kamaal’s Black Focus – a forward thinking Jazz record that did really well, and a compilation called We Out Here – a compilation of nine newly-recorded tracks from London’s jazz scene.

As far as London based jazz labels that still have their finger on the pulse of the jazz scene, Brownswood Recordings is the place to look.

On their website, there is no easy way to send the label demos. That’s not to say it’s impossible, but you’re going to have to dig.

They also don’t release music often. They only have 16 released so far, and the last one was a compilation put together by the label’s founder. 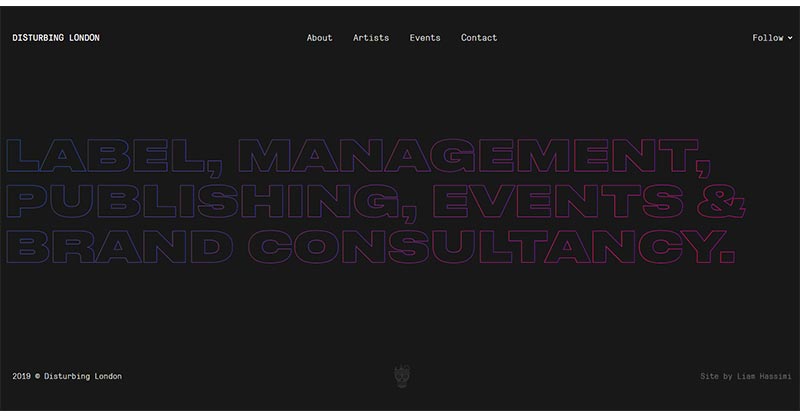 Disturbing London was founded by Tinie Tempah and Dumi Oburota. The label has released Tinie Tempah’s entire catalog of music and manages him besides.

The label has global aspirations – especially since signing Nigerian superstar Wizkid, but they also have London stars like A2, Yxng Bane and Yungen.

They are a 360 entertainment company as much as they are a label, which seems to be more common with hip-hop and R&B labels. They offer artist management and brand consultation, and they run a streetwear brand called DSTRB.LDN.

The label does not explicitly say they accept demos, nor do they forbid it. They have a Contact page on their website, where you can try your luck and send them streaming links! 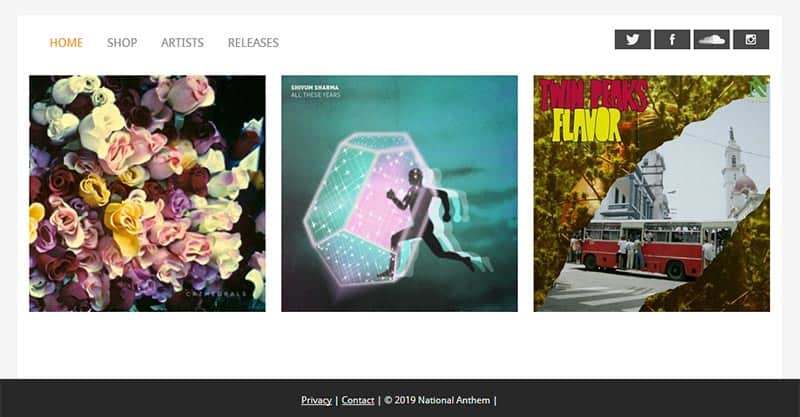 National Anthem is a cool label out of London that was started by a radio plugger named James Passmore.

He launched the label in 2012 to release HAIM’s first EP called Forever. Having seen HAIM at a few industry showcases, he knew he loved their alt-pop sound and wouldn’t remained unsigned for long.

He’s since launched more alt-pop from artists like Chvrches, Brolin and Sir Sly.

The label always releases on digital and on fancy collectible vinyl.

Because the label is firmly in the pop genre, it’s often a stepping stone for artists going from a smaller label to a bigger one. By making collectible vinyl, National Anthem insures that they always a corner of the market.

It does not have specific instructions re: demos, but I would say feel free to send one, so long as it’s a streaming link. 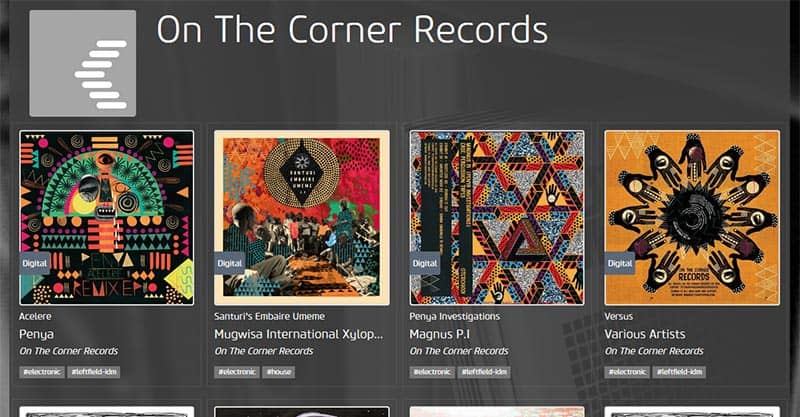 On The Corner is a small label releasing a wide variety of offbeat music; from modal jazz to Afrobeat, to eastern electronica – every release feels different and yet very on-brand.

If it tells you anything about the label, Brownswood Recordings boss Gilles Peterson often praises On The Corner for their genre-bending open mindedness and frequent releases.

As far as I can tell, the only way to get in touch with the label is through Bandcamp and Facebook – no reply is guaranteed, but you may as well try sending some streaming links.

The label is small, and probably inundated, but if you make music that seems to suit their brand, give it a shot. Little labels like this are often on the hunt for more music that suits their brand. 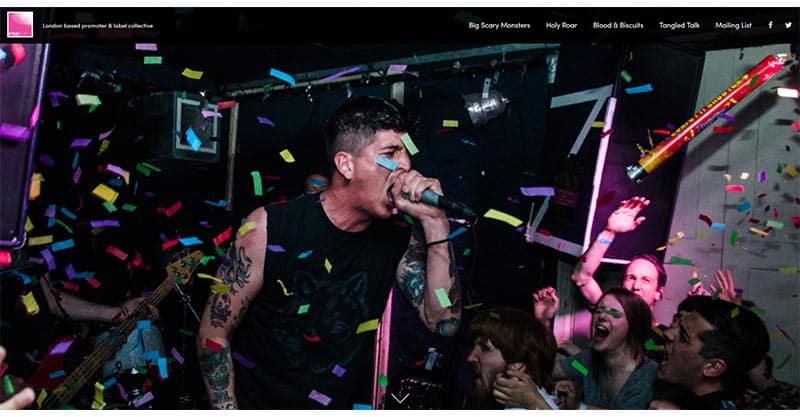 Label collectives are an interesting idea that allows several labels to pool resources to offer an expanded level of marketing, distribution, and collaborate on joint releases, gigs and more.

Together, they release a lot of loud music from the UK. Pop-punk, math rock, sludgy metal – if it’s loud and it rocks it could find a home on one of the Pink Mist labels.

From Pink Mist’s website, you can visit the websites of any of the other labels mentioned and submit from there. 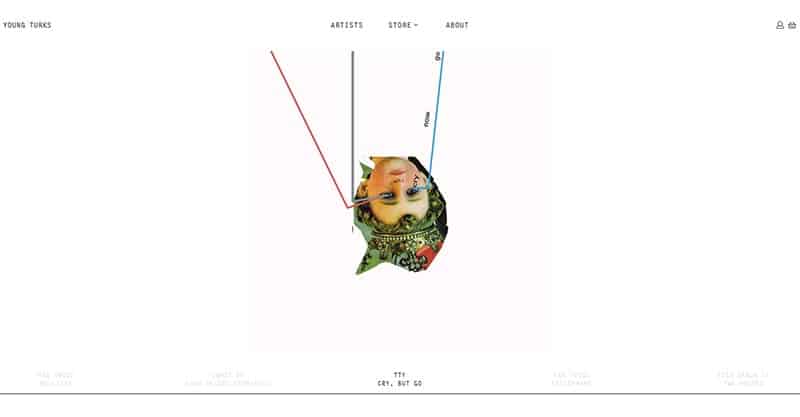 Young Turks was a boutique label that hit the big time.

After a series of increasingly outrageous club nights, Caius Pawson turned Young Turks into a label in 2006.

Young Turks has a hip roster ranging from neo-soul to dubstep.

Without a doubt, the label’s biggest success was releasing the xx’s debut album in 2009. This elevated them from an upstart to a chart-topping big gun in the label scene.

Since then, Young Turks has organized huge festivals like Night + Day and even a NYE part in Mexico.

They still release new music as well – one of their big acts right now is FKA Twigs.

It does not appear as though they accept unsolicited demos – their website is devoid of much contact information. It is a hip and well-designed website though, so check it out anyway. 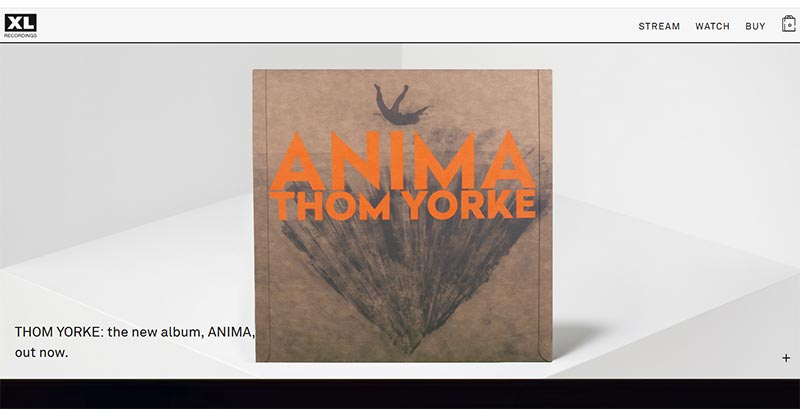 As mentioned above, XL Recordings is another legendary indie label founded in London.

The label only releases about six albums every year but they are usually notable.

Basically, XL is a big deal.

XL is also home to the aforementioned label Young Turks and to another affiliated label called Terrible Records.

XL does not accept demos and is hard to contact. Although they are independent, they are so large and famous, it would be difficult to convince them otherwise.

So there you have it, some of the best record labels in London.

But remember, ‘best’ is subjective.

There are many other top labels in the city that consistently produce good music, it just comes down to your personal taste.