You are here: Home / Music Theory / Circle Of Fourths – What It Is, How To Use And Memorize It, & More 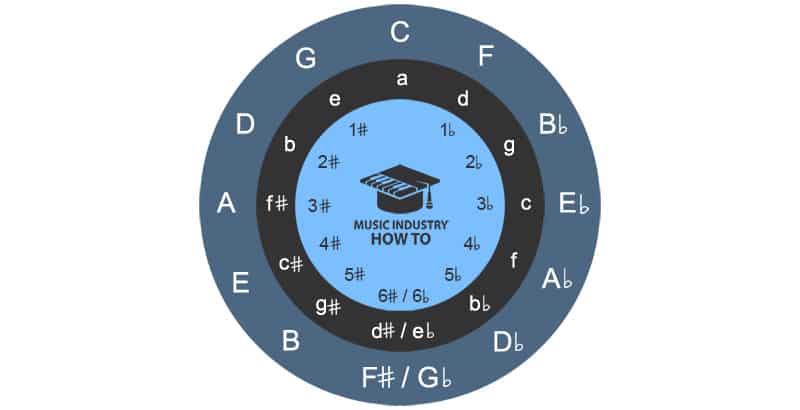 The circle of fourths is one of the most valuable music theory tools there is.

It explains the basics of music from top to bottom. There is more advanced theory, of course, and you can go much deeper into any area of music theory you want to.

But it will equip you with the foundation, which makes navigating advanced theory music easier.

Of course, you can’t unlock its secrets unless you study it. So, let’s explore the circle of fourths and deepen our knowledge of music.

Circle Of Fourths Explained – What Is It? Definition Revealed

The circle of fourths is the clock of music, showing the relationship between the 12 key signatures.

There are 12 notes in music and therefore 12 key signatures, each with a varying number of sharps and flats.

These 12 keys each contain seven notes in the form of a diatonic scale. These diatonic scales are connected to the chords that belong in each of these keys too.

If you used all 12 notes to construct a scale, you would merely have what’s called a chromatic scale, which is sometimes used in music, but isn’t in any key signature specifically.

Since music is always played in one of the 12 keys, it’s important that you understand how each key differs.

Of course, there are songs that cycle through different keys, and there is also atonal music, which may have been written for a specific key, but it’s so all over the place that you can’t tell what key it’s supposed to be in.

The circle of fourths is a diagram showing you how many sharps or flats there are in each key. In other words, you can use it to learn which notes to turn into sharps or flats for any key.

It also shows which key signatures are closely related, meaning they are easy to transition in and out of if necessary. This is called modulation.

The basics of music theory can be explained relatively easily using the circle of fourths, making it a valuable practice to commit to memory.

Circle Of Fourths And Fifths Compared – What Is The Difference? 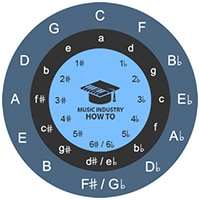 With the circle of fifths, if you move in a clockwise direction, with each passing key, the number of sharps continues to increase until it transitions into flats and the number of flats goes down as you continue around the circle.

Eventually, you can work your way around the entire wheel, coming back to the point you started at.

But what if you moved in a counterclockwise direction around that circle? Would that break the concept?

Well, if you started at C and moved one space to the left to F, you’d see that the number of flats increases by one. Then, when you go from F to Bb, you get two flats.

So, there is a pattern, even when you go in the opposite direction – just a different kind of pattern.

When people talk about the circle of fourths, this is exactly what they’re talking about. The relationship between C and F is a fourth. And, from F to Bb is a fourth too.

You can get around the entire circle by moving in fourths.

One is not more useful and the other less. They are both equally useful, assuming you understand the pattern.

In essence, we are talking about the same diagram, only coming at it from a different direction.

How To Use The Circle Of Fourths And The Benefit

The only exception might be that you’re going to be thinking more in terms of flats than sharps because of how the pattern works.

Here are a few things you can do with the circle of fifths, which is also connected to its benefits:

The diagram shows all key signatures and how many sharps and flats are in each. Most circle of fourths diagrams show the relative minor keys too.

In addition, you can identify sharp and flat keys, as well as enharmonic keys (key signatures that go by two names instead of one).

This is the most practical and straightforward use of the circle of fourths, and it’s how most people use it, but we can always go deeper.

Read Scales Off The Diagram

I tend to think this is less practical, but it’s certainly possible. Let’s look at an example.

I you’d like to know what notes are in the F major scale, for instance, all you would do is start one space to the right of F, which is Bb, and count to seven in a counterclockwise direction.

So, you should have gotten the notes Bb, F, C, G, D, A and E. These are the exact notes in the F major scale, just out of order.

If we reorder them, starting with the tonal center (F) and follow alphabetical order (keeping in mind that the musical alphabet only goes to G), we get F, G, A, Bb, C, D, E.

There are other ways to read scales off the diagram too.

Building chords is easier using the major scale compared to the circle of fourths, but again, it’s a possibility.

I’ll just give you one example here, so you can see how it works.

In case you didn’t know, chords are built in thirds.

An F major chord, for instance, is made up of the notes F, A and C. You can tell just from looking at the F major scale. 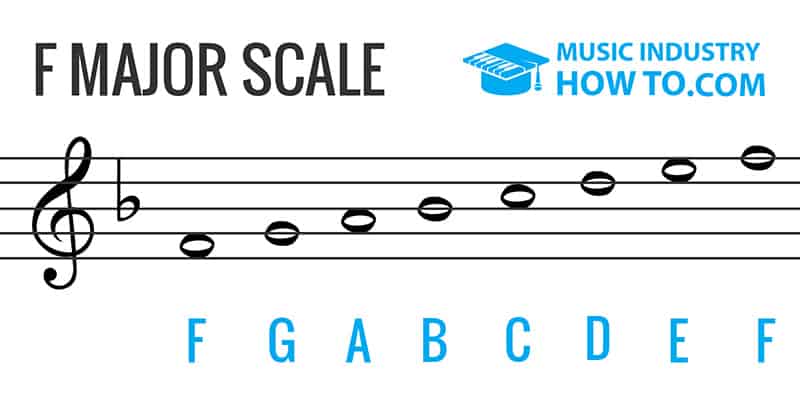 If we take the circle of fourths in reverse, we have the circle of fifths. So, if you want to identify the fifth in any scale, all you need to do is move one space to the left.

That means the fifth in F is C.

To find the third, we need to move four spaces to the left. That’s how you get your third, which is A.

Draw a triangle between the three notes and you can see how they’re related to each other on the circle of fourths.

Then, you can just move that triangle around to identify other major chords.

Although I won’t be covering other chord types here, minor chords work much the same way (the third becomes a flatted third) and, with 7th chords it’s just a matter of skipping another note in the major scale and finding the next “third”.

Here, too, the major scale is more practical than the circle of fourths. But hey, it’s all interconnected, so we may as well take a look.

The most important chords in any key are I, IV, V and vi. This is what you hear in pop songs all the time.

You can tell from looking at the first, fourth, fifth and sixth degrees of the C major scale too:

In case this wasn’t already clear, with the circle of fourths, if you move in a clockwise direction, the relationships between neighboring notes is always a fourth.

If you move in a counterclockwise direction, the relationship between neighboring notes is always a fifth.

So, to find the IV and V chords, all you need to do is look to the tonal center’s left and right.

Use F as an example. That automatically makes F our I chord.

To the right is Bb. That’s our IV chord, because it’s a fourth above F.

To the left is C. That’s our V chord, because it’s a fifth above F.

But how do we find the vi chord, which is the relative minor? This chord can add a lot of color to our music, and if you start on it, you can even create minor progressions.

The vi is three spaces to the left of the tonal center. So, in this case, that would be D.

So, your vi chord is Dm.

Now that you know your I, IV, V and vi chords in the key of F, you can easily create great sounding chord progressions in that key.

Neighboring keys are always closely related, so if you want to learn how to effectively modulate from one key to another, the circle of fourths can be a handy tool.

You can also use the circle of fourths to transpose songs.

Transposing isn’t always fun or easy, but let’s say the song is in the key of G, and the singer has requested to sing it in the key of E instead.

In G, we know there’s just one sharp. But the key of E has four sharps.

Knowing that, and knowing what you now know about the relationship of each key signature, you should be able to figure out which notes become sharps in the key of E.

How To Memorize The Circle Of Fourths

My first recommendation would be to learn the major scale in every key.

This is relatively easy on an instrument like guitar because scale patterns are movable. A little trickier on piano because of the black keys.

Why is this helpful? Because if you know the major scale, you can identify the fourth degree in every scale. That allows you to move around the circle of fourths with ease.

For example, the fourth in the key of C is F. That tells you that the neighboring key to C on the circle of fourths is F. And, there is one flat in the key of F.

But which note becomes a flat? It would be the seventh degree of the C major scale, which is B. So, in the key of F, B becomes a Bb.

Bb also happens to be the neighboring key to F and has two flats. You must keep the flatted note from the previous key, so Bb stays the same.

The seventh note in the F major scale is E, so Eb would be the second flat in the key of Bb.

Are you starting to get the idea? It’s all just one massive pattern, and the more you work with it, the more you’ll make sense of it and commit it to memory.

If you have a thorough understanding of the major scale, it makes it easy for you to move around the circle of fourths without issue.

The other way is to memorize the order of keys, which can be a little more cumbersome, but certainly possible.

Looking at the diagram, it’s:

Does anything stick out to you as you look at that order of notes?

Can you see that the word BEAD repeats twice in that pattern, first with flats, then without?

That instantly makes the order of notes easier to remember.

Then, you could create a bit of a mnemonic device surrounding the BEADs. It doesn’t even have to make sense. Try something like this:

It’s silly, but that’s why it works. Just don’t forget that both BEADs represent four key signatures and not just one.

That’s much easier than rote memorization, which in my opinion, only works for quizzes and tests anyway. You forget shortly after you’ve taken the quiz.

Both methods I’ve talked about aren’t “memorization” as they are reinforcing the concept through different channels, and I think that works better.

With this knowledge in tow, you’re ready to explore more advanced concepts in any area of music – blues, jazz, classical, rock and pop or otherwise. Have fun!