You are here: Home / Music Business / 7 Best Apps For Rappers On iPhone And Android 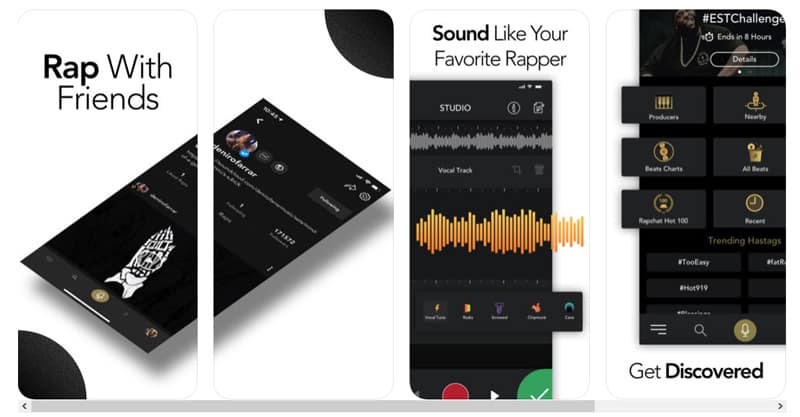 It’s never been easier to be a rapper.

Don’t get me wrong. Writing great lyrics and getting good at rapping will take time.

But there’s so much technology out there that makes it easy for you to come up with lyrical ideas, find beats to rap over, make your own beats on the fly and even gain exposure for what you’re doing.

And, that’s what we’re going to be looking at today – apps that allow you to do a variety of things as a rapper.

Ever thought about making your own beats? Of course, you have!

Only, you probably don’t want the headache of having to set up a home studio, learn how to use a DAW, play keyboard, get all your cabling right and so on.

Good news – apps can make the process of making beats easy and fun!

And, Music Maker JAM is great for creating all types of beats and backing tracks – not just for hip-hop.

Now, don’t get me wrong – it will take a while for you to figure out your workflow on this app. But it’s still a lot easier than setting up a home studio – cheaper too.

Music Maker JAM is available for both iPhone and Android.

Battle Me – A Battle Rap App For Android And iPhone

Here’s an app I think you’ll get a kick out of if you like competing with others.

Now, as with many other rap apps, this one lets you choose beats to rap over and it’s also got a rhyme search helper in case you need a little help with your lyrics.

But the coolest thing about Battle Me is probably that you can join tournaments and even earn money on your performances.

Supposedly, you might even have the chance to get your rhymes in front of promoters, labels and famous personalities. I’m not sure whether that’s true, but it can’t hurt to try, right?

Check out Battle Me on iPhone or Android.

Rapchat Provides Beats For Rapping Over

Rapchat offers over 100 beats you can spit your rhymes over. You can then share your tracks with a larger audience or just your friends if you prefer.

You can also listen to other people’s creations and rate their work.

If you’re thinking about becoming a professional rapper, this is a good place to start, because you get to hear what other people are up to and make some connections. In the music business, it is all about who you know, so don’t be afraid to reach out.

Rapchat is available for iPhone and Android.

Looking to have a little fun? Then you’ll enjoy AutoRap. This is a voice transformer app.

In talk mode, all you need to do is say something into your phone’s mic and the app will automatically turn your words into something more street.

In rap mode, you can find a beat and spit some rhymes over it. There are only two free beats, though you can tap into well over 100 if you’re willing to spend a bit of money.

The tracks you create can be shared via text. You also have the option to participate in a rap battle. There’s a leaderboard keeping track of the best of the best, which is perfect for those with a competitive spirit.

AutoRap is available for iPhone and Android.

Are you ready to head into battle?

With battle rap increasing in popularity, there is no better time to jump in on the fun than now. Get battling! Your rhyming skills will improve fast having to think on your feet all the time.

Rap Wars Free is also a decent tool for meeting other rappers, rating their work and even doing a few solo recordings.

So, if you’re ready to upgrade your skills and network with other artists, you should get this app immediately. It’s available for iPhone, and although it used to be available for Android too, it doesn’t seem to be anymore.

Sometimes the only thing you need is a simple voice recorder.

After all, you do need a way to capture your ideas when they come to you. They may not be ready to share with the world the moment inspiration hits, but you should record your ideas before you forget. Inspiration doesn’t come around all the time.

What makes this app great is that it records audio in high quality. And, if you want to edit your recordings, share them around or send them to your PC, you can.

Great for guerrilla style rappers who need a quick way to get their ideas down. Available for Android and iPhone.

Evernote Is Great For Rappers

I know, I know. I’m talking about a productivity app that everyone uses. But hear me out.

Sometimes ideas come to you at the least opportune moments – in a public bathroom, at a restaurant, at a theatrical performance or otherwise. Ask yourself – do you really want to be spitting rhymes out loud in these places? Probably not.

So, with thousands of thoughts going through your mind every single day, it would be wise to capture the ones that you like. Evernote was built specifically for this purpose.

Good news – Evernote is also available for Android and iPhone.

And, let’s be honest here. You can use whatever note taking app you like – it doesn’t have to be Evernote.

What Should I Look For In A Rap App?

This just depends on what you’re looking for, really.

Some rappers want note taking apps. There are plenty of them out there, and some of them come with cool features.

Others want voice transformation or auto-tuning apps. I’m not judging – it can be a lot of fun to play with these types of apps.

Another popular category is beat making. Again, there are a lot of interesting apps out there in this category, even if they weren’t made specifically for rappers and hip-hop beats. It might be worth experimenting with a few, just to see what’s available.

As well, there are those apps that allow you to rap over beats, battle rap and even participate in contests. These can be great because you can even network with other aspiring rappers.

Finally, there are plenty of apps that have little to do with rapping or hip-hop but could still add value to you in some way – alarm clocks, metronomes, rhyming dictionaries, social media apps and the like.

If I were you, I would just experiment with every app out there, one by one. You never know when an app might inspire you or allow you to achieve more than you thought possible.

What’s The Best Rap App Out There?

Find apps that enhance your experience. And, if you’re looking to build a career out of your rapping, use apps that challenge you, put you in front of more people and allow you to get lots of practice.

Do I Need Apps To Be A Rapper?

Just because there are apps available doesn’t mean you need to use all of them.

I’m a guitarist. I think I have a grand total of two guitar apps installed on my phone.

The great thing about apps is that you generally have your smartphone with you wherever you go. So, even when you’re not at home or at the studio, it gives you a way to capture ideas while they are still fresh.

Everyone says they’ll remember their best ideas and soon regrets not writing them down when they forget later.

And, you’ve probably noticed how I do a lot of writing. I like to write on my phone when I’m out and about and have a bit of spare time. It helps me meet my daily goal of writing at least 1,000 words and advancing my various projects. I find it to be a better use of my time compared to checking notifications on social media too.

So, no, you don’t need apps to become a rapper. But they can help.

Why Would I Want To Use Productivity Apps? 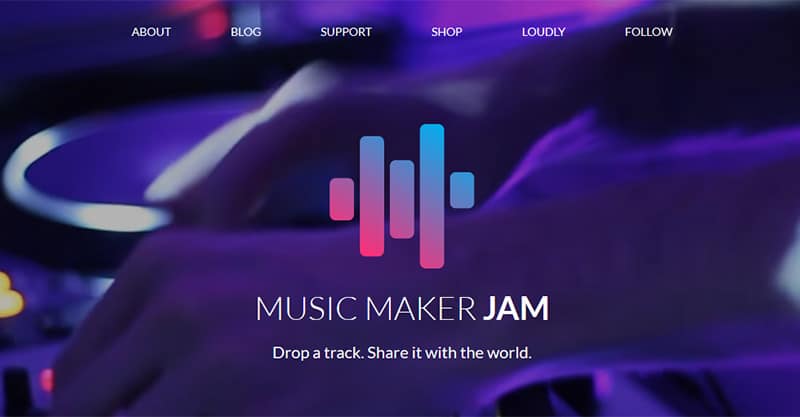 Have you ever noticed how some people get a lot done even though they have the same 24 hours in a day?

To be successful, you’re going to need to work on your craft. I don’t care whether you’re a rapper or a cellist.

You’re going to need to set goals, plan, track your time and your schedule, write down your ideas, share your work and connect with others and a great deal more. Amazingly, you can do a lot of this work right from your smartphone.

The point is that you need to be hardworking and consistent or you won’t get anywhere. Some people get lucky breaks, but they are rarely sustained or followed up with equal passion and force. Those who’ve had to work hard to prove themselves are generally more appreciative of the success they experience and work hard to keep the momentum going.

What does it mean to be hardworking and consistent? At times, it means making sacrifices for your dreams. It could mean staying up late, waking up early, turning off the TV, quitting alcohol and so on. I’ve met a lot of successful people who will testify to the fact that they had to change to get to where they wanted to go.

If you’re an aspiring rapper, then I’m preaching to the choir. You know all this already.

Is It Possible To Produce An Entire Album On A Phone?

This is the great thing about the age we live in. There certainly aren’t any rules against recording an entire album on your phone, and all the apps you could possibly want are available.

I think your workflow would be slightly stunted by the fact that you must switch between different apps for different purposes. And, while you can certainly get a good sound from your phone, your final mix probably won’t be comparable to a studio recording.

Still, there are people going in this direction. Recording guerrilla style has some novelty to it, and if your brand doesn’t revolve around a Hi-Def image, then Lo-Fi recordings might suit you just fine.

So, yes, you can produce an entire album on a phone, at least in theory, and you should end up with a decent product too, assuming you know what you’re doing.

iPhone Or Android – Which Is Better For Rappers?

This is mostly going to come down to preference.

In theory, apps are cheaper for Android phones. But iPhones tend to have a more stable iOS. There are tradeoffs no matter what factor or feature you’re comparing.

I’ve never had an iPhone myself, though I think they are great phones. Android suits me well because I’m not a heavy app user, and the phone itself is fast for what I need it for (calling, texting, instant messaging, writing, etc.).

Whatever helps you get your work done – that’s all that truly matters.

I remember a time when making beats was particularly difficult. With the emergence of DAW software and various apps, it’s never been easier to make beats, rap over them and even share your tracks with the world. Honestly, you could even do some tracking on your phone if you wanted to. What an amazing time to be a rapper.

So, don’t wait around. Just get started. Download a few apps and give them a try. You never know where it could lead.