You are here: Home / Getting And Performing Gigs / How To Put On A House Concert And Host Them Successfully (A Guide For Musicians) 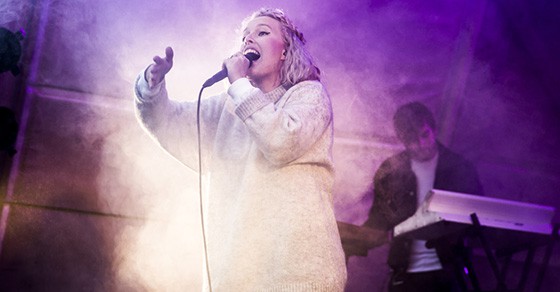 House concerts have been around forever in one form or another – from the East Coast kitchen parties to live band parties – but lately, they’ve become a way for artists to make good money and for fans to experience music and art up close and personal.

Having hosted and played many house concerts, I’ve become familiar with the good and the bad of both hosting and performing. In fact, two years ago I went on a house concert “tour” organized by Home Routes – an organization that sets up tours of house concerts for all sorts of artists.

On this tour, we saw the gamut. There were some shows that were rewarding, special, and financially lucrative experiences. There were also others where we kind of felt like we were just a replacement for a TV.

I’ve also recently become involved with an organization called Sofar Sounds – they set up secret house concerts in strange places and film them. It’s a great community, and I love the concept behind it.

Artists love house concerts, because they have the opportunity to make “forever fans”. These are the kinds of loyal fans that will donate to your PledgeMusic campaign and buy your merch. House concerts are also really intimate and fun. On top of that, they generally pay pretty well.

Audience members love going to house concerts because they are intimate and private, you can bring your own booze, and it’s usually a fun community of friends putting it on.

Hosts love putting on house concerts because it’s a very fun and artistic way to host a house party, everybody is guaranteed to be in a good mood, and they get to have amazing artists right in their house. When done right, house concerts are amazing for everyone involved.

So here is my guide to putting on a great house concert. This is a valuable skill, because as a musician, at some point, you’ll probably find yourself helping out a friend in need and putting on a house concert for them . Or, maybe you just think they’re fun to organize! Here’s what you need to know to make your next concert a success.

Setting A Ticket Price Is Recommended 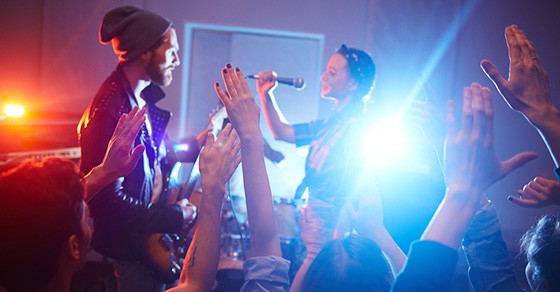 While in certain scenes (such as the punk scene or EDM scene), a donation-based approach is the norm, in most situations, a set ticket price is a good idea. Here’s why:

Even though it’s “just a house show“, there is still a lot of energy that goes into performing and then chatting with the audience afterwards. Musicians deserve to get paid for their work, and having a set ticket price means they know what they’re getting into and whether it’s worthwhile.

At house concerts, musicians are supposed to get paid fairly. They may even expect it, especially if they’ve played a few house concerts before.

A House Concert Is More Of A Concert Than A Party

If you’re in to hosting a true house concert, you need to do what you can to make it a truly concert-like experience. Having a ticket price encourages people to pay attention to the music and appreciate the fact that it’s so intimate and personal. People always value what they pay for more than what they don’t pay for.

Tickets Can Be Used As RSVPs

You can take cash, eTransfers, or checks, whatever you want. Most house concert hosts will also have a bucket or a hat at the door to encourage anyone who hasn’t paid to pay up then and there.

In order to make sure everyone feels comfortable and to set the right tone for the concert, you need to set up some concert seating. Figure out where the artist is going to be setting up, and line up some seats in front of that area. This gives people direction and lets them know they are at a concert.

Of course, you probably won’t have enough seats for everyone – that’s totally fine! You really don’t need to have a seat for all in attendance. The point of the seating is to offer those who might need seats (older or disabled folks) a place to sit, and to set the expectations for the night.

House concerts are as casual as they are formal. Audience members often stand, sit on the floor, find some space on a couch, or just find a comfortable place from which to enjoy the concert, which is why you don’t need seating for everyone.

You may also want to set up some additional extras, like a makeshift stage, a good fog machine for atmosphere, some nice lights or other. These could all add to the mood, depending on what you want to achieve.

Say A Few Words Before The Show 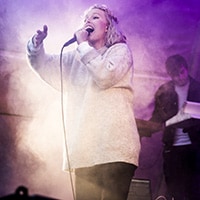 I’m very much about setting up a vibe and an atmosphere before a house concert. My least favorite kinds of house concerts are ones where the band is playing, but they might as well not be. These are usually birthday parties and barbeques. For both the artist and audience’s sake, it’s better to set up a good, organized vibe.

It’s always nice for the host to say a few things before the concert starts. This way you can really set the tone for the occasion. Talk about the artist, talk about how lucky the audience is to get to experience their music this way, and mention the tickets and the artist’s merch. This will go a long way and help you build and maintain a strong relationship with the artist.

Introductions also have a way of lending more credibility to the artist.

Set Up A Place To Sell The Artist’s Merch

House concerts are a great place to sell merch as well as tickets. Audiences are usually very engaged and they get excited. Then they end up wanting to buy merch. Merch is one of the pillars of any artist’s tour finances. Giving them an easy way to sell it will make them very happy.

You can set up a table, or set aside some space on a counter top, whatever is most convenient. Artists will appreciate it if it’s somewhere visible and easy to get to.

Everyone loves food, especially when it’s free. However, it’s going to be hard for you to cook food for everyone – that takes time and money. Instead, encourage your friends or audience members to bring an item to share!

Most people won’t mind cooking something small to share with a group. It doesn’t have to be mandatory, just encouraged. The added benefit is if you take this step, you’ll set the tone for all future house concerts, that there should be food!

Provide A Meal For The Artist

Of course, this isn’t totally necessary, but boy do we appreciate it. You’re probably already making food for the concert, so making something to share with the band or artist performing shouldn’t be too much work, and is a very nice gesture.

Just ask if they would like to eat with you (most will say yes) and then consider if they have any food allergies. Artists are generally happy to eat whatever you cook, but it can’t hurt to double check with them.

Again, this can help create a great experience for the artist, who you should be building a relationship with, especially if you think you might want them back for an encore performance.

Providing some basics will make people feel at home and welcome. They’ll appreciate the gesture. Having drinks gives people something to do with their hands and makes everyone feel more comfortable.

How To Get Booked For A House Concert 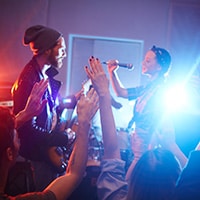 We’ve covered the basics of how to host a house concert. But if you’re looking to get booked into a house concert, here a few steps you can take to drum up some bookings.

First, post on Facebook (from your personal or professional account) that you’re looking to play house concerts. House concert hosts are always looking for new acts to book, and you will almost certainly get a few bookings this way. You’d be surprised by who is in your immediate and extended network of friends.

The next best thing you can do is talk to other artists, especially if you don’t seem to be getting any bites on Facebook. Most everyone has played house concerts, and they’ll almost certainly be able to put you in touch with people who host them. Sometimes, artists will even have their house concerts posted on tour posters and websites, which can give you an idea about where to go to get bookings.

Another place to check is house concert directories. These make it easy to find potential venues in any state or province to flesh out your touring schedule.

Some house concert hosts have Facebook pages and websites – these are usually the most organized and professional hosts. To see if there are any of these in your city, search for [Your City House Concerts] on Google. Something will pop up! Again, these are the best opportunities to go after.

Once you find an opportunity that’s right for you, just send a nice email telling the hosts who you are and when you want to play. If you’ve played house concerts before, let them know. Better yet, if you have live, acoustic video content, send them that.

Here are a few pieces of press that will make your life easier when booking house concerts:

This is about all you need. The main thing to focus on is great music. People will book you if they like your music.

How To Make The Most Of Every House Concert You Play

If you’re a musician, here are a few things you can do to maximize the effect of any house concert you play:

Most importantly, house concerts are relaxed, fun gigs – have fun and make sure your audience has fun too!

Playing a house concert is one thing. Hosting is another entirely. Your eyes will open to the practical realities of organizing a great show if you find yourself on the hosting end. This experience will teach you a lot, and will ultimately make you a better artist too. If you succeed in your hosting duties, people will also begin to see you as a bit of a tastemaker and influencer, at least on a local level.

It’s hard to hate an artist that’s doing something good for other artists. If you’ve never hosted a house concert before, you could be missing out on something amazing.