You are here: Home / Getting A Record Deal / What Do Record Labels Do? & How They Can Help You As A Musician 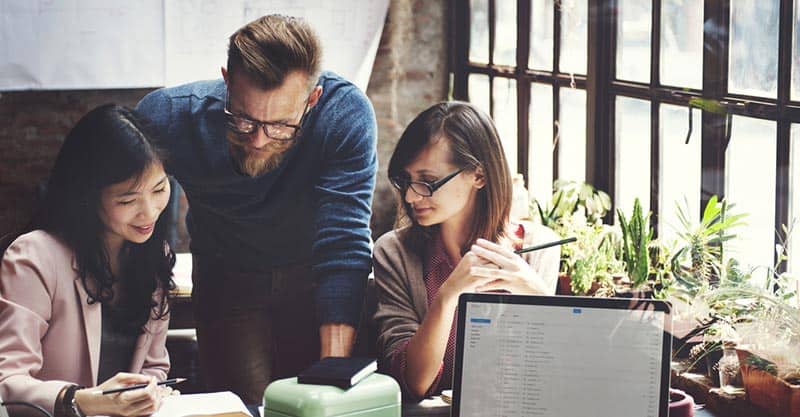 What exactly is it that record labels do?

Today, you can go about building a music career in a variety of ways. And, you don’t even need to rely on a label for your ultimate success.

There are so many paths you can pursue that don’t involve a label.

And, we even hear about artists like Ed Sheeran who are proving you don’t need a label – all you need is a competent partner or team and you can get the same results.

That said, some artists still want that elusive record contract. Still others would benefit from having a label backing their careers.

It’s not an either/or situation. More of a good fit/bad fit situation.

So, let’s look at what labels can do for you.

You may have heard of A&R reps before.

While they still exist, labels aren’t quick to sign artists they can’t make a financial return on. So, that has basically meant that an A&R person’s job description has expanded.

An A&R rep is essentially responsible for finding talent, overseeing the recording process and helping with marketing and promotion.

But when people talk about A&R, most of the time they are just talking about finding talent.

Now, roles in the music industry can be fluid in the sense that any position can be a combination of different tasks and responsibilities.

What I mean, for example, is that one producer’s task list could be completely different from another producer’s.

But sometimes an A&R person’s responsibilities will include choosing songs, finding personnel to record the album, deciding on a studio for the recording and so on (all of which may be the producer’s responsibility instead).

Artists don’t necessarily benefit directly from an A&R rep finding talent (unless they are the ones being “found”).

But they do benefit from an A&R person handling the recording process and assisting with marketing their release.

It’s so obvious that it’s sometimes not even mentioned.

But one of the things labels offer is a record deal, which is an exclusive agreement between a label and an artist.

Now, the exact terms of a record contract can vary. But usually it requires that the label funds the creation, distribution and marketing of releases.

Labels offer artists an advance, which is a loan, artists promise to pay back with their earnings. Labels are also obligated to pay out royalties to their artists.

Now, if you’ve been presented with a record contract (or multiple contracts), you should always have an entertainment lawyer look over it and have them explain to you what the terms are.

Sometimes, it will be your benefit to sign, but that won’t always be the case. It’s in your best interest to make decisions that allow you to advance your career in the way you seeing it take shape. 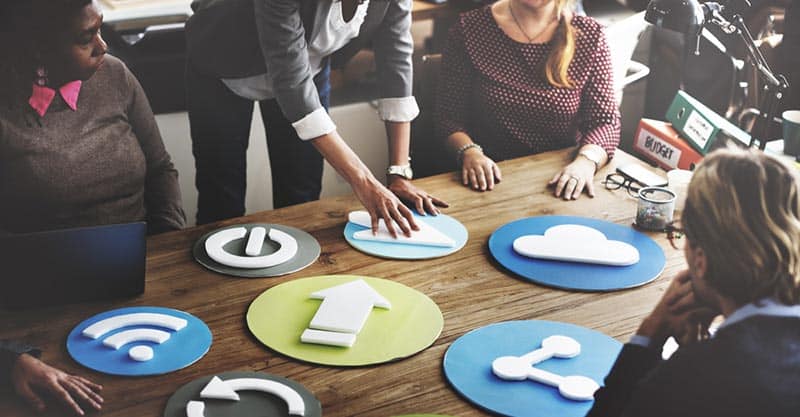 I’ve shared about how much advance record labels give before. So, if you’re curious how an advance works, how much you can get and how it should be used, refer to that guide.

And, most labels probably have more money than you do. So, they can hire the best talent (or the people most suited to helping you make your album).

This should also speak to a label’s clout in terms of connections. Generally, they are well connected and have access to people you might not otherwise be able to work with.

Even if you’re doing well as an independent artist, you might not be able to do what a label can do for you with their funding power.

Again, because labels are well connected, they can help you reach a worldwide audience quickly.

This tends to go hand in hand with funding, as this is what allows them to help you get publicity, radio airplay, media attention, advertising, playlist placements and more.

Labels already know some of the most talented people in their fields and know who to call when they need to draw attention to a new artist or release.

Now, arguably, large labels are not as agile as independent artists, and once a marketing campaign is in motion, aiming the fired bullet becomes nearly impossible. Once the machine is moving, there’s basically no stopping it.

When there isn’t a machine backing you, you’re free to reallocate ad money, pursue certain media coverage instead of other coverage, determine your tour stops and more.

But if you don’t know where to put your energy, you could be just as ineffective as a poorly aimed label campaign.

So, we can’t argue that labels offer some amazing marketing opportunities utilizing the connections and the engine they’ve worked hard to create.

A music career can be complicated. I would argue that it’s often needlessly complicated, but the fact still stands.

Because a label is familiar with all the legalities of necessary partnerships, they can navigate this area and offer specialist support to ensure your t’s are crossed and your i’s are dotted.

Labels are competent at tracking, collecting and distributing royalties for all involved – artists, producers and copyright holders.

We can’t forget, of course, that signed artists are typically the last to be paid. So, this doesn’t mean much unless you’re raking in the dough.

But this is the type of detailed grunt work that many musicians dread and having someone else handle it is frankly a godsend.

And, further, you can rest assured knowing that your affairs are in order and not have to deal with confusing agreements and their terms. 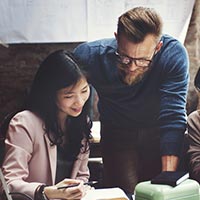 Labels used to be in complete control of how music was spread. Since the internet, that is no longer the case.

With that in mind, labels can help with both physical and digital distribution of your release to ensure maximum revenue and exposure.

Now, digital distribution is easier than ever, and if you’re an independent artist you can sign up with a service like CD Baby or TuneCore to get your release on all major streaming platforms and online stores.

And, physical distribution isn’t as big of a deal as it used to be. But if a label sees an opportunity, and they need to get your music out to specific stores, guaranteed they can hook you up.

Further, there are services like Ingrooves that don’t just offer global and physical distribution, but marketing, sync licensing, video monetization services, reporting and analytics and more.

So, you can expect a label’s distribution strategy to be more in-depth and comprehensive, especially if they determine that they can exploit your release in more ways for maximum profit.

With this deal in place, the distributor would pay for an album’s manufacturing costs, and then recoup their expenses form record sales.

With the growth of streaming and digital downloads, this has become a less significant part of a label’s offering.

This is a little different from music licensing, which is where various companies and media creators utilize your music in their works in exchange for fees owed to you.

If you are the composer of a song, you have licensing rights. When your music is played or performed publicly (radio, streaming, etc.), you are entitled to royalties.

A record label may choose to license your music by purchasing the rights to it. Then, they will act as your label for the music they licensed in the specific territory they licensed the album in. 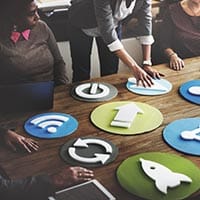 What do recruiters look for in an employee? The right fit.

And, that’s the same thing you should look for in a record label you’re thinking about signing with.

Sure, there are other details that are important too – what percentage of revenue the label will keep, how they plan to exploit your music, how they intend to brand and market your music and the like.

But if the label doesn’t get you and what you’re all about, the remaining criteria are almost unimportant.

For instance, Frank Sinatra was an amazing jazz artist. But it wouldn’t make sense for him to be signed by a label like CandyRat Records. CandyRat is largely known for acoustic guitar instrumental music.

Wires can get crossed, and at times you can be presented with the wrong deal. Or, you might end up pursuing a deal with a label that has no idea how to handle you but are nevertheless willing to work with you.

If you run into a situation like that, take pause. Think carefully about the deal. Get an entertainment lawyer to review the terms.

If you aren’t closely aligned with the label’s vision, and they aren’t sure what to do with you, the best thing you can do is walk away from the deal and seek representation elsewhere.

Do We Even Need Record Labels?

It’s fair to say there’s a fair bit of confusion around what labels do and if what they offer is indeed beneficial to artists.

People see the artists front and center but don’t always see what’s going on behind the curtain.

Some well-known artists have struck out on their own because of their ability to build and maintain a fan base without label assistance.

And, the same opportunity is available to anyone with the skills and smarts to pull it off.

With that in mind, labels have had to reexamine and rethink their existence to remain relevant.

And, with that has come better contracts for artists, who sometimes get to enjoy a larger share of the royalties than the label, some retaining rights to their music and more.

As independent artists, it’s altogether too easy to take for granted what happens “behind the scenes”. But having people work for you while you’re busy doing other things can be a massive advantage.

Especially in the case of labels, who have experienced marketing and press teams, radio pluggers, accounts departments and more.

Now, it’s entirely possible to build your own team.

But do you want to spend a ton of time seeking out talented, experienced folk? Do you want to foot the bill for said team? Do you want to educate them on who you are and what your music is about (because you will need to do that for them to be effective)?

For some artists, this is the right move. But for many others, it will prove to be too much work and too much of a risk besides.

What Record Labels Do, Conclusion

Labels do have their place. And, if they continue to rethink their role as the music industry evolves, I foresee a better time for artists ahead.

Again, as I mentioned at the outset, using a record label it’s not an either/or situation. It’s more of a good fit/bad fit situation.

Certainly, many artists desiring a record contract will never be presented with one. But even if you are handed a contract, it may not be the right one. Things must align for it to work out in your favor.

Now that you know what labels do, hopefully you have a greater appreciation for the work they take on and how they can help you.