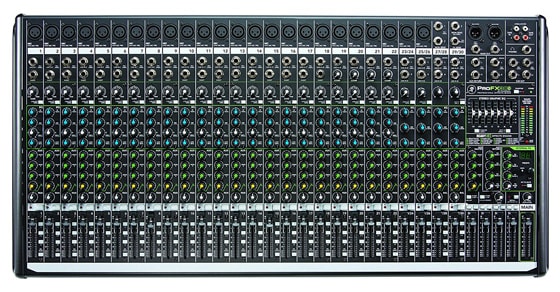 Mixing music is an art form as much as it is a science.

It often requires both theory and practical knowledge as well as experience, creativity and intuition to achieve the perfect mix. A pair of good ears helps too.

But even then, the “perfect mix” isn’t set in stone, because it’s entirely subjective. A mix that sounds good to one pair of ears may irritate another. Stylistic and genre-specific preferences can also apply.

When it comes to mixing, there are few things more important than your gear. It isn’t even necessarily about the quality of gear you use as much as it is how well you know and understand it, and whether it inspires you creatively.

To me, workflow is of utmost importance. I don’t like interfaces with unnecessary inefficiencies I can’t work around or alter. You might value functionality, effects, or preamps and sound quality over workflow. So, it’s critical that you choose the right board for you, because they all offer something a little different.

Here are five studio mixers for under $1,000 that are worth a look. One of them could be exactly what you’ve been looking for. 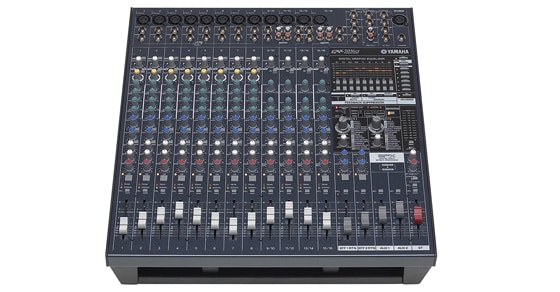 As with the Mackie, the Yamaha EMX5016CF could work both as a live or studio mixer. It has 16 inputs with up to 12 XLR and four stereo, dual built-in digital effects processors, eight mono inputs with single knob compression, and nine-band stereo digital graphic EQ.

Yamaha is known for creating quality products, and all customer reviews connected to this console are positive.

Overall, it’s a quality mixer for a good price. You can also get a 14-channel version on sale, so it’s worth comparing.

Some buyers seem to feel this product does not live up to the Mackie name, which has become synonymous with quality sound gear, but they seem to be in the minority. 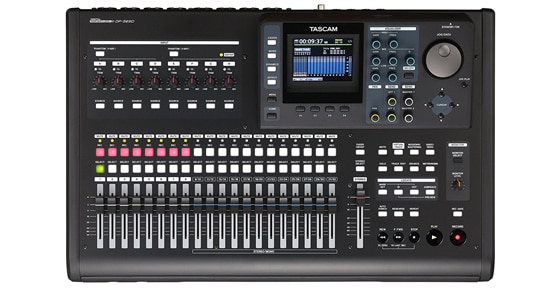 The Tascam DP-32SD is a 32-track digital recorder with an integrated 40-input mixer for mixing down the 32 playback tracks with eight inputs for bouncing. With it, you can record up to eight tracks simultaneously.

This is the ideal unit for beginner studio enthusiasts. It’s intuitive and easy to use, has nice-sounding preamps built in, and doesn’t require a lot of sophisticated setup work. And, as the name suggests, you could potentially take it anywhere with you to capture sounds in different environments.

Additionally, the Tascam is the cheapest on this list, making it a great entry-point mixer for those just beginning to explore the possibilities of recorded sound. 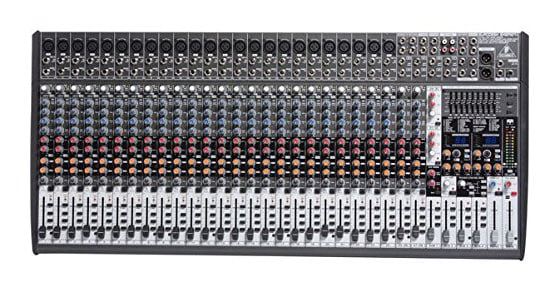 Analog sounds better than digital… If you’re of that opinion, you might find the Behringer Eurodesk quite appealing.

With Behringer, you essentially get what you pay for. For a 24-channel board this comes at a fair price. The build quality may not be perfect, but if you handle it with care, it should last you a while. 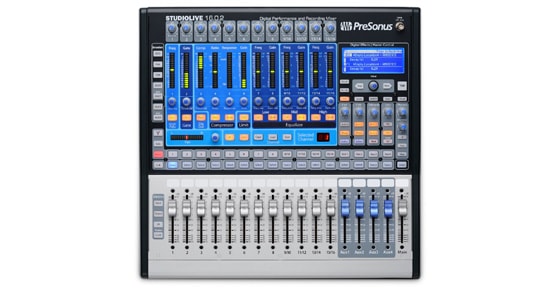 The StudioLIve also comes with PreSonus Studio One Artist DAW, and can also be controlled with the use of an iPad or iPhone.

This PreSonus unit is a largely respected choice so worth comparing with others, but the main downside of it appears to be that the build quality could be better. Note: If you’re willing to spend more than $1,000, you can also pick up a 24 or 32-channel version of the same mixer.

What Should I Look For In A Studio Mixer?

It depends on who you ask.

But these are some of the elements I would consider when looking at what mixer to buy.

The best mixer in the world quickly turns into a problem when it breaks down two months after you’ve purchased it. Even with mixers featured on this list, some customers have had this issue.

So, you need to be thinking about how you’re going to be using the mixer. Will you be taking it on the road? Will you be using it for mobile recording purposes? Or, will it sit stationary in your studio? You need to buy a mixer that suits your purpose.

And, just because you take good care of it doesn’t mean it will last forever, but it can make a difference.

Some engineers like built-in effects, while others prefer to use outboard effects. This is both a matter of taste and budgetary considerations. Rackmount effects units may sound amazing, but they can also run you a pretty penny. Effects quality can also vary from one console to another.

If you aren’t sure what you need, most boards mentioned on this list have the basics, such as reverb and delay, covered. It should be more than enough to begin the process of experimentation.

Also, if you’re planning to record using a digital audio workstation (DAW), they usually have effects plugins built in, too.

This mostly depends on how many channels you intend to record simultaneously. For instance, you could purchase a more affordable two-channel audio interface if you don’t think you’ll be tracking drums, and you mostly plan to overdub and track one instrument at a time. Some engineers like to use 12, or even 24 inputs just for drums.

This is also an important consideration when it comes to mixing. The more instruments you track, the more channels you’ll ultimately need to mix. If your board has any limitations as to the number of tracks you can record before the mix is full, you’ll end up needing to bounce tracks. This gives you less control over the mix.

Fortunately, with today’s DAW and software solutions, it’s become easier than ever to bypass this problem entirely. 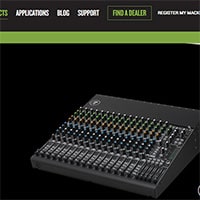 As I said before, to me workflow is everything. I don’t like inefficiencies in studio gear. This means the interface should be intuitive and easy to use. I shouldn’t have to menu-surf for days just to apply an effect to a chosen track, for instance.

Some people care more about features than ease of use, so they may dedicate more time to learning and understanding their gear than I would be inclined to. They work around the weaknesses of the console by making repetitive processes their strength.

Professional studio engineers usually aren’t looking for an all-in-one solution. Hence, they are less likely to be concerned with effects or the quality of built-in console effects. So, in their minds, the mixer itself should only do one thing well – mix!

You must decide that’s right for you. But if you’re new to mixing, then you’ll probably want to start with a mixer that doesn’t get in the way of your creative flow.

A Price You Can Afford

Buying the best studio mixer on the market might save you some time – but it sure isn’t going to save you any money.

It’s best to be realistic with your budget, especially if you’re buying a mixer for the first time. You’re probably going to end up buying other pieces of gear for your studio, possibly even immediately, so paying for more console than your bank can handle isn’t going to do you any favors.

Is the mixer compatible with the gear you’re planning to use it with?

There are many approaches to recording. Hardware-based, software-based, or a mix of the two. And within those broadly defined options are many gradients in between.

If you want to use your mixer with a specific DAW, you should find out whether it’s compatible with it. You shouldn’t have any issues with basic gear like cables, microphones, or even instruments, but getting software to talk to hardware (and vice versa) can sometimes be a challenge.

There can be compatibility issues with Mac or PC products as well. These instances are relatively rare these days, but may be something you need to look out for (i.e. make sure the piece of gear you’re buying works with your type of computer).

Also, the specs of your computer can play into things. An underpowered machine can be a serious issue when you’re connecting different pieces of hardware to it, and even if you aren’t, can cause a lot of slowdown and crashing.

When Looking For The A Good Quality Studio Mixer Should I Buy An Analog Or Digital Console? 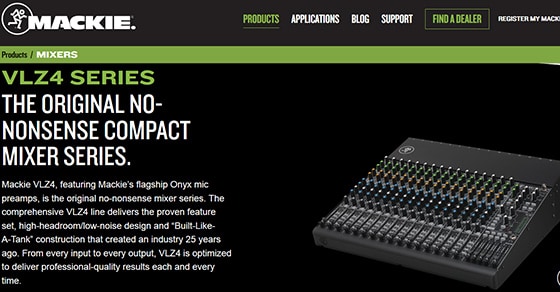 I’m sure this debate will rage on for years, if not decades to come.

Some people love the “warmth” of analog gear. Others don’t mind the polished, pristine sound that digital gear can deliver.

In the end, there is no right answer, and it mostly comes down to preference. What do you like more?

Also keep in mind that your other gear – whether digital or analog – will have an impact on your mixes too.

If you have a bigger budget, then you might consider furnishing your studio with as many options as possible.

Are There Any DAW-Specific Mixers Or Control Surfaces?

The short answer is “yes”.

You can also find mixers and control surfaces that work with a variety of DAWs and computer based setups.

For instance, if you’re using Avid Pro Tools (as most studios are these days), you can also purchase Avid designed consoles to complement your software.

Mixing can be done without a mixer – you can do it completely within your DAW. But many engineers still prefer the ability to push faders and dial in tones directly from their console.

So, your decision to purchase a mixer could depend on your preferences. You can do all your mixing with a keyboard and a mouse – but you might like the touch and feel of a mixer, and find it more intuitive to use.

What Do You Mean When You Say It’s Not About The Quality Of The Gear As Much As How Well You Know It?

You may have a hard time believing this, but some of the world’s most trusted and accomplished studio engineers still use gear that’s a decade – if not several decades – old.

Once you have a setup that works and gets you the results you’re looking for, there is absolutely no need to change it or invest in more.

A “working software setup” used to be a bit of a big deal, even five to 10 years ago. People sometimes bought a dedicated studio machine, connected all their gear, got their DAW setup, and then never connected the computer to the internet again. OS and software updates could “break” your setup, leaving you unable to recover until further updates or patches came along. And even then, new issues could come up. I haven’t encountered this problem in years, but it’s a good thing to be aware of.

Anyway, the point is that if you know how to get a good sound using your setup, there isn’t necessarily any reason to swap out one piece of gear for another.

Take your time and do your research. There is no reason to rush into a purchase. For smaller personal projects, even a four to eight channel mixer can be a good starting point. But if you want to start recording and mixing bands, you may end up needing as many inputs as your budget allows.

This isn’t to suggest you can do a lot with eight to 16 channels. I’ve participated in projects where the drums were recorded with a single mic, and sounded amazing. It depends on how scrappy you are.