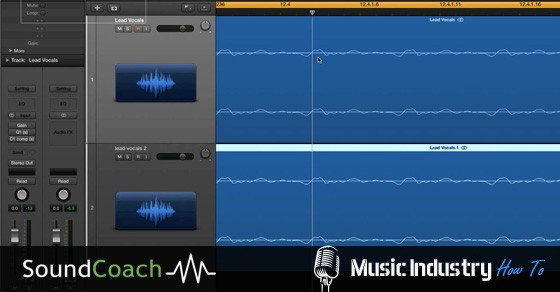 This is a guest post by the charming Kevin over at The Sound Coach. Taken from his video looking at what phase is, and how to fix phase related issues. Enjoy. 🙂

Hi guys and welcome to Start To Mix episode number Four, this is Kevin at thesoundcoach.com here to talk to you today about Phase. We are looking at phase issues, how phase issues can arise and how we can solve them.

Now what is phase? Actually phase is the high road to getting your sound right. It is the number one way you can completely destroy your sound or make it the best possible sound you are going to get. Get phase right and you will get good sound.

And why is that? Let’s look at some waveform, shall we? So what is phase and what exactly do I mean by phase issues? As we all know, sound exists in waveforms, these are two waveforms I’ve imported here from a lead vocal of a mix I recently did. It’s basically exactly the same waveform, this is just for practical purposes, so I can demonstrate some phase problems that might arise for you.

Now what happens if something goes out-of-phase? Let me just quickly add the second track here, enable game plug-in and invert the phase for, in this case both the left and right channel. So that it is actually perfectly out-of-phase.

Now what will happen is basically that the sound that was coming from the first vocal will be completely negated, obliterated by the inverted sample from the second right now. So we won’t hear anything basically, and let me demonstrate that to you. Isn’t that beautiful? Just to show you that it’s, I’m not lying, this is actually two vocals, I’m going to disable the plug-in.

And now enable it in the middle of the vocal sample. See, vocal has just completely disappeared. That’s because if I enable this, it’s going completely out-of-phase. That’s how powerful phase is, and that’s exactly why you need to pay so much attention to it. If it’s perfectly out-of-phase, everything is going to disappear now. Obviously not always – practically, in a practical situation, in a practical recording, you will never encounter something that is perfectly out-of-phase or almost never, but what you might encounter is the following. 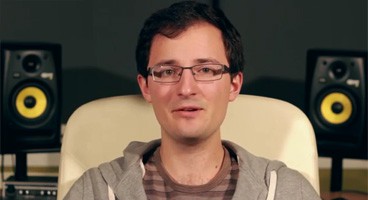 You might have a first vocal recorded and then the second vocal where the vocalist was just a little bit further or it might be two guitar microphones that are spaced apart, and you might encounter something like this, or this. And that would mean that two phase signals are not aligned, see where it’s going up right here, it’s only going up right here. And that might seem like a very small difference, this is only milliseconds but nonetheless this is audible. Let me just show you again by listening to what it sounds right now. See what a difference that was, can hear the phaser effect going on.

Let me just reset that and get it back aligned, so listen to it aligned. So that was aligned. And now this aligned again. See how we are losing fatness, how we are losing quality in the vocal. That’s because in the second vocal where the phase is misaligned, it’s actually substracting the qualities of this second vocal from the first one. So you’re actually losing potential for sound. And that’s something that you have to watch out for, because it has the possibility to completely ruin your sound. So correcting phase is very, very important.

So when and where do phase problems arise? Phase is the number one thing you have to worry about when you are working with multi-miked recordings. For example, guitar amps, they are often recorded with two or even more mikes, one mike up close to the amp, just to get some sparkle and another one to get more room tone or some lower tones. Not getting phase right at this point will destroy the guitar sound completely.

Another example, vocals. Vocalists doing double takes, they might be at separate positions, they might be a little bit closer or a little bit further from the mike the second time around they sing it. And there you can have some phase issues. Another thing about vocalist is that they tend to move around a lot. It’s not that easy for a vocalist to just stay still with their head and sing while at the same time expressing their emotions very good. Basically the same is true for any multi-miked instrument or anything that has a double take in it. Editor’s note, as you can see, this site is full of great music production tips :).

There is one more place where phase issues can arise, and that’s when EQ’ing. An equalizer can cause phase differences. Anyway, we’ll look at that when we’re talking about EQ, so I’m not going to delve too much into that right now, but just bear in mind if you are EQ’ing, you have to watch out for phase. And there is a simple solution, it’s called the Linear Phase EQ, but we’ll look about that in another video.

And now if you look at the spectrum, the frequency spectrum, where could phase issues be more prominent? Where is the best – actually a worst place to have a phase issue? And that’s in the lower end because the waveforms in the lower end are much longer than in the high-end. And it’s very easy for the lower ends to cancel each other out like that. So enough about how they can arise, let’s just look at how we can correct them.

So what can we do to correct phase? Suppose we have two signals from two mikes, how can we go about correcting phase? If you see that it’s mostly flipped, you can just enable again phase inverter or whatever plug-in you are using. That will work perfectly.

That will align phase for the most part, but if you want to go into a little bit more detail and it’s actually how I like to go about it, you have to nudge the regions around a little bit. I’m doing this in Logic by holding down Alt and moving it with my arrow keys. This way you can perfectly align the phase problems that you are seeing and get the best sound.

You can actually go into a lot of detail with this. You can do it for this part of the vocal, but then maybe in this part, you can see that, that snudge didn’t work so you just, you cut out a part here and you snudge it again in a different direction. And then you move through the entire vocal like that just to get everything aligned perfectly.

Now third method is simply, it’s a bit more destructive, it’s not something that I like to do to my audio files, but if you double-click it and go into the Audio Editor, you can go to Functions and Invert and that will just invert, completely flip the phase again as well.

So those are couple of methods that you can use to correct phase issues. Again what you use is completely up to you, different situations might call for different tactics, but for me I like to do it manually. That just gives me more control, and in the end gives me a better sound.

Now how can you detect if there is a phase issue? You can just by listening to it, you will be able to hear a bit of a phaser effect, if you’re familiar with the phaser effect. If you are a guitarist, you most likely are, but you can also just simply look at the waveforms in your DAW. You can see if the waveforms are aligned or not, it’s just really simple. But there is one best way for you to check phase even right now, and that’s just listening to your mix in mono. You have to keep in mind that you have to reference your mixes in mono and we’ll talk about that in a later video as well.

Now I’d like to finish this video off by just touching a little bit on when not to correct phase because phase is just such a powerful thing, that it can destroy your sound, sure, but a lot of great sounds have actually been made by purposely doing something, I’d say wrong with phase. They play with phase just to create a whole different sound. Anyway, that’s all subjective, that’s for you to decide what is the best sound I’m getting if I can play with phase. You might be correcting things, you might be deliberately not correcting it, that’s completely up to you.

You have to just remember to listen to what it sounds like. How does this sound? It’s the mantra I keep repeating, and I hope you’ve remembered it by now. I’m going to repeat it even more in the next videos and in the next articles on the website.

So just realize when there is phase cancellation going on, you might be missing out on a great sound or you might actually be making a great sound. So why don’t you make that a mission right now, try it out in your mix that you are doing right now, check for phase issues, see where you want to correct phase, see where you don’t want to correct phase, and check out what that does to your mix.

So I want to just take a little quick moment for you guys here at YouTube, if you are following me here on YouTube, following this series. I just want to give a quick shout out that there is a lot more information about different subjects, a lot of articles on the website as well, thesoundcoach.com. If you subscribe to the newsletter, you’ll get notified about three to four times a month, maybe about new content, new articles, new videos, great stuff.

Alright, I hope you enjoyed this video and a short explanation about what phase is, what it can do for your songs, and I hope to see you around in the next video where we’ll start moving around some faders. Bye.