You are here: Home / Getting And Performing Gigs / How To Look Cool On Stage With A Guitar – Tricks For Live Guitarists 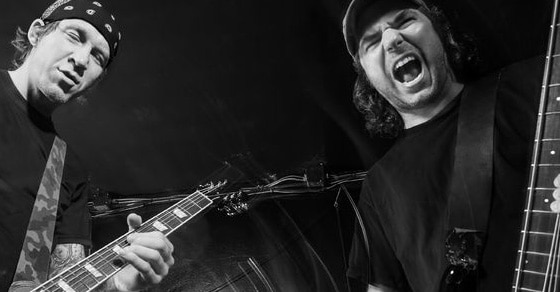 The guitar’s enduring popularity might have something to do with how it makes look one feel and appear in live performance.

Guitars are cool. They can turn through-and-through music geeks like Steve Vai and Joe Satriani into mysterious virtuosos and otherworldly aliens.

They can turn shy, introverted types like Jimi Hendrix into wild animals onstage.

And many other famous guitarists would be mere nerds, obsessive compulsives, self-involved jerks (or worse), without a guitar slung around them.

But a guitar alone doesn’t make you cool. Just getting up onstage and playing is boring. I’ve seen well-known, wildly popular bands do this, and it just isn’t right. You need stage presence.

You can play guitar without ever jumping up and down, swinging your arm like a windmill, duck walking across the stage, or titling your head back and looking way up into the stratosphere.

But unless you’re doing something particularly technically challenging, you should be moving and grooving with the music. You should be expressing the emotion of the song.

Here is how to look cool on stage with a guitar.

A Few Basic Tips Before Looking Cool On Stage

Before we get into specific tricks, let’s cover the basics. Here are a few things every guitarist should do:

Now let’s get into some tricks.

Find A Good Height For Your Guitar Strap

Guitarists like Jimmy Page tend to have really long guitar straps, and wear their guitar below their belt line.

This can look really cool, though it can be hard to pull off. You may find it challenging to play your guitar – especially technical parts – when your guitar is slung so low.

Regardless, this is something you can experiment with. If you don’t feel comfortable playing your guitar as low as Slash does, find a height that does feel right. That way, you’ll always be able to pull off your parts without any issue. Interestingly enough, some players do sacrifice their playing for looks, or vice versa.

It’s a really simple thing, but the height of your guitar can make a big difference. By the way, if you’re looking for more examples, check out The 30 Most Badass Guitarists of All Time.

Match Your Guitar With Your On Stage Attire 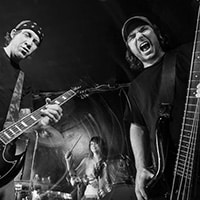 If you’re a businessman, and you’re putting on a suit, one of the basic guidelines is to match your belt to your shoes. For instance, if you’re wearing a brown belt, you should be wearing brown shoes too.

And while there are no hard-and-fast rules with guitar, you can do a little research of your own to see how rock stars have dressed through the ages. A Gibson Les Paul is a great looking guitar, and even a T-shirt and a pair of jeans can complement it well. On the other hand, Steve Clark’s tight black jeans and red scarf look is equally valid, if not more eye-catching.

It’s a really basic thing, but if your guitar clashes with your outfit, you won’t look quite as cool as you want to. Use your clothing and your guitar to bring out more of your personality – not less of it.

Play The Guitar With Your Teeth

Ever since Jimi Hendrix started doing a variety of tricks onstage, many other guitarists have been taking cues from him.

And he is definitely worth observing – from lighting his guitar on fire to sticking his tongue out while playing trills.

He was also known to play guitar with his teeth, and not only does it look cool, it’s quite impressive when you can pull off some sweet licks using your teeth as a pick.

But do be careful – the last thing you want is for your strings to snap. Strings do tend to hold up to a lot of abuse, but some bad things could happen if a string happens to break while you’re playing it with your teeth (ouch!).

Get On Your Knees

Is there a particularly emotional moment that you want to highlight in a song? Do you have a guitar solo that builds, builds, and builds some more until it explodes with intensity?

There are a lot of things you can do with your legs as a guitarist – just look at the likes of Angus Young, Chuck Berry or Eddie Van Halen – but a simple move that anyone can master is slowly getting down on their knees as the intensity of the music carries them.

This is good for dramatic effect and shouldn’t be overused. But if the emotional content of the music moves you, and you want to amp up the energy, it’s a good trick to have in your toolbox.

We’ve talked about some of the basics – how to look and feel comfortable onstage, and how you can enhance your personality.

And though there are many others, we’ve talked about a few tricks you can pull off in a pinch.

We’ve talked about a variety of different guitarists, how they present themselves onstage, and what stage moves they use to capture the audience.

The rest is up to you. You can arrange the pieces in any way you want. But I do recommend working with your band to deliberately create “moments” in your live performance. Don’t just hog the stage because you can – plan out who is going to do what and when.