You are here: Home / Getting And Performing Gigs / How To Get Music Gigs At Restaurants 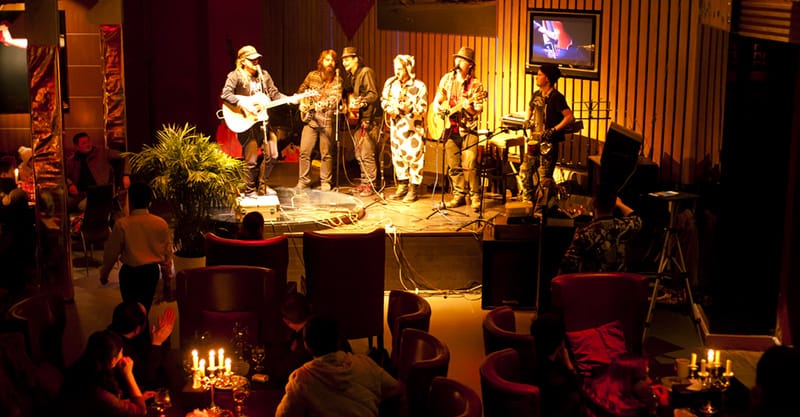 Playing gigs at restaurants is yet another way musicians and artists can make extra money with their musical abilities.

I started playing lounge piano type gigs when I was 17, and still do it today. It supplemented my income while I was in university, and it supplemented my diet as well – I always work a free meal into the deal!

Generally, you’ll be leaning heavily on covers when you play restaurants. That’s usually what restaurants want, and it is usually what patrons want to hear. That said, it’s totally possible to sneak originals in throughout the set to fill things out and play songs you care about.

Getting restaurant gigs can be tricky, as most of the good ones have a rotating crew of musicians who don’t like to give up their weekly gig.

In this guide, I’ll take you through how to present yourself as an appealing option for a restaurant, how to apply at a restaurant, what kinds of songs to play, and how to approach restaurants that don’t usually book musicians.

Making Yourself Appealing To Restaurants

To get the gig, you need to have an idea of what the restaurant is after, and present yourself as such. Here are some things to consider:

At this point, you don’t have the gig yet. All you have is a set list.

You can usually figure out what kind of music a restaurant wants by just being in the restaurant and observing the clientele. Some places appeal to an older crowd who would love hearing some classic rock and folk.

Other places appeal to a young, working, drinking crowd. The “popular kids”, so to speak. These restaurants probably want more modern covers, sung by someone who would fit in at their bar.

Of course, some bars and restaurants have an obvious schtick; a piano bar, a blues bar, a coffeehouse, etc. That makes it easy to know how to tailor your set.

When you are approaching a restaurant, bring them a set list that appeals to their demographic. In my opinion, you don’t need to know every song on the list, because you don’t have the gig yet.

If you get the gig, definitely go learn some of those songs.

Consider Whether You Need To Bring Gear To The Restaurant

Some restaurants/bars have regular live music, and thus have a small PA system, mics, stands, and cables.

Others expect you to bring all your own gear. Consider going and checking out the place before applying there. That way, you’ll know if you need to bring gear.

Having gear is certainly an asset, but I don’t think it’s standard to have to bring your own PA, so don’t worry about it if you don’t have that option.

If you do have gear, mention it!

Bring Samples Of Your Repertoire 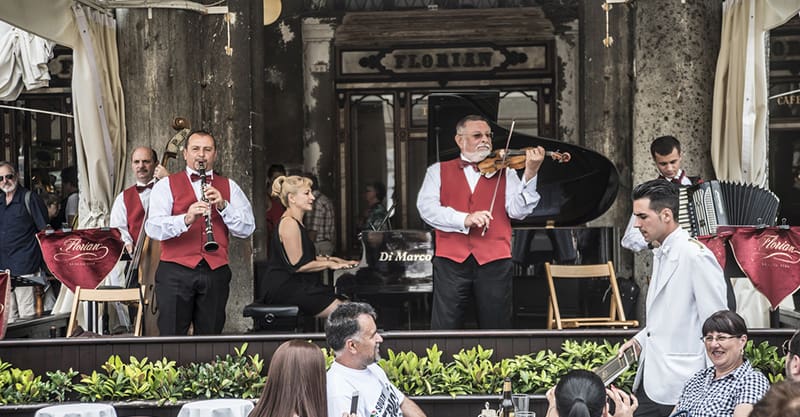 You may have a full promo package for your original act, but do you have a promo pack for your cover gigs? It may seem crazy, but it definitely helps if you do.

It doesn’t need to be complicated, but it should include:

They may want you to email this information, but just in case they prefer physical copies, put a couple packages in a manila envelope and have them ready.

It’s probably also worth giving away a copy of your original music (so long as it’s not super crass or rude) and maybe even throwing in a T-shirt if you feel comfortable doing so.

Dress Well, Show Up On Time & Be A Professional

You certainly don’t have to wear a suit and tie (in fact, you probably shouldn’t, that’s a weird vibe) but you should look nice and presentable. Nobody wants a disheveled looking, guitar wielding musician throwing off the ambiance in their bar.

It goes without saying, but showing up on time (or early) sets a good precedent for future gigs.

In case you’re going in without an appointment, always go to restaurants when they are not busy. For most places, this is between 2 PM to 4:30 PM.

If you go in to a restaurant in the middle of their lunch rush, they probably won’t give you the time of day.

Understand Your Value & Charge What You’re Worth

Don’t undersell yourself. If you have a great personality and a great set list, you can offer an amazing upgrade to the ambiance of a restaurant.

Play up the fact that if people are enjoying the music, they’ll probably stay for more drinks and food (which is often true).

If you take requests or are good at winging songs, let them know that as well. These are all great ways for the restaurant to make their money back off of you.

How To Apply To Play At A Restaurant

Most restaurants that have live music regularly have somebody working there that organizes the music every week. You can reach out to another artist that plays at that location, and request the organizer’s contact information.

Alternatively, just call the restaurants and ask to speak to whoever books the music. Some places prefer doing everything over email, which is fine. If you can do it in person or over the phone, that’s always preferable, as it gives the conversation a more personal touch.

Then, make an appointment to meet that person, and meet up.

Sometimes, you can simply walk into the restaurant and apply to play right then and there. In fact, this is how most restaurants are used to hiring servers and other staff, so it’s nothing to be afraid of.

Some places may ask you to play a song (which is always nerve wracking), so bring your guitar, or just bring some quality live video on a decent screen, like a laptop. 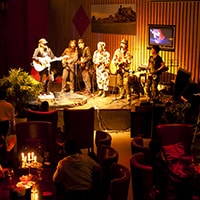 I had the experience recently of picking out some new tunes to play at restaurant gigs, learning them, playing them and have them flop.

All of the songs were great songs, and I performed them as well as any other song, but they still flopped. Why? They were too slow, sad, and unrecognizable.

I basically just picked some songs that I liked, and for whatever reason, they were all downers. They were mostly by popular artists, but it was all B-sides, so nobody knew them.

If you’re stuck for songs, here are some tips for picking a great set list:

Once you develop your first set list, you should be consistently adding to it. This keeps things interesting for you, the staff, and any repeat customers.

If you perform well, you’ll soon have people coming back every time you’re playing.

One of the best way to please repeat customers is by taking requests. If you don’t know the songs people ask for, write them down and learn them.

Approaching Restaurants That Don’t “Do Music”

Most restaurants don’t do music, and for some, that’s the right move. The restaurant might be super small or just not have the right vibe.

That said, there are many, many places that don’t book musicians simply because they’ve never thought about it, or are too overwhelmed to start down that track. This gives you an opportunity to generate a gig for yourself.

I have a good friend who now plays four restaurant gigs every week, and makes great money. He achieved this by approaching places that don’t usually have music, and convincing them that their business is improved by live music.

Here’s how he did it:

Start Playing For Less Money, With An Agreement To Increase The Pay If The Night Goes Well

When approaching a new restaurant, he would usually play for half his normal rate, just to show them what live music could do for them.

Of course, he’s a very talented performer and he had a great set list. His set list was so good that he could usually read the crowd and literally have them stay for extra drinks, just to hear him play.

If it works, the restaurant will happily have you back regularly and pay whatever rate you ask for.

Make It Easy For Them 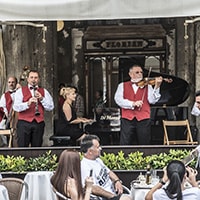 If the restaurant does not have a PA, and you have a small, portable system, just use that. You can eventually charge more for bringing your own sound, and they’ll be happy to have avoided buying gear.

Have a suggested format and a suggested day for your gig. Know in advance if you want to play two or three sets, what day works best, and already have a rate/budget made out for the gig.

Approach The Restaurant As One Would With Any Other Service

Just send an email, call them, or show up in person. Ask to speak to management about the potential for live music in the restaurant.

Gather References & Support For Your Show

My friend was so successful getting gigs partially because he had glowing references from other restaurants.

He was also very smart, and got the other restaurants to provide him with sales reports that showed increased sales on nights he was playing.

There is no better way to convince a restauranteur of having live music than proving they’ll sell more food and drinks.

Bring Out A Few Tables Of Friends

When you’re just starting, do some light promotion for the show.

You obviously don’t want to promote a restaurant gig as though you were doing a headlining CD release, but a quick post on social media and a few texts to friends will be helpful.

If you can bring out a couple tables the first few times you play, the restaurant will at least have made enough money on you to pay your rate, and they’ll be very happy for it.

Have Fun & Entertain! Ways To Get Restaurant Gigs For Musicians Conclusion

Playing background gigs is different from playing original gigs. You are there to entertain and keep people happy.

At times, this can be discouraging, but don’t let it get you down, just have fun with it.

If you’ve ever seen a great entertainer play a restaurant show, you’ll know how much fun it can be for the audience.

Try to emulate that, and have fun working on your performance skills.

Also take comfort knowing that every show you play does make you better. You’ll gradually get better at talking to crowds, singing to unreceptive crowds, and reading a crowd’s desires.

These are all critical skills, and they are only developed through practice!