You are here: Home / Guitar / Best Speed Exercises For Guitar, & Using A Metronome To Practice 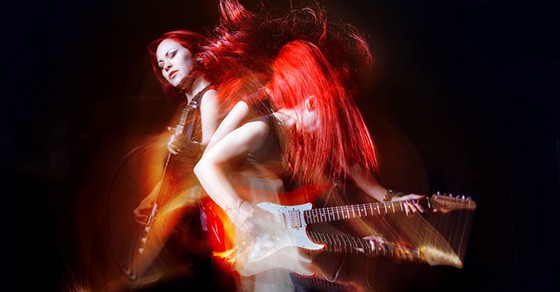 Many guitarists are interested in building up their speed. It’s cool when you can pull it off, but the work you need to put in to get there isn’t necessarily glamorous.

For the most part, it just requires persistence and diligence. Whether it’s sweep picking or speed picking, you must keep at it until you improve. You must pay attention to good technique too, but aside from that, it’s just work.

So, the good news is that anyone can learn to play fast. The only downside being that you must be consistent in your practice routine, even when you don’t feel like you’re improving.

Using A Metronome To Practice

Playing with a metronome isn’t exactly a blast. But it makes it easy to measure progress, and it also hones your rhythmic sensibility and technique.

So, when you start at a tempo like 50 or 60 bpm (or lower) and work your way up to a tempo like 200 or 210 bpm (or higher), you’re sure to find some “discomfort zones” in there. That’s a good thing, because it means there’s room for improvement.

A metronome, by the way, is simply a device that clicks at equal intervals. Those clicks represent beats in music. If you’ve got a smartphone, you don’t even need to buy a physical metronome anymore. There are apps you can download for free.

When you’re looking to build up your speed, I would advise you to practice with a metronome, period. Ready to get going? Then strap yourself in for a long ride, because that’s what it’s going to take.

When it comes to speed drills and finger exercises, there are different streams of thinking. Some teachers feel practicing chromatic scales can improve your technique. Other players feel it’s important to focus on “musical” exercises only.

I can’t tell you what’s right for you, but in this guide, we’ll stick to examples that have practical application built in.

The G major scale is made up of the following notes: G, A, B, C, D, E, F#. It’s a lot like the C major scale, with the main difference being that it contains an F#.

The following example takes you through the scale in three octaves, and the path up is different from the path down.

What makes this example practical is that, whenever you’re soloing or playing lead guitar, you’re going to be playing out of a scale, period. This scale contains most of the required movements you’ll ever be executing. So, if you start at a nice slow tempo and build up to faster tempos, your lead guitar chops will improve. 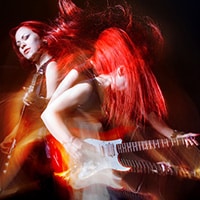 Your fluency with a scale will increase when you play it many ways, and not just one way.

In this section, I’m going to show you a few different ways to practice the A minor pentatonic scale (A, C, D, E, G). There is a theoretical basis for most of these patterns, but we don’t need to get into that right now. After all, we’re talking about building speed.

First, we’ll just play the scale up and down the neck as we normally would. This can get boring after a while, though that’s true of any speed drill.

The point is to burn the scale into your muscle memory through repetition. And when I say repetition, I mean hundreds of times.

Here’s pattern one (don’t forget to play it backwards too):

Again, there’s nothing special about this exercise (you’re just going up and down the scale), but if you try it at slow tempos and then at faster tempos, you will stretch yourself and ability to play faster.

When you’re practicing, remember to increase the tempo in small increments – maybe 5 bpm or 10 bpm at a time. Then, spend a good amount of time getting comfortable at every tempo. Don’t just skip ahead – give it time! Also, keep in mind that your limitations will not be overcome overnight.

Here’s pattern two, which can be a bit of a finger-bender:

You should be able to get a little more leverage out of this exercise compared to the first. Keep in mind that you can shift the same exercise to any position (different keys) on the neck. You can also use any of the five pentatonic patterns! That gives you many variations to practice, and trust me you’re going to need it!

We’ll try something a little different to finish things off.

Developing your finger dexterity and flexibility is not a bad idea, even while you’re working on increasing your speed. After all, practicing the guitar is all a process of building muscle memory and finger strength.

So, the following example requires you to perform bigger stretches than the others. Depending on the length of your fingers and your comfort level on guitar, it may not prove to be too tough, but again playing it at various tempos will likely stretch you in some ways.

Give exercise four a try:

I’ve given you a few different examples to work on. My students will sometimes ask me if there is “more” to developing speed, and the simple answer is “practice and repetition.”

And like I was saying earlier, when I say repetition I don’t mean playing through the drills a couple of times. I mean mastering exercises at every tempo. You should be able to play them with accuracy and precision no matter the speed. If not, you’ve got more work to do.

If you want to find more exercises, that’s not a bad idea, but you’ll find most of them are just like the ones seen here. If you want to get into non-musical examples (i.e. chromatic scales), that’s fine too. But if you’re looking to master a scale, then try playing it in as many creative ways as you can come up with.