You are here: Home / Guitar / 8 Tips For Bringing Your Guitar On An Airplane, Hand Luggage Or Check It In? 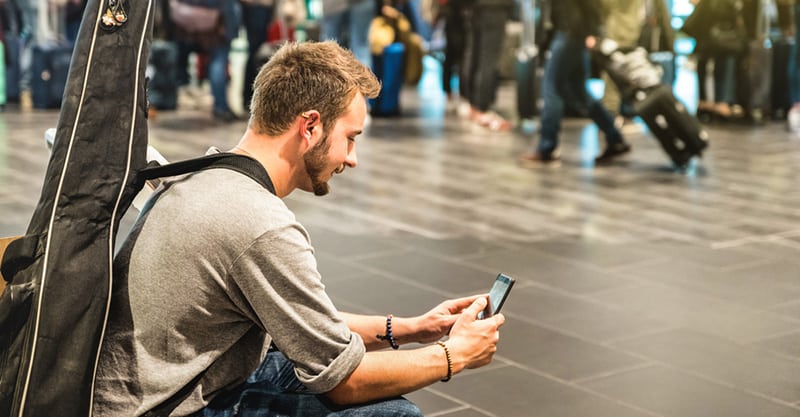 In the last few years, I haven’t done as much travelling as I did between 2011 and 2014 but I still made it out to Japan once and British Columbia multiple times.

When I was a teenager, my guitar used to go with me everywhere I went. And, if it’s not too much trouble, I will still bring it with me on my trips, though I’m not as insistent on that as I once was.

So, what’s one to do? Here are a few tips you may find helpful.

1. Hardshell Case vs. Gig Bag For Bringing Your Guitar On A Plane?

You might assume that a hardshell case is ideal for airplanes. That’s what I would have assumed too.

But as it turns out, both hardshell cases and gig bags have pros and cons. Here’s what you need to know:

A hardshell case is good for obvious reasons. It’s sturdy and built to protect your instrument. And, if you’re going to use a hardshell case, you should probably get a travel case specifically – an extra durable travel case at that.

A hardshell case, however, is more likely to be tagged for gate-checking. The staff may recommend that you check it in in advance of boarding the plane too (but you don’t have to, especially if you aren’t going on a small commuter flight – just play dumb).

A hardshell case is also bulkier. So, if you want to store it overhead or get the staff to put it in the coat closet, you might experience a little more pushback or reluctance.

You could always book an extra seat for your guitar, though that could be tough to negotiate financially.

You’d have to be crazy to bring your expensive guitar on an airplane in a gig bag, right?

Well, that’s not always the case.

A guitar in a gig bag tends to look a lot smaller than in a hardshell case. So, it’s less likely to be tagged for gate-checking, it has a better chance of fitting into an overhead compartment, and it could potentially fit into the coat closet, if the crew see it fit to put there (don’t be afraid to ask).

Basically, if you use a gig bag, you’re probably more likely to be able to take the guitar with you on the plane. That’s good, because your guitar will have to face the elements in the cargo hold.

Now, the major downside of a gig bag is that your guitar is going to be far more susceptible to damage. So, you’re going to have to be extra careful with it. On small commuter planes, there’s a good chance you won’t be able to take your guitar into the cabin, so beware.

2. Book A Seat At The Back Of The Plane

If you’re planning to bring a guitar on the plane, I am told that booking a seat at the rear is ideal. Here’s why:

People at the back of the plane generally get to board first. So, if you bring your guitar in, stow it away in the overheard compartment and sit down, you can let everyone else deal with what they must.

Note that this will make no difference if you’re on a small commuter flight. There’s a small chance the crew will let you store your guitar in the coat closet, but otherwise it’s going down in the cargo hold.

But as far as overhead storage goes, even though I see a lot of people use it, I tend not to use it that much. Some people bring on extra baggage on a plane, but certainly not all. In most cases, you should be able to stow away your guitar and leave enough room for everyone else. 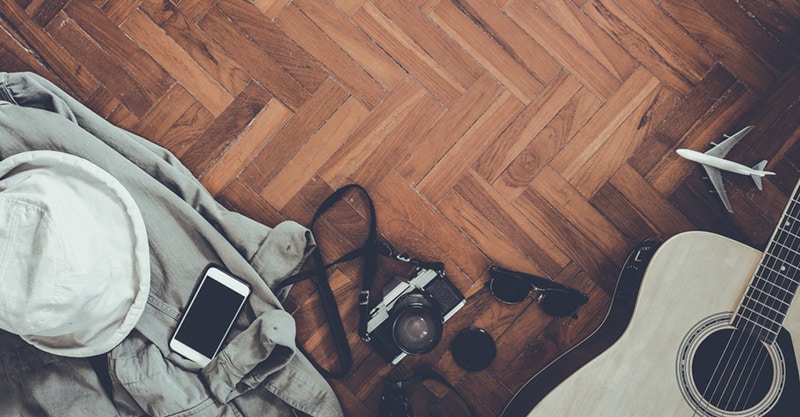 This is a precautionary measure more than anything.

How comfortable would you feel bringing your $3,000 Taylor acoustic on a plane, especially in the cargo hold? I know I would feel a little uneasy about that. You just never know what could happen.

These days, there are plenty of great guitars in the $400 range. It’s still a good chunk of change, but certainly not as much as you could pay for a quality guitar.

So, it might be in your best interest to purchase a guitar specifically for travel. That way, you won’t have to worry about taking your more expensive guitars on the plane. Even if it gets a little beat up, if it’s still functional, you’ll be able to soldier through your performance schedule or trip.

Now, don’t forget – if you don’t have a performance or recording schedule, you could always get a travel guitar instead of a full-sized guitar. We’ve covered a bunch of these in another guide, so if you’re just looking for a practice instrument, this might be the best way to go.

4. Find Out If The Guitar Makers Have Any Recommendations

Have you been told that the best way to bring a guitar on an airplane – particularly in the cargo hold – is to loosen the strings, add extra padding and use a hardshell case? I was told the same thing.

Now, when I brought my guitar to Mexico, I just ended up lucky all round. I didn’t bother with loosening strings on the way there (I did loosen them on the way back), I didn’t add extra padding, and although the case certainly qualified as “hardshell”, it wasn’t exactly sturdy. Fortunately, the guitar was fine.

The only thing that went wrong was that when I arrived back in Calgary to pick up my guitar, it didn’t come through baggage claim. The staff had to track it down for me. It took them a while, but fortunately, they managed to find it – I guess they were at least kind enough to set it aside from all the other luggage.

Again, I was lucky. But you might not be so lucky.

So, are the tips I mentioned good or bad? The answer is it depends.

It might be worth checking with your guitar maker to see if they have any recommendations for you. After all, they should know their guitars inside and out, and if there are any “tricks” to taking it on an airplane, they can probably tell you.

I can’t imagine too many scenarios in which loosening the strings or adding extra padding would be bad for the guitar. But you just never know. Better to be safe than sorry, especially if you have no choice but to bring an expensive guitar with you.

5. Research The Airlines, Can You Carry Guitars On Their Planes? 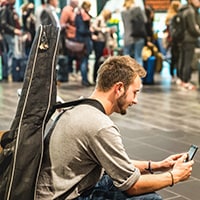 Now, you’ve already been told to bring your guitar on the plane as a carry-on, if possible, regardless of what you’re told. This is more of a hack than anything, and it won’t always work.

One way to ensure you can take your guitar on the plane as a carry-on is to research your options.

The following airlines are generally considered “guitar-friendly”, though that doesn’t mean they are always the best options (i.e. I don’t know about United):

The good news is that you can probably choose from many different airlines depending on where you’re going, ensuring that you find the best solution possible.

Regardless, knowing what kind of plane you’re going to be flying in can help you better determine how to pack your guitar and ensure its readiness.

6. Consider Your Budget For Travel

If you have a lot of money, then you could just book an extra seat on the plane and call it a day. You’ll have all the room you need for your guitar, and since you’ll be able to keep an eye on it, everything should go great.

As for whether to make it a carry-on item or luggage for the cargo, that’s going to vary depending on the flight. In some cases, you’re probably going to be strongly encouraged to check your guitar and may not be able to get away with hauling it onto the plane.

Not to worry, however, as there is usually plenty of information on flight carrier websites. So, you can always get a sense of what they suggest are best practices by perusing the information they provide you with. And, you should also be able to get a sense of cost.

In the end, your budget will probably only be a major consideration if bringing a guitar will mean paying extra money, or if you plan to book a second seat for it.

7. Ship Your Guitar Instead 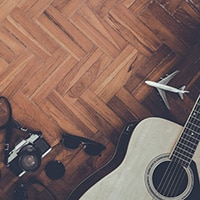 You may encounter situations where it’s impossible to bring your guitar on the plane. Or, maybe it just doesn’t seem like a good idea.

So, you could potentially have it shipped over to your destination.

There are some things to be aware of when shipping a guitar, however. Here’s what you should know:

Playing dumb could get you far. You might be able to “sneak” your guitar on the plane and plead ignorance. But in some instances, this won’t get you anywhere. So, don’t argue with staff. Be polite and respectful and submit to their requests.

Security is extra tight at airports, especially these days. Doing anything out of the ordinary could draw attention, and that’s the last thing you want. It’s one thing if your guitar ends up in the cargo hold – quite another if you’re forced to miss your flight because you’re being investigated.

Now, if an airline does a number on your guitar and isn’t willing to take responsibility, that’s a whole other matter. You can pursue legal action or do whatever else you feel is warranted in that scenario.

But as I explained earlier, when I arrived back in Calgary from my trip to Mexico, the staff couldn’t immediately find my guitar, and it wasn’t coming through the baggage claim conveyor belts either. If I had been rude in that situation, who knows what could have happened. Maybe they would have been a lot less willing to help me out. But I was patient and courteous to them (at least as much as I could be), and magically my guitar turned up. Go figure.

The airport is probably the wrong place to get angry, shout, and start arguments, in any country. And, in some countries the repercussions for such an action could be more severe.

I know you care about your guitar’s safety, and that is important. Just be cooperative with the staff to the extent that you can be.

How To Bring Your Guitar On An Airplane Conclusion

So can you bring your guitar on an airplane? Well yes, if you do it right.

If your travel is for pleasure, I’m going to suggest that a travel guitar is probably your best option. It will allow you to keep your fingers fit while you’re away from home, even if it doesn’t produce a sound, or doesn’t have the best tone in the world.

If your travel is for business, and you need a guitar for performance, recording or otherwise, then take extra steps to find out what you can do to ensure your guitar’s safety. Talk to the manufacturer of your guitar and case. Read the documentation provided by the airline. See if bringing your guitar as a carry-on is an option.