You are here: Home / Music Production / 17 Ways To Make Money With A Recording Studio 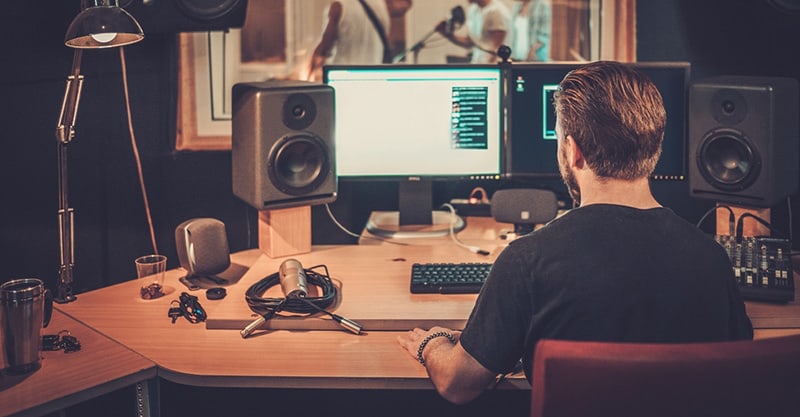 When it comes right down to it, there are a lot of ways to make money with a recording studio.

Many studios only think in terms of their flat hourly fee and don’t consider the many other opportunities that exist.

If you’re an upscale boutique studio with a large client base, maybe you don’t need to offer anything else.

But there are fewer barriers of entry to getting a quality recording than ever before. Many independent artists know all you need is a laptop, an audio interface and a decent microphone to capture quality sound.

Self-producing a single, EP, or album is still a challenge, but nowhere near as difficult as it used to be. Some people choose this route over spending hundreds and even thousands of dollars in a professional recording studio.

But if you’re looking for a way to “keep the lights on”, trust me when I say you don’t need to suffer in silence. There are plenty of services you can offer to supplement your income. It’s just a matter of what resources are available to you.

In this guide, I’m going to cover 17 ways you can make money with a recording studio.

The Primary Ways To Make Money With A Recording Studio

Here are the main ways to make money with your recording studio.

These revenue streams are common, but there might be a few you aren’t already leveraging, so it’s still worth going down the list.

Note: I’ll be covering a few more unconventional (but still viable) ways to make money from your studio later.

Look, I know you’ve got to keep those lights on, but if you aren’t offering to do pre-production and demo tracking work at a more affordable price tier than your standard hourly fee, you could be leaving some serious business on the table.

Most studios aren’t doing this, period. They just charge a flat rate for using their facilities. Fine, but what if I don’t need a professionally produced single, EP, or album just yet? What if I’m just looking to do demos or basic pre-production work so I can get a better idea of what I’m after?

Yeah, I could do it all from home, but it would also be cool to see the studio I’m going to be recording in, and get to know the people who work there. Know what I mean?

I don’t think there’s any studio that doesn’t do tracking.

This just means setting up the mics or connecting the instruments through a DI and hitting the “record” button. And for that alone, some studios command over $100 an hour. Not a bad deal for you.

I shouldn’t need to tell you that you should be making money tracking, but I figured I should touch on it anyway.

3. How To Make Money With A Recording Studio And Mixing

Again, most studios offer at least some basic mixing services.

Most musicians would much rather record and mix in the same facility than take their stems all over town.

Honing your mixing skills should prove relatively easy if you’re working with a lot of different clients. Nothing beats cold, hard experience.

And, in most cases, engineers are doing a bit of mixing as they track anyway.

Mastering is another common service offered by recording studios, but not all of them offer it.

Many musicians know it’s best if their mixing and mastering engineer are two different people, though sometimes they end up being one and the same.

If you have a team member that can master, or if you can learn how to do it yourself, you could potentially increase your studio’s monetization potential.

If you’re mixing, you’re already doing some editing work too. I get that.

What I’m suggesting here is a little different. I’m talking about editing radio shows, commercials, podcasts, and so on.

Offering this service could help you earn additional income, especially if you market it to the right audiences.

By the way, I would consider charging a little less for editing work, because it doesn’t always require that your client be onsite with you, and it’s a much easier task than mixing.

You love your Fender Rhodes, 1973 Marshall Mercury amp, 1967 Gibson Les Paul Standard, and other expensive vintage gear. You keep them under lock and key when you aren’t using them.

But renting out your equipment could still help you earn a lot of money. You’d still want to get insurance for anything you want to protect, of course.

I’m not saying you must rent out your best gear. But you might consider stocking up on gear that you’re comfortable renting out to those who need it. 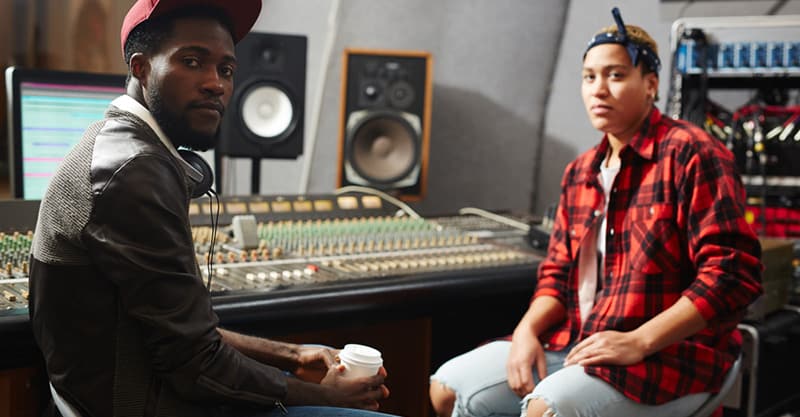 Your recording studio can easily turn into a rehearsal space when it’s not being used for tracking.

I know, I know. You spent a lot of time and money treating your rooms so you could get the best quality sound possible, especially when capturing voices and instruments with microphones.

But if you want to keep your studio busy and more money coming in, you might consider letting artists and bands rehearse in your studio environment for a lesser fee.

Maybe you’re a studio engineer or producer. Perhaps you can play a couple of instruments, even if you’re not the best in the world.

Don’t be hard on yourself. There will probably be plenty of players coming into the doors who don’t have the same experience or musical ideas that you do.

You could charge a little extra for contributing your talents to a couple of songs. It could be a lot of fun, and you’ll probably get credit for it too.

I’m not sure if you would call this a “missed opportunity”, but I think it’s fair to say it’s not something every studio owner is thinking about offering.

Plenty of singers and rappers need beats and backing tracks. And, if you’ve got a bit of free time in your schedule, you could be pumping out beats, building up your archive and selling them for additional revenue.

The popularity of EDM (Electronic Dance Music) is quite ubiquitous. So, whether it’s an EDM artist looking for a remix, or a rock band looking for an electronic remix of their hit single, there should be plenty of opportunity here.

If you don’t specialize in EDM, you might consider hiring an engineer who does, or learning how to make it yourself.

Additional Opportunities To Earn From Your A Recording Studio 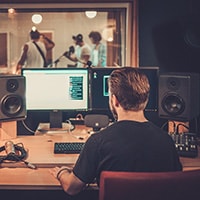 You’re a recording studio, so naturally, your primary focus would be recorded sound.

But if you’re honest with yourself, you’ll probably come to recognize there are some other ancillary opportunities staring back at you.

This isn’t to suggest you should take on anything and everything, but with recording equipment becoming more accessible, and making quality recordings becoming easier than ever, you may be hard pressed to book your studio full of recording clients who can now just as easily record from home.

If you’ve got the time, staffing and resources to take on more, here are some products and services you could offer through your studio.

A recording studio is generally a one-to-one style business, where you’re serving one client at a time. Certainly, if you’re working with a band, it’s more like one-to-three, or one-to-four, whatever the size of the band is. But it’s basically one entity offering its services to another entity.

By offering workshops and courses, you can easily create one-to-many opportunities for yourself. These generally pay more, because you can collect money from many people at once instead of just one (i.e. by selling tickets for the event).

Depending on what you’re good at, you could offer workshops and courses on:

Workshops could also be made into more formal “courses” that you package up and sell as DVDs or digital downloads.

How many artists comes to you asking about logos, graphics, and branding in general? My guess would be quite a lot.

Once musicians have finished recording their next release, the logical next step is to get their packaging and marketing in order.

Whether it’s a shiny logo or album artwork, there’s probably a high percentage of people coming into your studio that need some graphic work. If you can’t at least refer a skilled graphic designer and earn a finder’s fee off your work, you’re missing out on some money.

This goes hand in hand with graphic design.

If you’ve got a decent camera, you can capture some nice photos for your clients, and they will appreciate it too. I’m not suggesting that you become a professional photographer by any means, but it wouldn’t be a bad idea to work on your skills. 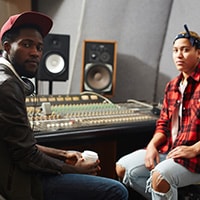 It has become increasingly common for recording studios to offer videography services.

From entrepreneurs and podcasters to musicians and YouTube personalities, there are plenty of people that need video.

And, of course, you could offer to film musicians tracking their album as it happens. You could help them create a “making of…” DVD or promotional video for their upcoming release.

Video is bigger and more important than ever, whether you’re a musician or business owner. So, video could be a huge money maker for you if you do it right.

There’s a good chance your recording studio has a website. Did you put it together yourself, or did you have a developer design it for you?

You probably know a thing or two about websites, because there’s a good chance you’re having to keep it updated yourself. Hiring a marketing company to post, update, and make changes to your site on your behalf can be quite expensive.

But even if you don’t know much, the tools have gotten so good today that building a website can be done quickly and easily without a lot of technical knowledge.

So, if you can develop a templated website theme and customize it for the artists that request it, you could make quite a bit of money for minimal effort.

Practically every smart musician, entrepreneur, or YouTube personality knows the importance of building a presence on social media.

If you know how to help people grow a following on social media, it’s a service you should consider offering – not just for the money you can make now, but also for the money you could make later – you could put clients on monthly retainers and build a recurring revenue stream for your studio.

Again, the people you’re working with generally need marketing. They have a book, a course, an album, a website, a show, or something else they want to share with the world.

It can be hard to know exactly what to charge for marketing. It’s worth doing a bit of homework to find out what various marketing companies are offering.

But if there’s one thing there will always be demand for, it’s marketing. Even though you can automate a lot of it, there still needs to be a human component for it to be effective.

Plus, whatever you learn through marketing and advertising for others can only benefit your business over the long haul.

The Best Ways To Make Money With A Recording Studio Conclusion

Are there monetization opportunities beyond the ones mentioned above?

I’m sure there are. What ideas can you come up with? Write them down, because you never know how they could impact your business down the line.

Many revenue streams can decrease your reliance on one. Though you should concentrate on two or three to begin with, once those are happening on autopilot, it may be a good idea to pursue more.