During any live band performance, you’ll find the drummer providing the beats from behind the rest of the band. The drummer is the band’s heartbeat, and it may be weird always to see them in the back of the stage. It’s not because drummers aren’t cool enough to be front and center, because drummers are amazing. There’s actually a very logical explanation.

Drummers are placed in the back of the stage due to their equipment being less mobile. One of the most common reasons is the sizeable bulky drum set is a little easier to set up and move when it’s in the back. Also, the sound from drums echoes off the back wall allowing it to be heard more easily across the room.

Reasons Why Drummers Are in The Back of the Stage

Drummers are placed in the back of the stage for a variety of reasons. Each reason helps the band perform some different sets and keeps the rhythm going.

Drum sets are placed at the back of any stage because they are not moveable. The pieces of a drum set are screwed together and are difficult to separate effortlessly. Placing them at the back of the stage can easily take off the stage and store quickly, rather than at the top of the stage.

Also, a drummer very rarely has a solo that would allow them to move around the stage. A drummer would not pick up an individual drum and move around the stage. Instead, when the drummer is highlighted, a spotlight usually shines on them and draws attention to their skills. This allows them to use the whole drum kit and have a solo!

For the other members of the band, a drum set can be challenging to get around. If a drum kit was placed at a different spot on the stage, it might be difficult for the performers to move around when they play or sing.

Drummers Are (Sadly) Seen as Accompanists

Drummers are seen as accompanists for most bands. This is because most drummers are not the lead singers or leading guitar players in the band. They are forced to be in the background so people can see the other people. These performers typically have big egos, which cause them to want to be front and center.

Drummers tend to have smaller egos and are more interested in making sure the music sounds alright. Sitting at the back of the stage allows them to focus on the sound and produce great music.

Listening to and sitting in the back of the stage requires humility and sound awareness. The drummer is unique in playing what sounds right in the moment according to what other people are playing. By sitting at the back of the stage, they hear the sounds the other musicians are making and choose what they will play.

Another reason why drums are placed in the back of the stage is that the acoustic sound bounces off the walls and amplifies the sound. This allows drums not to require microphones or other amplification materials, saving money and providing the song’s right sound.

By placing the drums at the back of the stage, the drums’ natural sound can be heard in the space. In fact, if placed in the front of the stage, the sound may be off and require unnatural amplification, which can change the song’s sound.

Sometimes a drummer’s personality will determine their drum kit placement on the stage. Some drummers are quieter and less attention-inducing than other musicians. This can cause them to feel more comfortable in the back of the stage and prefer to be out of the spotlight.

Of course, there are expectations to this rule, but drummers are known for having a pretty easy-going attitude and enjoy listening to the music’s flow. The back of the stage is an excellent place to do that.

Drums are an extremely loud instrument. When placed towards the front of the stage, the noise may overwhelm the other softer instruments. This can make the performance challenging to hear and cause the vocals to become soft and almost nonexistent.

Placing drums at the back of the stage allows the other sounds to rush forward and keep the drums slightly muted. The distance ensures that it will keep the lower-sounding drums from overwhelming the listener’s song and ear when the sound carries.

Sometimes drums will be placed behind a glass screen during performances. Audio Engineers will put the glass to help with the noise the drums produce. The glass will help muffle the drum sounds and allow the other instruments to be heard more clearly.

It is also important to note that when screens are used, another less hard element must be placed on it to absorb the sound. The shield acts as a place for sound to bounce back, but it will require a place to be absorbed.

Drummers also have the essential job of keeping time/rhythm for the rest of the band. By placing the drum kit in the back of the stage, all the other musicians can hear the time being kept by the drummer. This ensures the song(s) do not have riffs and will remain a cohesive unit.

It is also easy for the other musicians to hear the counting off’s of time and allow the drummer to be near the other instruments with a lower sound like the bass. The bass and the drums work hand in hand and ensure the time and rhythm are kept for everyone else.

One of the benefits of this is that the drum is such a loud instrument that the bass can create vibrations on the other musicians’ floor. This helps everyone keep in time and pay attention to riffs, even if they cannot hear the drumbeat.

Exceptions to Drummers Playing in the Back

There are always exceptions to these rules, and some bands have placed their drummers in different positions on the stage. Each band has another reason, but this is the most significant exception.

Sometimes the drummer will be one of the lead singers. In this case, the drum set is typically placed in the center of the stage at an angle everyone can see. This allows the audience to know the person singing and let their sound be as far forward as possible.

In different genres such as swing or jazz, the player might be placed here to sing the blues and keep time for all the other instruments loud and clear. The drum’s bass helps keep people on time, and they can all feel the vibration if they are placed in a more central location.

There are very few other reasons why the drummer would be placed in the front of the stage. Typically the only other reason would be for viewing purposes. Placing the drummer in the center may create symmetry on stage that might not be there otherwise.

Why Is the Drummer Always in The Back? Final Thoughts

Now that you have learned why the drummer is typically placed at the back of the stage, you can now decide if the back of the stage is the right place for you and your band. Each band is different, but you can help point out the benefits of performing from behind and have fantastic sets! 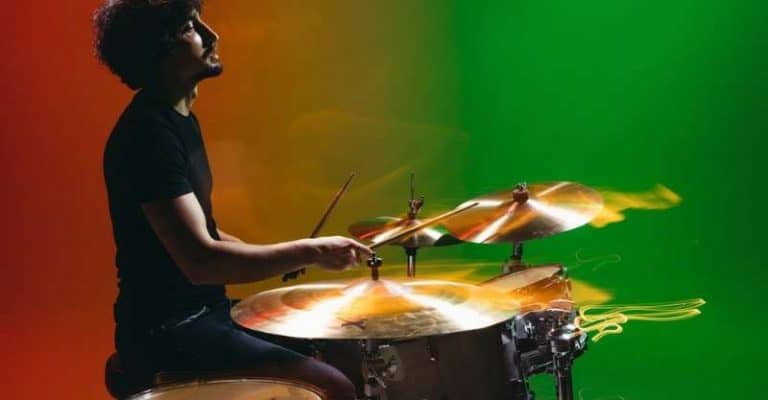 Many beginner drummers do not realize the importance of properly setting up their drum throne and drums. Not only will it make it easier to play the drums and create a better sound, but it is also beneficial for your health and wellness while playing. Comfort is key when it comes to drumming, and that… 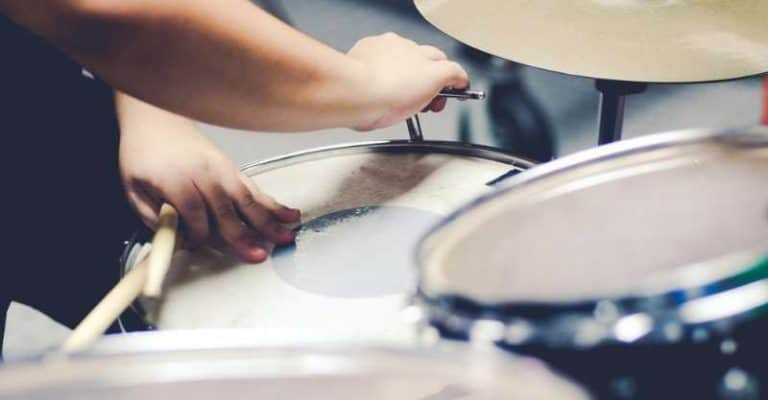 Drums like all other instruments need to be tuned. Since most of the sound is determined by the head, tuning a drum involves decreasing or increasing the tension in the head. To maintain a quality sound, you must regularly tune your drumheads, but exactly how often is regularly when it comes to tuning drumheads? Drumheads… 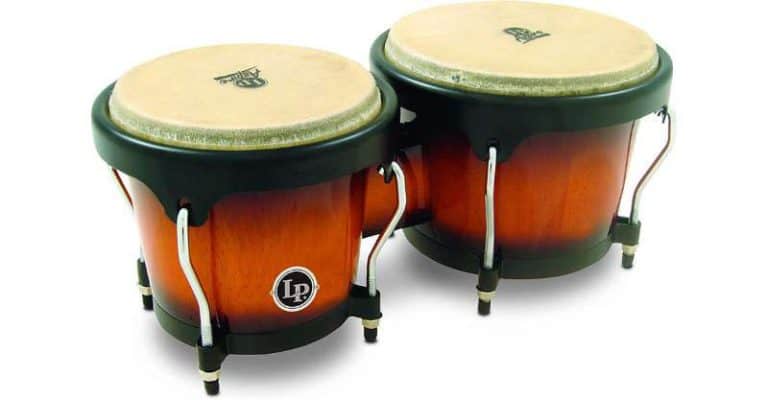 Joining a drum circle is an incredible experience that will offer you a fun time along with other benefits like stress relief and connection with others. The best thing about drum circles is that you don’t need to have any prior musical knowledge before joining one. Some drum circles require you to bring your own… 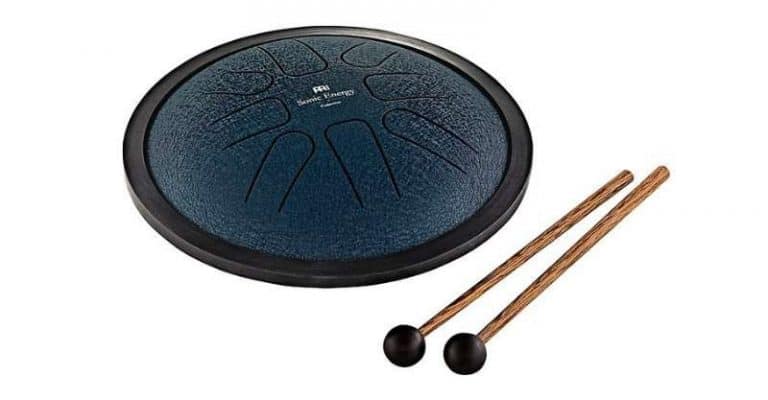 Tongue drums are amazing percussion instruments that allow you to play sweet and soothing melodies without needing to have much musical knowledge. You can use them in small percussion groups, or you can use them in meditative settings, such as yoga classes or music therapy. They’re like handpans in many ways, but they’re a lot… 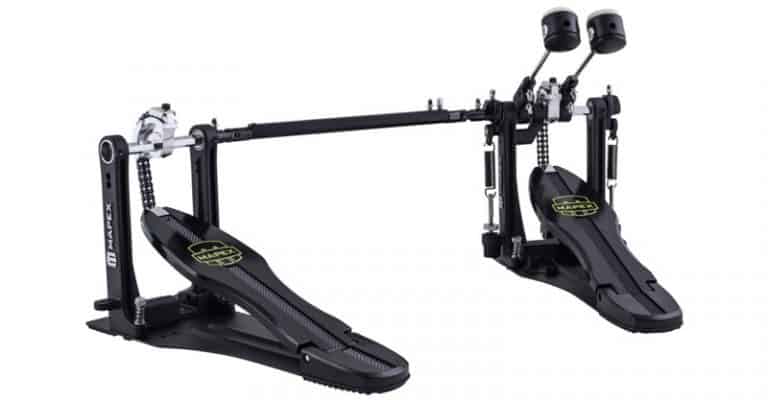 Looking to buy a new bass drum kick pedal? Well we share with you the best here today! Best Double Pedal ListTop Single Pedals For DrumCompare The Best Cheap Pedals On The Market We also show you what to look for when buying a new drum pedal, so look out for that below too. 🙂… 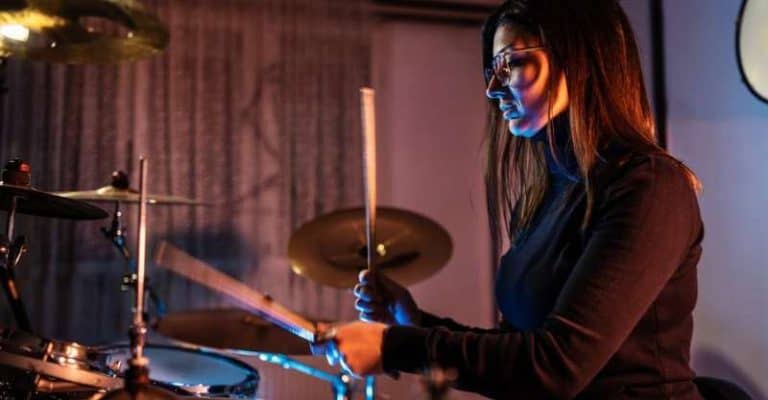 It is natural to want to excel in drumming. You listen to the greats and want to be like them. You want to be able to play complex rhythms and patterns with ease. Yet, to reach this goal, you need practice. You may often wonder how long you need to practice before you become great….