You are here: Home / Violin / Fiddle Vs Violin – What’s The Difference? 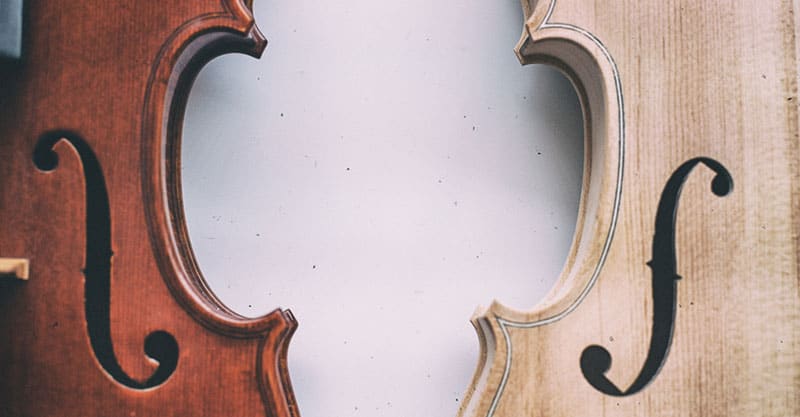 So, you want to know the difference between a fiddle and a violin.

As you are likely aware, there are many musical instruments in existence. In the past, some of these instruments were only used in specific situations.

These days, musicians are all about experimentation and will bring a variety of instruments into musical situations where they might be somewhat unexpected but are nevertheless effective.

Now, without saying too much about the popularity of violin and fiddle and what musical contexts they belong in (more on this later), what exactly is the difference?

You may have heard the terms being used interchangeably. Or, maybe you’ve only heard people refer to a violin as a “fiddle”, which is technically correct.

Let’s look more closely at the differences between these instruments.

Fiddle Vs Violin, The Easy Answer

For those who don’t require a long and detailed answer, here’s the concise version.

The easy answer is that violin and fiddle are the same instrument. Only, they are used in different musical situations.

A violin is used for classical or jazz. A fiddle is used in folk, country or bluegrass.

It’s essentially the same instrument being used for different musical styles and genres.

The more technical answer, which we’re about to get into, is that a “fiddle” could describe a multitude of stringed instruments.

Violin Vs Fiddle, The Complicated Answer

Now, we’re going to look at how violin and fiddle differ.

A technical answer isn’t necessarily required in this situation, and the debate doesn’t know a logical end.

But from what I understand, here’s a more specific look at the difference between violin and fiddle.

What Is A Violin?

Unless you haven’t gone to school, an orchestral concert or seen a violin at home (or at a friend’s house), you should be relatively familiar with it.

It’s often the first instrument we think of when we envision an orchestra. And, there is no doubt that the violin plays an important role in an orchestral setting.

But just in case, here’s an overview of what a violin is:

A violin is a wooden stringed instrument with four strings. It’s played with a horsehair bow and has a rounded body with f-shaped sound holes.

There are other instruments that come with f-shaped sound holes, including viola, cello, double bass and sometimes even guitar, which doesn’t technically belong in an orchestra.

The violin has a treble pitch, meaning the notes on the violin are pitched higher than other instruments already mentioned.

These are the basics of the violin, which is sometimes also called a “fiddle”. But to understand how that works, we also need to study what a fiddle is.

What Is A Fiddle? 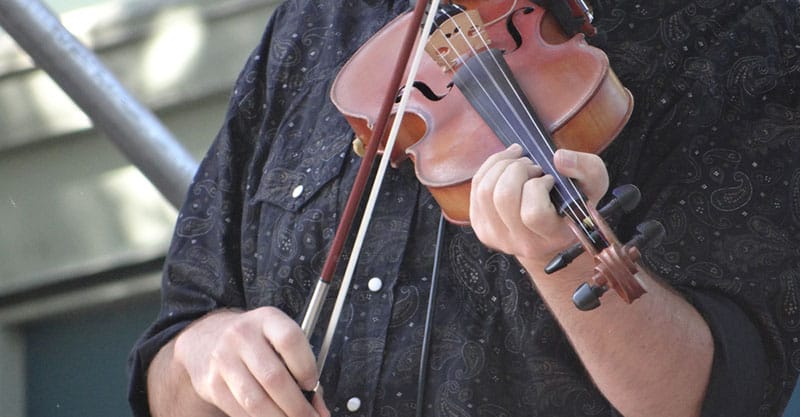 A fiddle is a generic term used to describe any stringed instrument played with a bow.

As you can imagine, that definition is broad, and can even include instruments like the North Indian sarangi, the rebab or the one-string goge of sub-Saharan Africa.

I’ve even heard people refer to a guitar as a “fiddle”, which is technically incorrect (because it isn’t usually played with a bow).

But those people also had a sense of humor, and to be fair, it wasn’t lost in translation – I knew that they were referring to my guitar.

“Fiddle” is also an affectionate term referring to a violin. Kind of like how a grandfather might call his grandson a “lad”.

But in Western Cultures, it’s safe to assume the term “fiddle” is being used to refer to an instrument used in Irish-Scottish-French traditional music, as well as Appalachian, bluegrass and Cajun music.

Many a violinist will tell you that these styles are considered less technical than classical music, though they sometimes require fast playing.

Another difference is that fiddlers are often called upon to create a rhythmic and melodic lift to get people dancing. So, the instrument serves a slightly different purpose in these musical contexts.

Where classical players are formally trained, fiddlers are often adept at improvisation.

Not that either a violinist or fiddler would be better or worse in a band situation, but all things being equal, a fiddler might be a better choice because they’ll be able to come up with ideas on the spot.

While there are some other nuances we could explore, such as musical genres and cultural differences, I think you get the basic idea.

A fiddle is a loose term that can define a variety of stringed instruments (those played with a bow) and is often associated with certain musical genres (folk, country and bluegrass).

Even with the explanation I just provided, you might still be confused as to how a violin differs from a fiddle.

But here’s the thing – even professional players don’t necessarily know whether they’re playing a violin or fiddle in a given moment.

They have many similarities, they even use many of the same tools.

Those differences and similarities tend to blur in live situations, especially where a violinist is called upon to play a variety of styles.

And, let’s face the facts – as musical genres continue to fuse and blend, these differences are only going to become more confusing and nuanced.

As far as I’m concerned, the fusion of genres is not a bad thing – I love hearing musical instruments being used in unique ways.

I also hearing a fusion of musical genres and styles – it can be exciting to hear instruments being used in ways they wouldn’t normally be used.

Is It Possible To Learn Violin Or Fiddle On My Own? 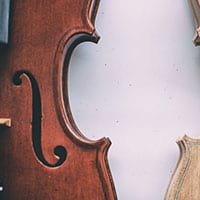 Undoubtedly, there are some instruments that you can learn on your own. People often say guitar and piano are good choices for absolute beginners.

And, there is an abundance of information and resources online that can help you learn to play an instrument. Some are even available for free.

But I consider self-taught virtuosos and prodigies a rarity. What I mean by that is that figuring everything out on your own is rarely a winning proposition. You can easily end up learning bad technique that stifles growth.

If I’m being honest with you, I don’t know how to play violin myself, so when it comes to answering this question, I trust the experts – the best way to learn is with the help of a skilled teacher.

Whether it’s going to school, taking courses or picking up a few books to learn from, an outside perspective is always welcome and valuable during the learning process.

And, the easiest way to get it right is to start with good habits – not try to cultivate them later.

How Long Does It Take To Learn To Play The Violin Or Fiddle?

As with most if not all instruments, the answer to this question depends on what level you aspire to.

If you want to be a pro, you’re going to spend a lot more time developing your skills than a hobbyist likely would.

So, if you just want to play for your own enjoyment, you probably won’t challenge yourself as much. Meanwhile, if you have greater aspirations, learning to play the way you want to be able to play will take longer.

As I mentioned earlier, violin is largely considered a difficult instrument to learn, usually requiring the help and guidance of an experienced teacher.

Unless you’re naturally gifted, your journey will be a struggle at times. But when you finally hit a right note after months and months of hitting wrong notes, you will also feel a deep sense of satisfaction.

And, don’t kid yourself – even naturally gifted musicians need to work at the craft to become virtuosos.

Another important factor is your overall determination and practice habits. If you spend more time practicing, you will improve faster.

As I discovered with my journey as a guitarist, if you’ve got the “eye of the tiger”, and you’ve made up your mind that nothing will stop you, you will naturally improve quicker.

After all, practice isn’t about counting the minutes or hours. If you enjoy the process, and truly want to improve, you should get lost in you’re practice sessions. Time will disappear.

This brings me to another important, related question, which is…

Do I Need To Start Playing Violin As A Child?

Now, learning an instrument isn’t exactly easy. If you stick to your practice routine and you’re constantly exploring new material and concepts, you should continually improve, regardless of what that pace is.

Pace can differ from one person to the next at the best of times, so that’s not a major factor.

And, while I may have given the impression that violin is a difficult instrument, that doesn’t mean you must start learning as a child.

Some people in adulthood learn how to play the violin incredibly fast, sometimes in a matter of months. I think it goes back to what I said earlier about the “eye of the tiger”.

Sometimes, there is an advantage to starting early, but not always. I’ve seen many young students struggle, and as result, lose interest in music altogether. That doesn’t foster a love of your instrument.

So, in the end, there is no one right answers here – you will take as long as you take, and even as you begin to feel comfortable on the instrument, you’ll realize there are always higher levels to aspire to.

What’s The Best Instrument For Me To Learn – Violin, Guitar Or Piano? 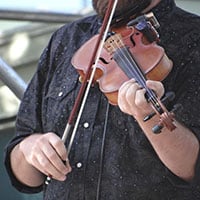 A lot of beginners seem preoccupied with what instrument to start on.

You’re going to have a lot of questions as a beginner. That’s normal.

But I wouldn’t advise spending too much time thinking about it. You’ll get caught up in analysis paralysis.

You can spend a lot of time collecting feedback and opinions. You can read blog posts and study personal experiences. You can listen to podcasts and watch videos.

Here’s the thing – ultimately, you’re not going to know until you get started.

Now, in case that sounds insensitive, let me offer the following.

So, if you just can’t make up your mind, it’s important that you give each a try.

And, you don’t need to spend an arm and a leg on this process either. All instruments, whether it’s guitar, piano, violin or otherwise, can be rented for a nominal fee.

In the case of piano, you’ll probably want to rent a keyboard or digital piano, mind you.

Truly, there’s no such thing as a “best” instrument, only what’s best for you.

For me, guitar is what sparked my interest in music. Prior to that, I’d played the triangle, tambourine, harmonica and recorder. And, while those were all fine, they didn’t give me the eye of the tiger.

If an instrument makes you feel like you’ve “found it”, that’s the one. Commit to practicing it every single day.

What Is The Difference Between Violin And Fiddle? Final Thoughts

Ultimately, I don’t think the difference between a violin and fiddle is something you need to fuss over. They are kind of the same thing, but not exactly.

A violin is a violin – but a fiddle is basically any and all stringed instruments that are played with a bow.

So, whether you’re playing a violin or fiddle, just have fun with it. Don’t worry too much about the technical details.

As I’ve often thought, the rules are there to be broken. Just be sure to learn the rules first so you know which ones you’re breaking!