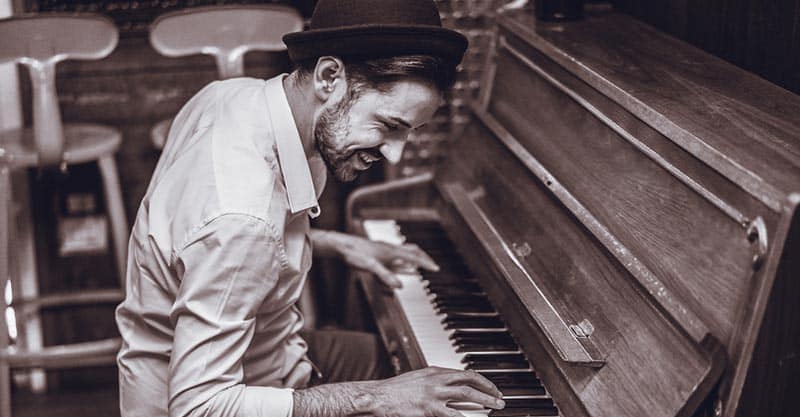 As a keyboard player, I often have conversations with people who tell me about their aunt or grandma who could pick melodies out of thin air and play it back to them.

I have always wanted to do this.

When I was a young player, I did not have much of an ear. I wasn’t great at reading sheet music either – it didn’t come easily to me.

But I now make most of my living playing keys, learn everything by ear and show up to the rehearsal/gig with everything memorized.

You can learn to play by ear!

What Is Ear Training?

When I was in music school, we had a class called “Ear Training”.

It was boring but it was also helpful.

You can begin training your ear at any stage in your piano playing.

If you’re just starting out, you can begin by picking out melodies to popular songs. Most modern melodies are fairly repetitive, fairly stepwise (meaning most of the notes are beside each other) and they are almost all right in the middle of the keyboard.

Ear training is an aspect of piano you can learn from home.

It gets a lot easier if you understand some basic harmony.

Knowing how to identify the key of the song and how to play every chord in that key is useful.

Today, I would like to take you through the process of learning a song by ear.

The more you do this the better you get at it. I’ve been working at ear training for years, and am only now at the point where I can pick out chord progressions without an instrument in front of me.

Listen To The Melody

The first step to learning a song by ear is listening to the song. And then listening to it again. And again.

Identify the melody. Don’t touch your piano yet.

Now, listen to a small section.

This is where you start. A small section of the melody.

Stop the music, and sing the melody to yourself. If you can sing it, you can play it!

Use a combination of listening to the section of melody and singing the melody to start picking around on your piano.

The smaller the sections you work on, the better. You’ll become frustrated otherwise.

Start in the middle of the keyboard, and don’t forget about the black keys.

Go section by section until you can play the whole melody.

Voila! You’ve learned a good chunk of the song.

Play The Melody Through With & Without The Song In The Background 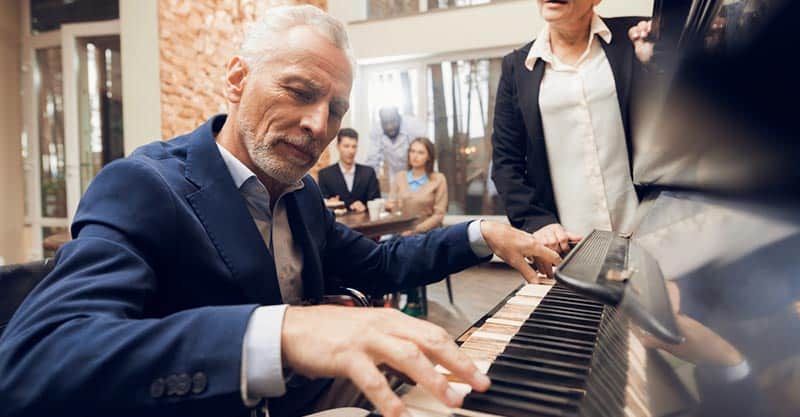 Start out by playing along to the song.

Once you’re feeling comfortable, play the song all the way through without the backing track.

Memorization is a huge part of learning by ear – not because you can go on auto-pilot – but because the more songs, melodies, and chord progression you learn and memorize, the more you’ll be able to pull from when learning new songs!

In whatever song you are learning, there is going to be a bass line or some sort of low frequency instrument holding down the roots.

The bass is not always playing the root notes of the chord progression, but it’s usually a good place to start.

Can you pick out the bass in a song? Listen for it!

Do the same thing you did with the melody; listen to the song a few times, then narrow your focus to just a section.

Use your left hand to start picking out notes in the bass line.

Once you’ve figured out the bass parts that work for most of the song, you can try the next step.

Put The Bass Notes & Melody Together

This part gets tricky, as you may have opposing rhythms in each hand.

Start simple. Just play the basic bass notes. Start with one note at a time, and just change notes on the beat.

Fill in the melody over top of the bass notes.

Start slowly. Much slower than the actual tempo of the song.

Gradually increase your tempo until you are playing the proper tempo of the song.

Again, here it will help to play along with the song at first, but your eventual goal is to play the song on your own. 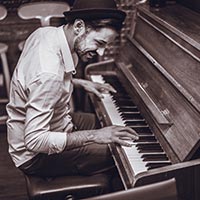 The next step is to figure out what the chord progression to the song is.

The easiest way to do this, is look to the bass notes that you’ve figured out, for clues.

If you figure out that the notes in the left hand are C, F, A and G, your best place to start would be seeing if you can put C major, F major, A minor and G major over the top.

If you can play those chords along with the song and it sounds good, then you’re probably playing in the key of C.

I often start with the major chords, because I find them easy to hear. They also give you a clue right away about the key – if you find three major chords in a song, then you have found the I, IV and V chord of a particular key.

The more you learn by ear, the more you’ll start to hear patterns and easily recognizable chord progressions.

The beauty of learning by ear is learning the ins and outs of different genres.

In funk, pop and soul, there will often be chords referred to as “slash chords”. These are chords over top of different bass notes.

For example, a V chord is often replaced with a IV chord with a V in the bass.

The more you learn by ear the easier these patterns will become to recognize – I’m at a point now where I’m able to quickly pick up songs, sometimes without even having an instrument in my hands. 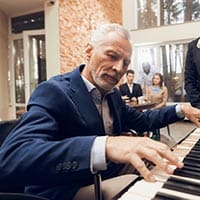 When I get hired for a gig and am given a list of 20 songs, here is how I go about learning them.

I always try to have them memorized, but I’ve also felt that if all I have are a few notes on a set list, that’s memorized enough for me.

Here is how I learn songs now:

That’s it! Generally, I have the song in a couple listens and everything else is just hammering it into my brain.

A few notes and I go to rehearsal. 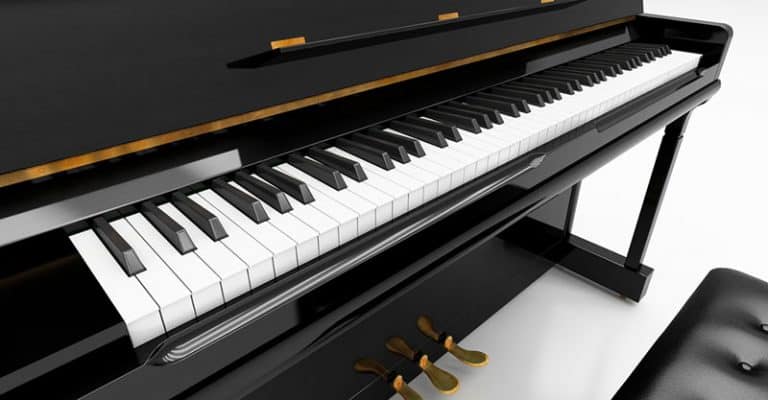 People often wonder, should I close the lid (or fallboard) to protect the keys on my piano? Well, the truth depends on your keys and your personal taste! In this guide, we will go over what the piano fallboard is, what it does, and whether you should keep it closed or open. The truth may… 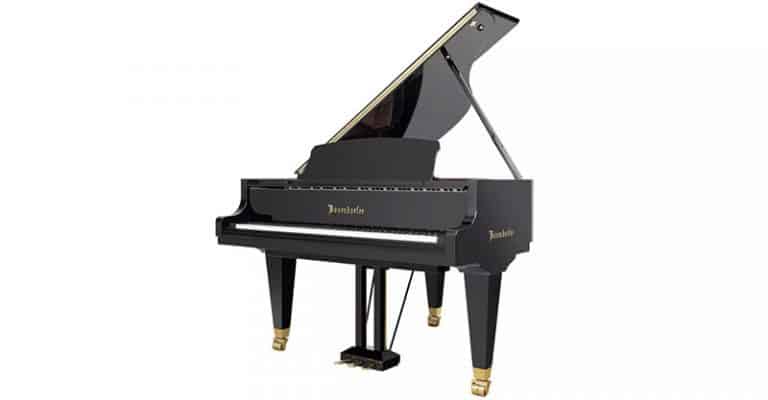 In the world of high-end pianos, only one brand is a household name the world over. Steinway is to pianos what the Kleenex brand is to tissues. They are almost interchangeable. There is good reason for this – according to figures collected by Steinway, over 98 percent of concert pianists choose to perform on their… 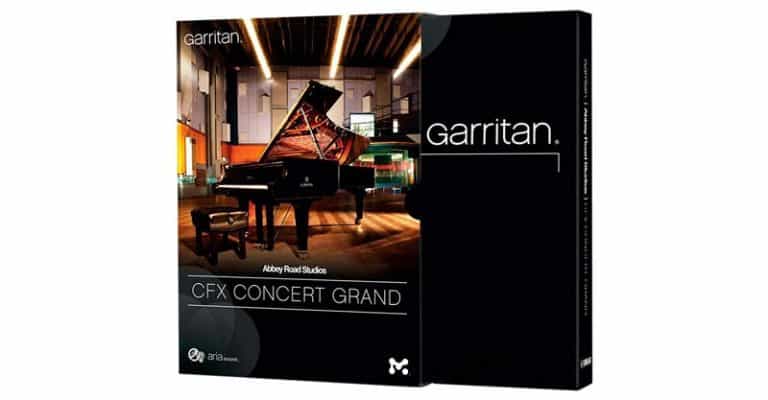 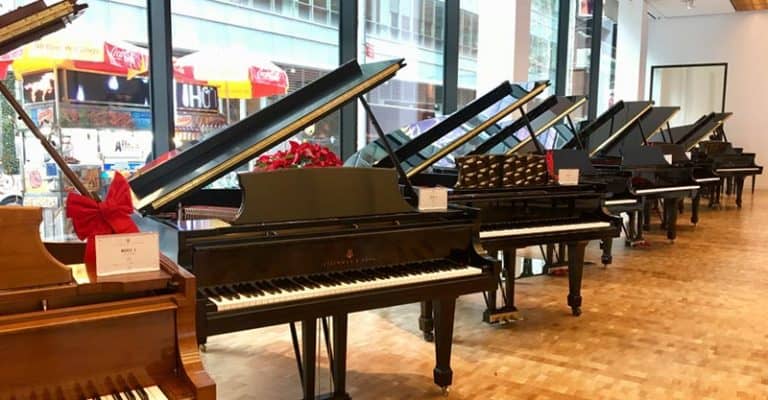 Owning a Steinway piano is a dream aimed for by many serious pianists. Steinways are world renowned for their quality and name. While they are not the most expensive pianos in the world, they are nevertheless quite pricey. Okay, super pricey. Luxury pianos like Fazioli and Bosendorfer will take the cake as far as price… 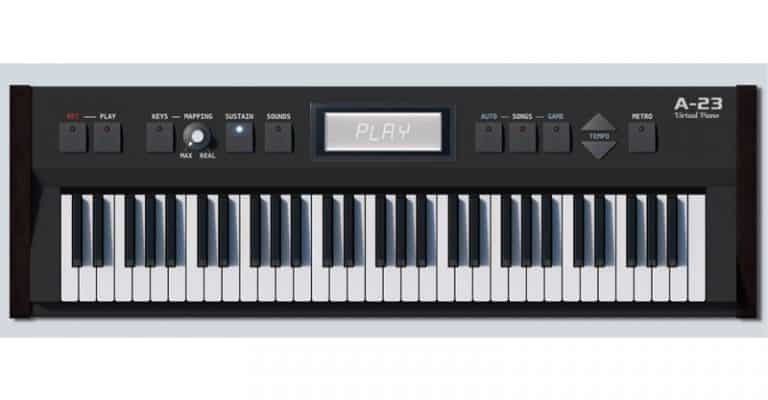 One of the hardest parts about practicing piano is that you must have a piano to practice on. Acoustic pianos are not portable, and even digital pianos are often bulky, heavy and expensive. While I was looking into this problem, I came across dozens of virtual, online pianos. These aren’t MIDI keyboards, they are typically… 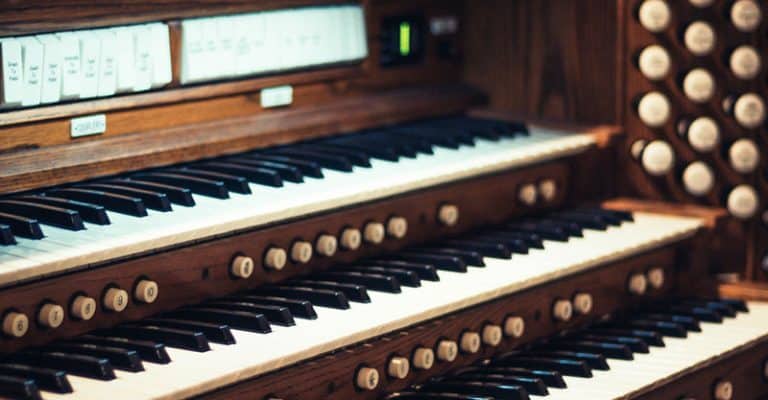 Learning to play piano opens up a whole world of keyboard instruments. Piano skills are transferrable to synthesisers, electric pianos, harpsichord, clavs, and organ. Most of these instruments are pretty similar to the piano – they all involved some sort of percussion on a string to make sound, except the synth and the organ. Synthesizers…