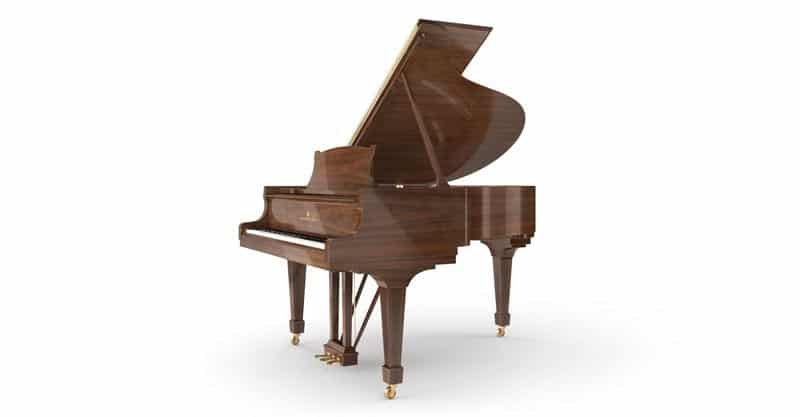 As far as instruments go, pianos are diverse.

There are few other instruments that range so widely in size, shape, sound and history.

From acoustic pianos to digital pianos to synths to spinets, it’s hard to know where to begin.

I’m going to give you a primer on the different kinds of pianos you might run into while you are researching what to buy.

Undoubtedly, I’ll miss a few, and for those who are interested, I’ve written a guide on the difference between keyboards, pianos, digital pianos and synthesizers. Check it out if you’re ever confused.

But here we will compare eight types of pianos. Let’s do it.

Concert Grand Pianos Are A Popular Type Of Piano 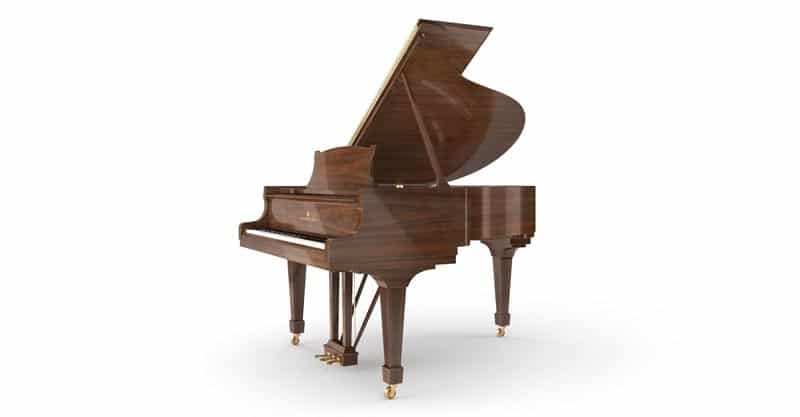 Owning and playing any sort of grand piano is a treat.

Owning or playing a concert piano is a privilege.

Few people own concert grand pianos because they are so large and expensive.

These pianos are usually found at performance venues, recital halls and universities.

When playing some of the world’s best piano music, these are the ideal piano. They have a powerful, full sound and great tone control.

The action on concert grands is especially notable – they are highly responsive (which allows better tonal and dynamic control) and have large soundboards and longer strings.

Grand pianos have a double escapement mechanism that allows players to play keys in rapid succession. You can repeat a note without having to fully lift the key.

This mechanism is only built into grand pianos, because it requires the strings to be laying horizontal.

While beautiful to look at and even nicer to play, concert grand pianos are exorbitantly expensive, because of how much work and craftsmanship goes into each one.

Steinways are the most popular and well known of the concert grand pianos, and a Model D will cost at least $171,000, brand new.

If you get a chance to play one, do it! It’s a special instrument. 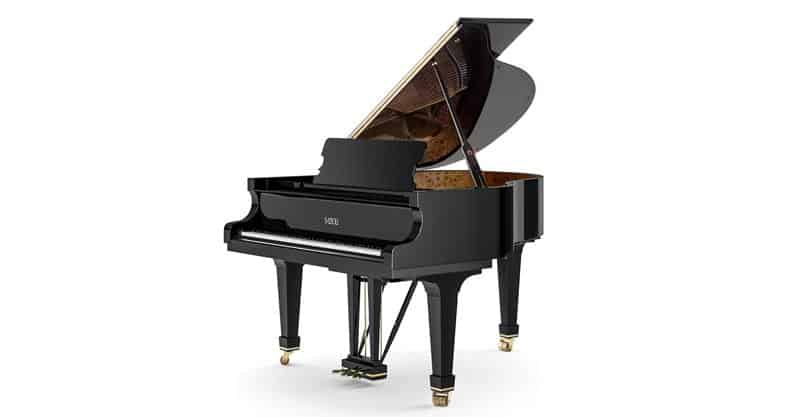 If you know somebody with a grand piano, they most likely own a baby grand piano.

Professional musicians and piano aficionados will save up to purchase a baby grand, as they are the next best thing to a concert grand.

You still get the wonderful action, responsiveness, big sound and tone, but the price tag and real estate is much more palatable.

They are like a concert grand in every way except their size. They are usually between five and seven feet long. Anything under seven feet three inches is a baby grand piano.

Baby grand pianos don’t generate the same tone as a concert grand, because the strings are shorter and the soundboard is smaller.

If the baby grand is a budget piano, they are often made with cheaper wood as well.

Sometimes, a nice upright piano can sound better than a baby grand, but generally the baby grand is better.

Baby grands have one huge leg up on upright pianos: the action.

Like concert grands, the strings lay horizontal, which allows you to repeat a note without fully lifting the key – allowing you to play more complex music.

All of the major piano makers like Steinway, Fazioli, Bosendorfer and Yamaha make baby grands.

There are also budget brands that make baby grand pianos, like Chang, Howard and Young. 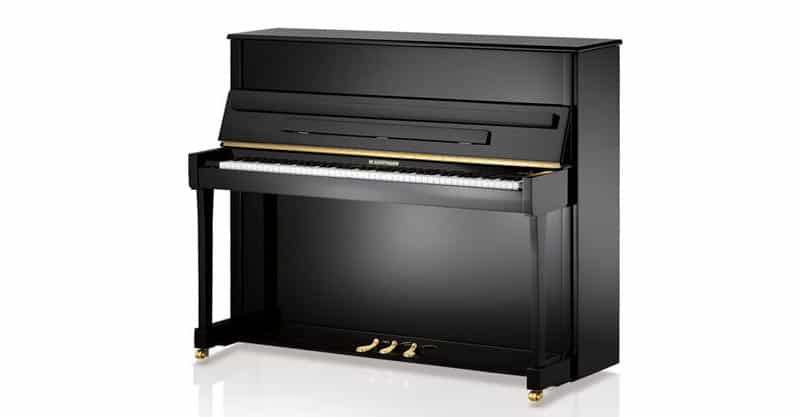 Upright pianos are one of the most common types of acoustic pianos you’ll find.

Churches, schools and homes all have upright pianos.

But they are vertical, meaning you can conveniently place the piano beside a wall to save on space.

The strings in an upright piano are placed vertically behind the keys, which is what makes them so tall. The soundboard is quite large, again, making the upright piano tall.

A good upright piano can sound absolutely beautiful. The only thing it’s missing is the action.

Because of the vertical placement of the strings, upright pianos have a slower, softer action. This makes them a little harder to play.

Newer, high-end upright pianos have magnets built-in that allow you to achieve similar action to a grand piano and play notes twice without fully releasing them.

All upright pianos will have a mute pedal and a damper pedal.

These pianos can cost a couple thousand dollars, or tens of thousands of dollars. Not as much as baby grands, but still expensive.

For this reason, most people don’t buy new. Upright pianos are easy to find, and you can often get good deals on nice pianos, because people have had them in their family for years and sometimes need them gone.

Console/Apartment Size Pianos Is A Compact Type Of Piano

Console pianos are sometimes called apartment pianos. They are the most common of all acoustic pianos, because they are the smallest. Coming in around 44”, they can fit in most apartments and homes.

They are smaller upright pianos and are popular because they have a nice, full sound.

Console pianos have similar feel and action to upright pianos.

Console pianos are traditionally acoustic pianos, with strings behind the keys and hammers, but you can also buy console-style digital pianos.

Console-style digital pianos are not portable. They look much like an acoustic console piano and have their own stands and built-in speakers. 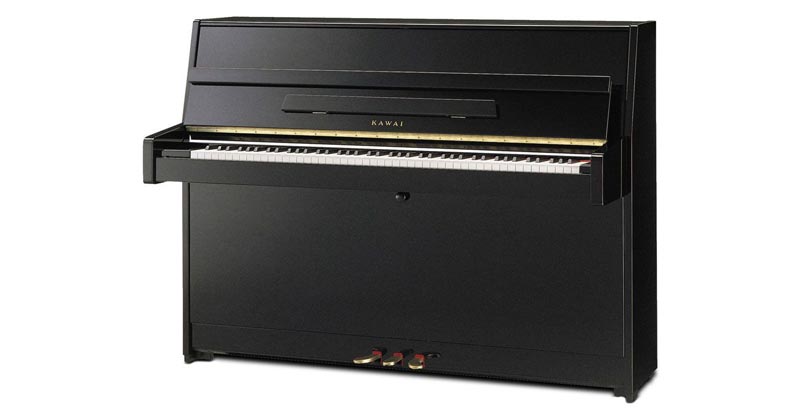 And here is a digital console piano: 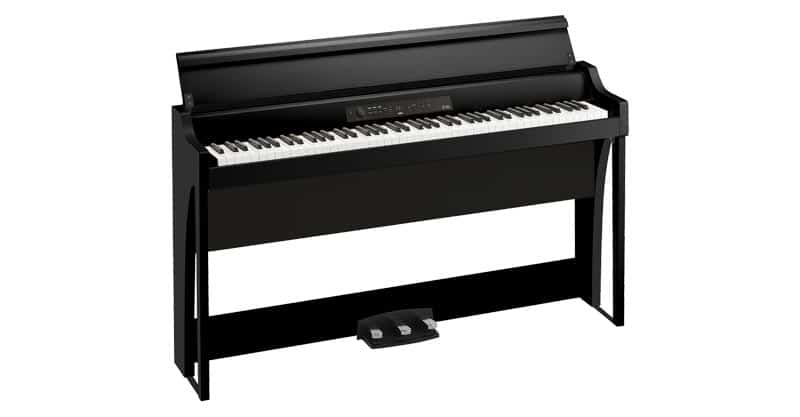 If you’re looking for an instrument that will easily fit in your home or apartment, look to a console piano. They sound great, look great and they are usually cheaper than upright pianos!

You can often find these pianos on the used market as well, and if you’re willing to pick them up, you can get great prices. 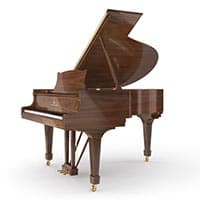 Spinets are unusual members of the upright piano family.

They were popular in the 18th century, and often ended up getting used in 60s/70s pop production as well.

Originally, spinets were built like harpsichords – they were wing shaped, the keys were set adjacent to the strings and the sound was produced through the plucking of strings instead of hammering.

These days, spinets are just pianos that average around 36” in height.

They are the smallest acoustic piano (besides toy pianos) and thus produce the smallest sound. Their soundboard is small and the strings are short.

The action on a spinet is different from the action on most other pianos. They use a drop action, where the keys are not connected to the action.

A rod connects the short keys of the spinet to the rest of the action mechanism. As result, it’s hard to control the action of a spinet. Plus, dynamics are harder to express and the instrument is hard to tune.

The spinet is less useful as a day-to-day player’s piano, and is more useful in a production setting, where you are looking for the specific sound that a spinet generates.

Here’s an example of someone playing a spinet from the 1950s, made by the Wurlitzer company, who also made the famous Wurlitzer electric pianos.

As you can see, old-fashioned spinets sound more like harpsichords, and new spinets sound like a sort of thin, honky-tonk style piano.

Digital Pianos Are A More Affordable Type Of Piano

Digital pianos have replaced upright and console pianos as the most popular piano for the home.

They are much cheaper, they don’t need to be tuned and they are often portable.

Digital pianos digitally recreate the sound of piano through sampling and algorithms. They will respond to your touch in a similar way to an acoustic piano and produce sound based on how you are playing.

Some of the challenges presented by digital pianos are:

It is difficult to recreate the feel and touch of a real piano, striking real strings, making a real acoustic sound.

You will never be able to play a digital piano with as much expression as an acoustic one, simply because the keys are generating a sampled sound instead of an acoustic one.

The keys themselves can feel plastic-y or cheap, and sometimes they are not weighted well or not weighted at all.

Many digital pianos come with their own built-in speakers.

While this is nice (as you don’t have to use an amp), it can also be a bit disappointing.

The built-in speakers on cheaper digital pianos are usually cheap speakers that will give you little bass response and won’t sound full.

Even on more expensive pianos, you can find it disconcerting that the sound is coming from a speaker rather than the piano itself.

These pianos usually come with built-in speakers, a decent array of sounds but the feel will vary wildly.

These pianos have great action and beautifully sampled sounds, but they usually don’t come with their own speakers. They are designed to be played through a monitor or an amp. They also work well in recording applications.

There are many kinds of digital pianos including: 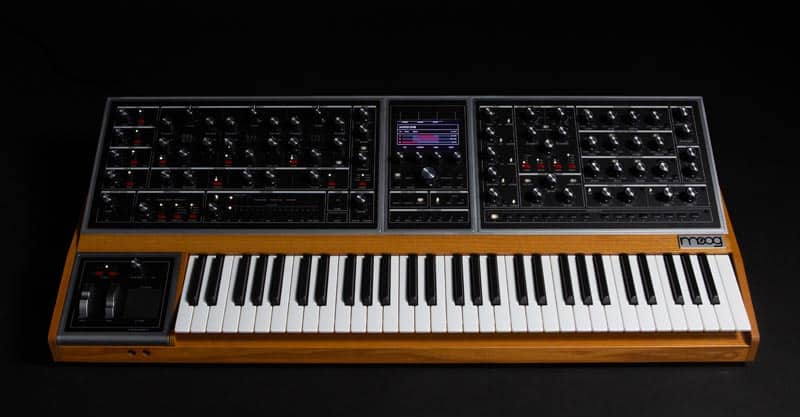 Synthesizers are able to generate and manipulate their own tones. These would include Moogs, Prophets, Nord Synths and many more. 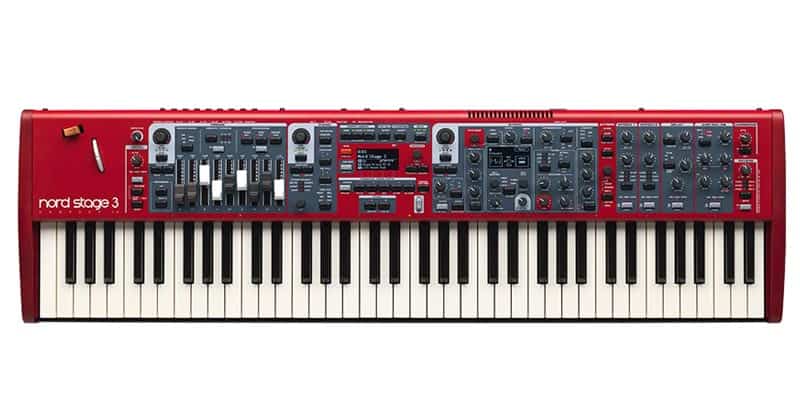 Stage pianos are sample-based instruments. They are high-end and are designed to replicate pianos, electric pianos and sometimes organs accurately. They usually don’t have built-in speakers.

Digital piano consoles are designed to replace the upright piano in the home. They are specifically good at creating piano sounds. Most of their other sounds are cheesy.

They have built-in speakers. Sometimes they are portable but most of the time they are self-contained units. 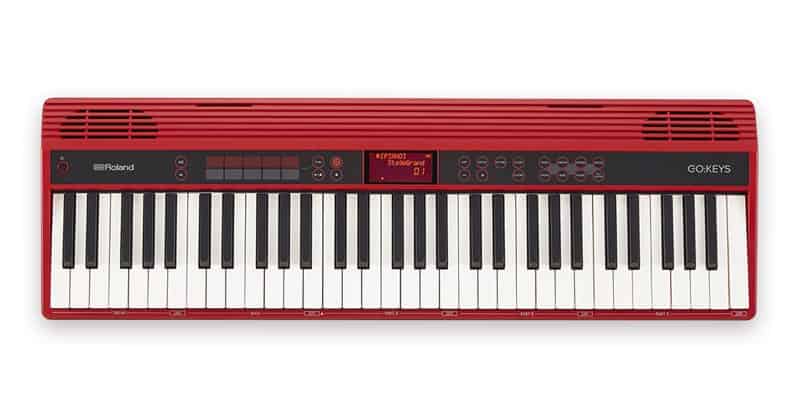 These are what most kids are starting out on.

They are cheap, usually under $300. They are also portable and have built-in speakers.

Generally, these entry-level keyboards don’t have a full set of keys, because they are designed for new students who aren’t making use of the full keyboard.

These are fine when you are starting out, and are certainly a less intimidating purchase.

Square grand pianos are rare and don’t often get talked about.

Square pianos were popular in the late 1800s in Europe and America.

Whereas the modern piano is similar to a harpsichord in appearance, square pianos are similar to a clavichord.

These pianos had many of the same benefits as a baby grand piano (full, large sound, great action) with the added benefit of being square, so that you could fit them up against a wall.

Major piano makers like Steinway made square pianos, but as the upright piano gained popularity, square pianos decreased in popularity until they faded into obscurity.

Here is a working square grand piano made by Steinway in 1867: 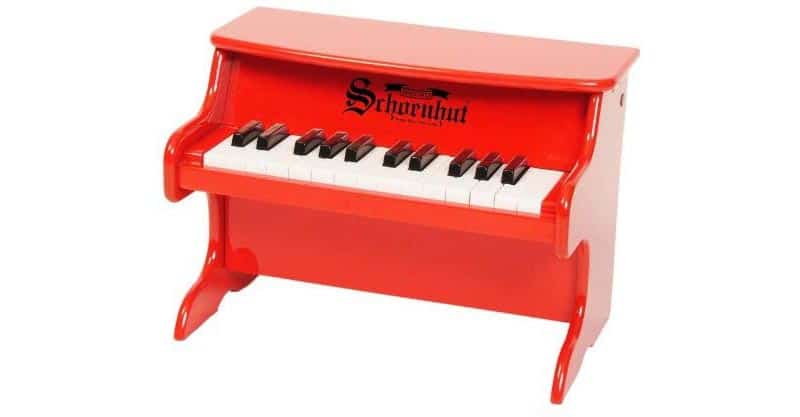 While many kids use keyboards, toy pianos are worth mentioning as many kids are introduced to the instrument with one of these.

Toy pianos come in many shapes and sizes; miniature grand pianos, miniature digital pianos (like the one pictured), and even mats that roll onto the floor for kids to step on.

Toy pianos sometimes have color-coded keys and fun sounds on them – anything to get kids interested!

Some types of vintage toy pianos are even used in the studio, because they have peculiar sounds on them.