You are here: Home / Piano / How To Play Piano For Beginners In 7 Steps 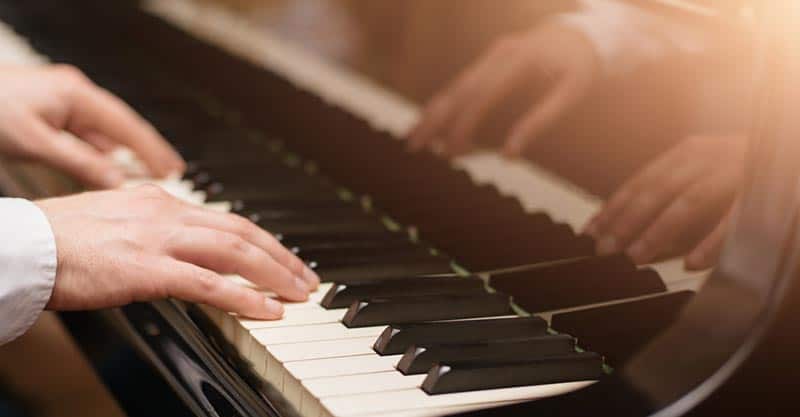 Interested in learning how to play the piano? Great!

As with learning any instrument, it can take time. But rest assured it’s a fun and worthwhile journey.

In this guide, we’ve broken down the basics into seven easy steps.

Are you ready? Let’s learn step by step!

Learn How To Sit & Hold Your Hands At The Piano

Before you do anything else on the piano, I want you to think about how you are sitting and how you are holding your hands.

It seems boring, but nipping bad technique in the bud will save you the pain of unlearning bad habits, and the literal pain of injury that can happen as a result of poor technique.

I have had many friends teach themselves piano as a second instrument, but never receive any training or feedback on how they are sitting or playing.

This can result in wrist injury, sloppy playing and general discomfort.

My technique is reasonably good, and I still developed tendonitis in my right wrist from over-practicing!

Try watching a few videos like this one, to get familiar with good technique:

One of the major benefits of lessons at this stage in your learning is that your teacher can give you active and physical feedback on your posture and hand posture.

When I’m showing students how to hold their hands, I can demonstrate with my hands what their posture should look like and I can physically move their hands into proper position.

This type of feedback is invaluable.

Get Familiar With The Notes On The Piano

In my opinion, the first thing you should do upon deciding to learn the piano is learn the names of all the keys. The easiest way to do this is to label all of the keys with tape and a marker.

Why? Because whenever you learn or play a song, you’ll associate the notes you’re playing with the names of the notes, because they are right there in front of you.

As you continue to practice, the notes will become ingrained in your memory.

Knowing the names of the notes is essential to understanding how the keyboard works, how music works and how to play music with other people.

If you know your note names, you are much closer to understanding how to create major and minor chords. Then you can play almost anything.

Here are my action steps for this part of your learning.

Print this out and put it on your wall.

Get Some Masking Tape And A Permanent Marker

Use the masking tape to cover the keys and write on top of the tape (instead of directly on the keys).

Label at least one octave of notes. Make sure to label both the black keys and the white keys.

When You’re Ready, Take Off The Tape

You don’t see many concert pianists playing with tape on their piano. Your goal should be to take off the tape after about a month or so.

Practice by taking the tape off, writing down all the notes on bits of paper and drawing them from a hat. See how quickly you can remember where the notes are.

Try to remember where the notes are without relating the notes to middle C – just remember the notes for themselves! 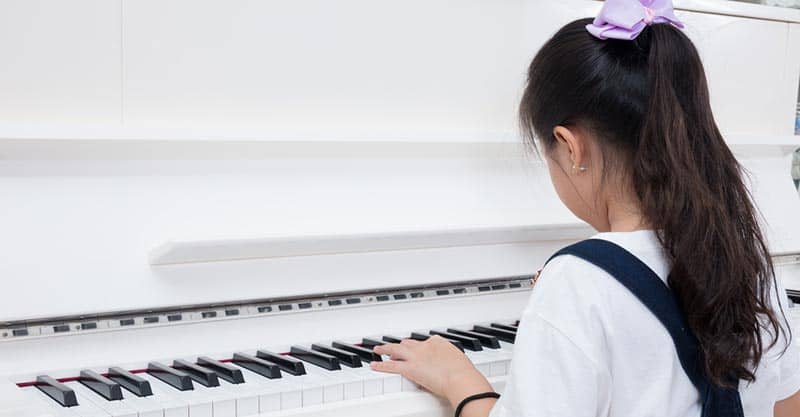 You didn’t come to the piano to learn a bunch of theory.

You will eventually learn some theory and it will change your relationship to music. But first and foremost, you want to play songs.

There are dozens of easy piano tutorials on YouTube. Some of them are MIDI tutorials that will show you which notes to play on a light-up piano, others are more like real lessons.

Either way, the sooner you’re playing songs, the better.

Just make sure to mix learning songs with lessons that will improve your playing in a more general way. The better you get at all of the things I’m going to list below, the better you will be able to play .

Get Familiar With Sheet Music Notes

It’s true that not every musician knows how to read music. That said, most pianists do.

This is because many piano players grow up classically trained, or at least have taken music lessons in the past. This generally means learning songs out of a piano book, which will teach you how to read music.

Reading music on any level is a huge asset as a musician. Even if you’re a slow reader, you can theoretically figure out any song that is written down.

Here are my action steps to learning sheet music:

Start With The Treble Clef & Label The Open Spaces First

Start with the treble clef, because that’s where the melody is usually found.

First, label the white spaces from the bottom up with FACE. This is an easy way to remember what the spaces in the treble clef are called.

Label The Line In The Treble Clef

The lines on the treble clef are EGBDF. A common mnemonic device for remembering these notes is “Every Good Boy Deserves Fudge”.

Work on memorizing both the spaces and lines on the treble clef.

Find A Simple Song & Write Out The Notes

Find an easy song to learn, and underneath the sheet music, write out the note names from memory. Then, play the song!

Do this with a few dozen songs, and you’ll have memorized all of the note names.

Repeat The Process For The Bass Clef

Practice by labeling the bass clef next.

The spaces are labelled ACEG. A common device for this one is “All Cows Eat Grass”.

The lines on the bass clef are GBDFA. “Good Boys Deserve Fudge Always”.

Then, write out the note names on some songs you want to learn and learn them!

Scales are kind of “boring”, I guess. Everyone seems to think so.

But you don’t need to spend much time on scales for them to be useful.

Start with the C major scale. Here’s how to learn the scale, and what it can teach you.

Find middle C. Now, work your way up to the next C, playing every white key in order. It will go like this:

Then, work your way back down.

Practice The Scale Forwards & Backwards With A Metronome, Alternating Hands, Hands Together & With Different Accents

Scales are amazing tools for working on the nuts and bolts of your keyboard playing.

Always practice scales with a metronome. Developing a good sense of time is hugely important, and scales are revealing of your sense of timinng.

Scales also improve your hand dexterity. Begin by playing the scale in your right hand, and then your left hand and then put them together.

Play the scale legato (long notes that go into each other), staccato (short notes), straight and swung.

The beautiful thing about scales is they are all patterns.

To notice the patterns, you need to be familiar with the terms Whole and Half-Step.

Whole Step means two notes separated by one other note. C to D is a whole step, because it has C# between them.

Half Step means two notes beside each other. E to F is a half-step, because there are no notes between them.

All major scales have the following patterns:

This applies to C major and to every other scale.

If you want to learn a scale, just apply this pattern to whatever note you’ve started on! 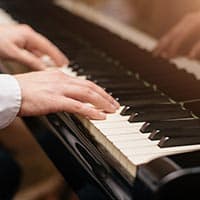 The next thing you should understand is how to form basic chords and how they work within scales/keys.

To form chords out of this scale, start on C and then play notes together in thirds.

A third is an interval describing notes separated by a letter name.

C to E is a major third – they are separated by a note name and by four semitones.

D to F is a minor third – separated by a note name and three semitones.

To build the C major chord, start with C and E, and then add a third above the E, which will be G.

C Major is major because the first third in the chord is a major third.

D Minor is minor, because the first third in the chord is minor third.

You can build a chord on every note of the C Major scale:

B Diminished: B D F

Note: The chord that is built on the seventh note of any major scale is going to be a diminished chord.

A diminished chord is made up of two minor thirds on top of each other.

Major chords are a major third and then a minor third.

Minor chords are a minor third and then a major third.

Again, this pattern applies to every major scale. Using these concepts, you can build literally any major or minor chord:

This is also how the Nashville Number System works.

Each scale degree is given a number.

In every key, the major and minor patterns are the same:

So, if all you know is the key, someone can tell you the numbers of the chords and you can figure them out!

Learning the basics of chording will give you the best basis for a self-taught approach to music theory.

It helps you understand the relationship between scales, keys, chords and how songs fit together. 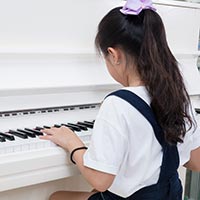 If you’ve been reading a bit of music, you’ve probably already started learning how note values are written out.

Learning how to read and write rhythms helps you understand and recognize rhythms when they are being played.

Notes on a page denote how many beats should be given to that particular note.

Eighth notes: half a beat

Sixteenth notes: a quarter of a beat

Thirty-second notes: an eighth of a beat

There are other notations to understand as well.

For example, adding a dot to any of the above notes will extend the note by half of the note’s value.

Triplets fit three notes into one beat or one bar.

Understanding written rhythms is tricky. Work on it with a teacher!

Practice as often as you can. Every day if possible.

My suggested practice routine is:

Consistent practice can be a joy and a chore. Keep it fun and keep at it!

How To Play Piano For Beginners, Final Thoughts

This is a very beginners guide to playing piano.

That said, if you read and apply all that you’ve learned, you’ll definitely get a good head start to learning this amazing instrument.

Let us know your early progress with playing piano in the comments, and what you found most helpful.