You are here: Home / Music Instruments And Tools / 7 Best 4 Channel Mixers With Effects 2020 (And Without) 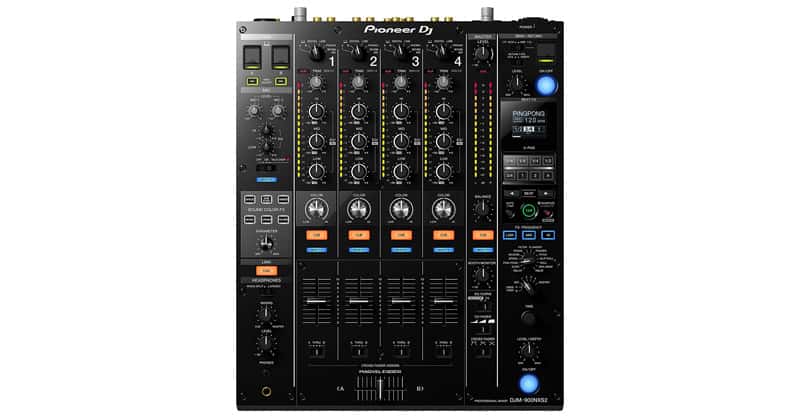 Whether it’s for recording, DJing, or live mixing purposes, there’s no denying that a mixer is a good tool to have.

A four-channel mixer doesn’t necessarily offer a lot of inputs or flexibility. You probably wouldn’t mix even a three-piece band with a four-channel mixer (unless you absolutely had to), because you could easily use up four channels just on instrument mics, never mind vocal mics.

Meanwhile, if you’re DJing, mixing a few sources of audio for an event (such as a wedding or a party), or if you’re looking to send audio signals across to another room (as you might in a studio environment), then a four-channel mixer is a must-have.

So, what are the best four-channel mixers on the market? Here are several worth checking out.

For the professional DJ who needs a piece of gear they can depend on – the DJM-900NXS2 is a club standard four-channel DJ mixer with 64-bit high quality audio for a natural analog sound, 96kHz/24-bit sound card with no quality loss, independent send/return for external hardware, and four PHONO inputs and DVS support for turntables.

Yes, you will pay a hefty price for the Pioneer DJ unit, so this isn’t for you if you aren’t DJing in a professional capacity.

Customer sentiment is good, and essentially the only complaint people have had is that it’s too expensive. You can decide for yourself whether it’s within your budget. 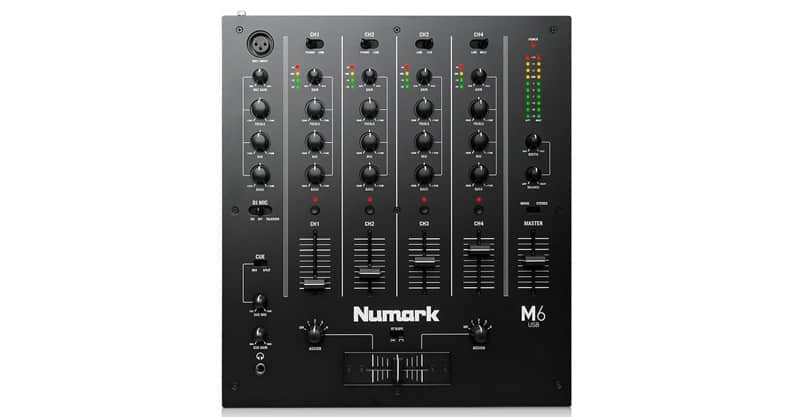 The M6 USB falls under the category of a DJ mixer, which is a little different from a standard audio mixer but might be just what you need if you’re DJing.

Customers agree – this is a great mixer for the money. The Numark might be all you need for your next gig. 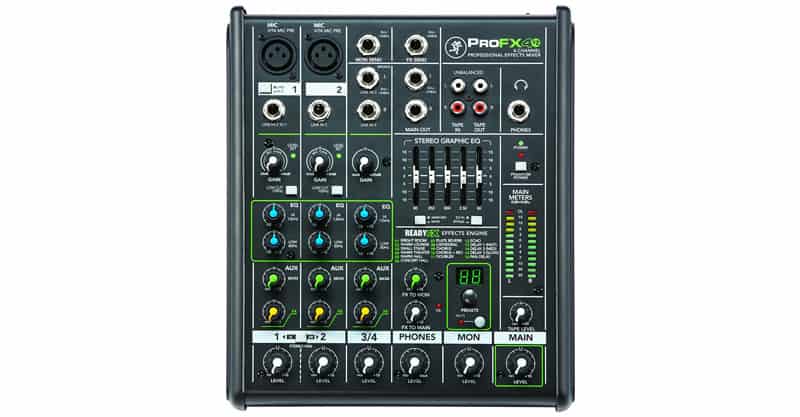 The PROFX is an affordable, quality mixer that comes in a few different configurations – 4-channel, 8-channel, 12-channel, 16-channel, 22-channel and 30-channel.

Most customers haven’t had anything negative to say about this board. Though not perfect, it’s affordable and reliable. The Mackie is worth a look. 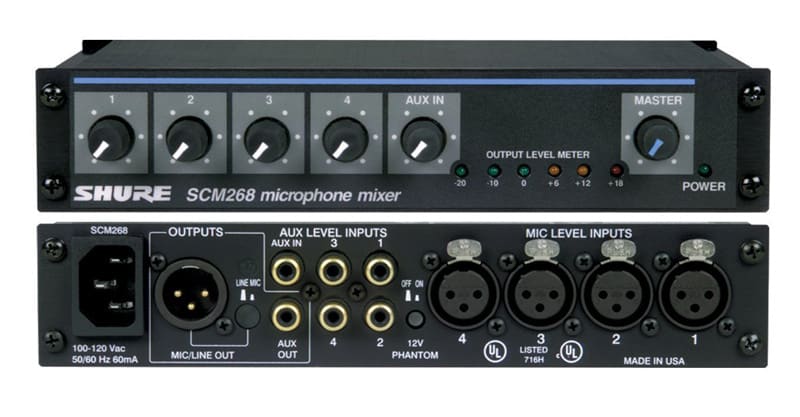 This unit is quiet and spatially efficient, enabling you to get a quality audio signal without a lot of fuss. It doesn’t come with effects, and it might cost a little more than the other options out there, but this is a great, straightforward unit for mixing four channels.

Customers haven’t had anything bad to say about the Shure, so if you know you want a compact mixer with great sound and no frills, you’ve found it. 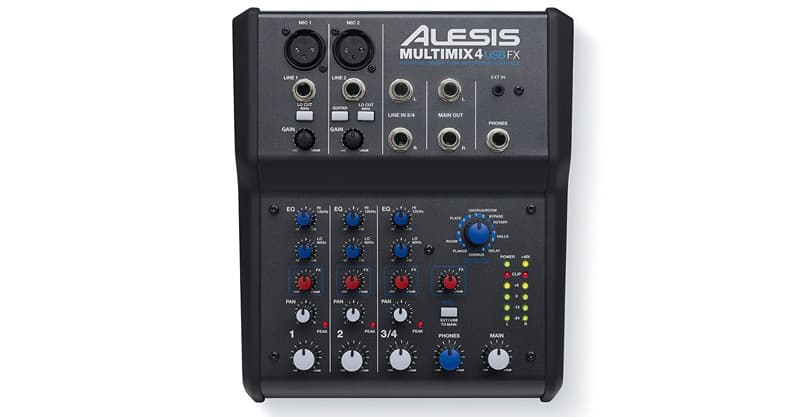 You wouldn’t necessarily expect to be able to get all of that for the price, but that’s what this little Alesis mixer offers.

Most customers have had good things to say about it, though some have had issues getting it to work with their computer.

The Alesis is a good basic board if you aren’t looking to accomplish anything out of the ordinary. 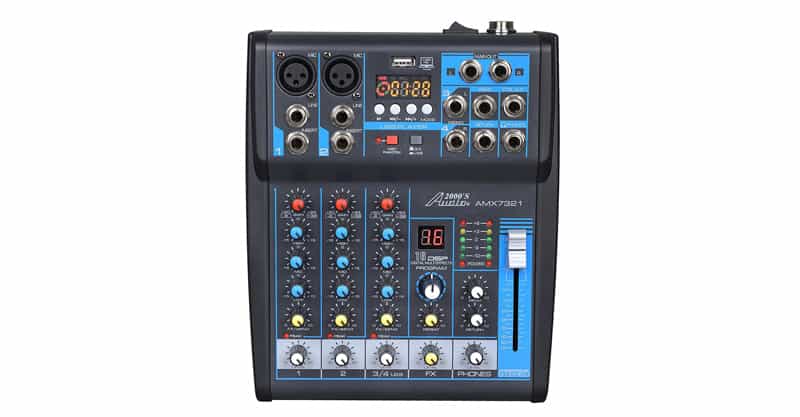 For those who just need a mixer that will get the job done and nothing more, the AMX7321UBT might be worth checking out.

This is one of the most affordable four-channel mixer on the list, with two AUX outputs, a built-in 32-Bit/24-Bit AD-DA Converter Sound-Effects Processor, built-in Bluetooth for use with iPhones, iPads, and other tablets, USB connectivity for recording and music playing applications, and phantom power.

Customer sentiment is a little mixed, and some have reported hissing they could not eliminate. But there are still some surprisingly good reviews for this little mixer. Again, if you just need something to get the job done, you should check out the Audio 2000s. 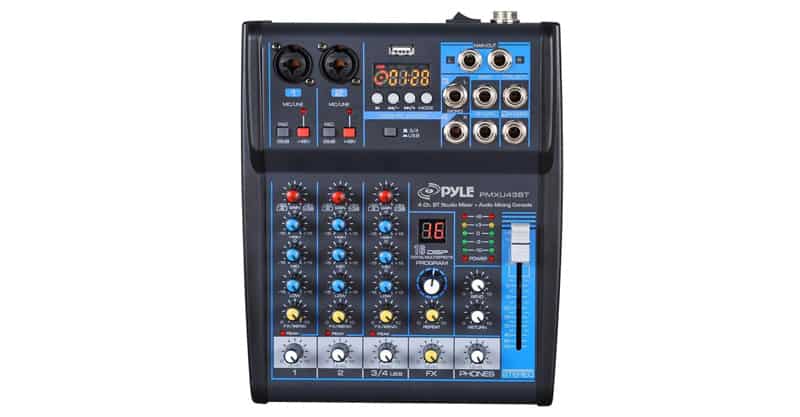 This Pyle mixer is essentially a direct competitor to the Audio 2000s console. It looks about the same, is priced about the same, and even has roughly the same features.

This console allows you to connect your external USB, computer, flash drive or Bluetooth device for mixing and recording. The built-in controls can be used to play, pause, skip tracks and switch between different modes.

This mixer also allows for Bluetooth wireless streaming from Mac and Android devices, comes with mic and stereo line inputs, a multi-voltage power supply, and features a rugged steel chassis.

Whether for DJing or just general mixing, this unit will do the trick. Most customers have been pleased with the Pyle, but I would suggest doing your own research to see if it’s right for you.

What Should I Look For In A Top 4-Channel Mixer? 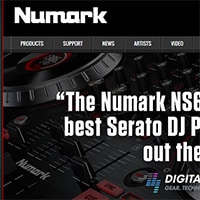 When it comes right down to it, four channel mixers are getting a little harder to find. This is because it’s become easier for manufacturers to cram more features into a smaller space.

They’ve probably figured out, by now, that most people need more than four channels – especially bands.

Most DJ mixers tend to be four channels, however, and if that’s what you’re looking for, there’s everything from affordable and dependable all the way up to expensive and feature-rich. I’ll talk more about the difference between audio and DJ mixers a little later.

First, here are a few things I would look at when buying a four-channel mixer.

What types of inputs do you want/need?

DJ mixers tend to come with analog and digital ins because of how they are used.

That being the case, a DJ mixer probably isn’t ideal for a singer/songwriter or small band (unless you want to pick up a bunch of converters), and an audio mixer with only XLR and 1/4” inputs probably won’t work that well for a DJ.

Look carefully at each board to know exactly what kind of inputs it comes with and confirm that it’s what you need for your purposes. Again, you can always use converters in a pinch, but it’s better to have the right connections than to sacrifice.

Effects aren’t essential to have. You can always use outboard effects, and in many cases achieve better results with these units than onboard effects.

But onboard effects are convenient and can sometimes help you avoid embarrassingly bad sound in a room that has terrible acoustics, bad grounding, or otherwise less-than-ideal circumstances.

If you’re running sound for an event, you probably want to be invited back again (especially if it’s a paid gig). So, having a few options is always a good thing.

This isn’t to suggest effects will save your gig, as that’s probably not the case, but you might be able to “fake it” a little.

In most cases, you aren’t going to pay a lot of extra money for effects, so unless you’re already sufficient in that regard, you might want to get a board that comes with them.

Oh, and effects for DJs are quite important, so if you’re a DJ, you should probably spring for a board with effects.

If you read the reviews, you’ll probably see people talking about hissing or noise or something to do with the overall sound quality of a console.

Pay attention to these comments, as they should give you a good idea of whether a board is worth buying.

Granted, if you don’t need it for anything fancy, even a cheap board should do the trick. For home use, or for small gigs, maybe you won’t be overly concerned with sound or functionality.

A four-channel mixer doesn’t cost a lot either way, and in most cases it will prove cheaper to replace one than to repair one. It sounds wasteful, but that’s the world we live in now. And, as you can imagine, there isn’t going to be much resale value for a four-channel mixer, unless you’re buying a more expensive DJ mixer.

It’s simple really. Don’t throw your console all over the place. Keep it on a sturdy table or desk while in use. Pack it into a padded carrying case or road case when you’re not using it.

Consoles can last a long time, though in some ways they have become more “dispensable” than ever, especially the cheaper ones.

Be more cautious with expensive gear. You don’t want to inadvertently break your $2,000 console, though it probably could be repaired.

Don’t worry too much about a console’s durability, unless you see some major red flags in the reviews.

Is There A Difference Between An Audio Mixer & DJ Mixer?

A mixer is a tool you can use to mix separate channels of audio together.

In the case of a solo act or band, you’ll probably be mixing voices and instruments.

So, that’s one major difference between a standard audio mixer and DJ mixer, though one can stand in the place of another, especially if you have the right cable converters.

A DJ mixer may also have more in terms of crossfading options compared to a standard audio mixer. Since a DJ is often fading between one audio source to another, this makes a lot of sense. Sometimes, A DJ mixer will also have a dedicated mic channel, separate from the other four channels (for making announcement, etc.). Furthermore, sometimes DJ mixers have more effect types built into them.

Besides these differences, audio mixers and DJ mixers are a lot alike. If you have the right types of cables and connections, you can use either for performance, recording, or DJing.

But as you an imagine, a standard console is better for general audio purposes, and a DJ mixer is better for DJing, because the consoles have been designed for those specific purposes. 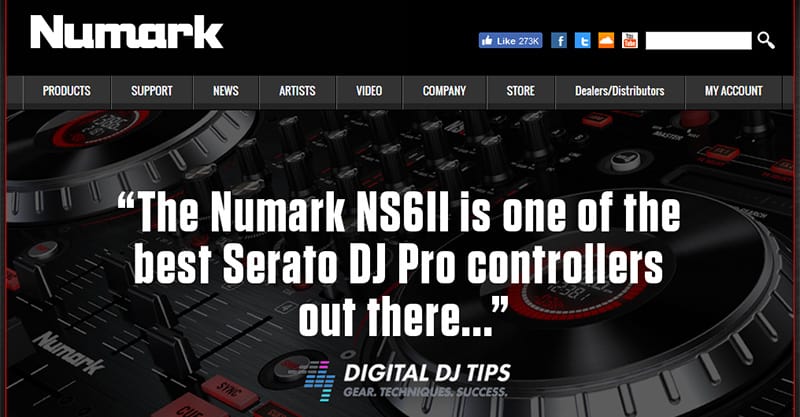 Whether you’re a musician, event organizer, DJ, or even podcaster/broadcaster, a mixing console is a great tool to have at your disposal. In some instances, it’s even essential.

If you’re in the market for a mixer, then consider what your needs are. Generally, it’s better to have more channels than you need, just in case. Some functions are unnecessary and may only add to the cost and complexity of the board (i.e. autotune), so beware.

The simplest solution is often the best solution, and because mixers are so affordable these days, you won’t need to spend an arm and a leg on a console, especially if it’s a four-channel mixer.