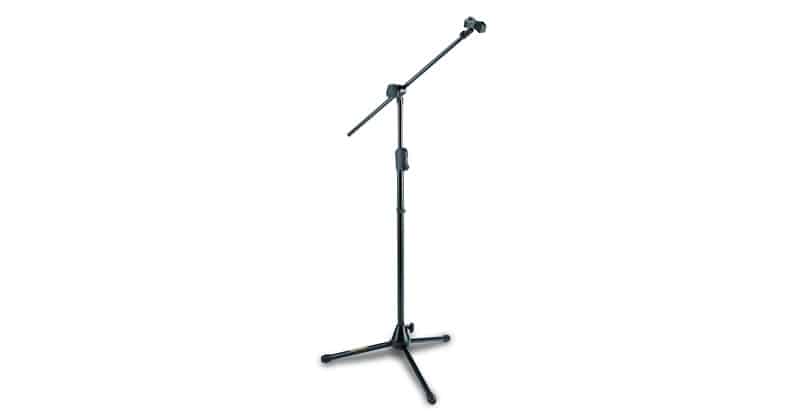 There may not be anything particularly thrilling about microphones stands. But one thing’s for sure – if you’re planning to record, you’re going to need them.

Some are flimsy and fall apart easily. Adjustable stands suddenly become less adjustable. Threads become stripped. These are all signs of a poor mic stand (unless it held up for several years before falling apart).

But whether you’re willing to spend a little or a lot, there are great stands to fit your budget. Here are several of them.

The Hercules MS533B hideaway boom stand is highly adjustable, allowing you to change the height and angle of the boom quickly and easily. Likewise, the overall height of the stand can be adjusted from 42 to 94 inches, giving you a good range to work with.

The Quick-N EZ adaptor makes it easy for you to swap mics in and out, so if that’s something you find yourself doing a lot, you’ll love this stand. And, if you’re every in a hurry in the studio, this stand could come to your rescue.

There isn’t too much more to say on the Hercules. Its price is reasonable for what you get, and it’s a solid stand. Worth a look. 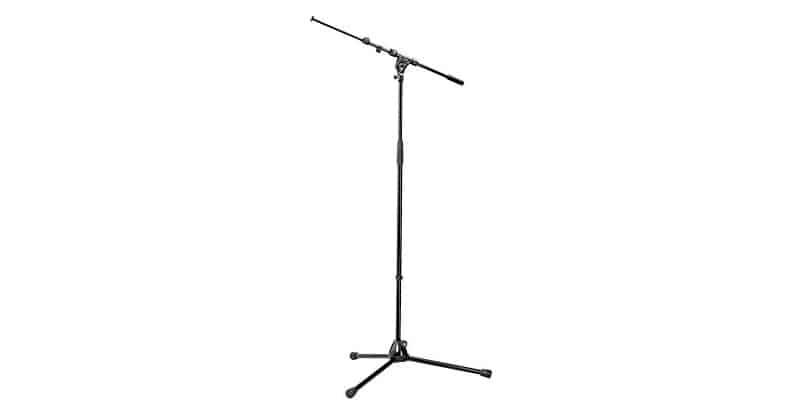 Did I mention that I’m partial to tripod stands? I mean, they aren’t necessarily great for everything, but whether for live or studio use there’s plenty to like.

The K & M microphone stand is a solid choice overall. It’s made of Swiss steel and has a zinc die-cast base. It is highly adjustable while still being quite portable.

The five-year warranty is also hard to ignore. That should certainly tell you something about the build and quality of this stand.

You will pay a little more for the K & M stand, but if you aren’t on a tight budget, I think you’ll find this to be an excellent choice. 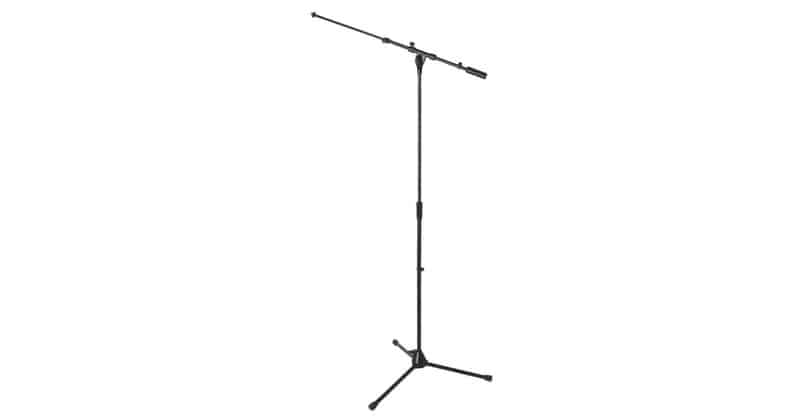 The On-Stage M59701TBPLUS mic stand is a stable tripod stand with a 24” base spread. That ought to make it easier to move around without it bumping into your other precious gear.

The boom length and height adjustment should be more than enough for most applications, giving you plenty of reach, even into awkward spots.

The stand is made of thick steel tubing, die-cast zinc clutch and leg housing. So, it’s nice to know it’s built of solid materials.

Unlike many mic stands, the MS9701TBPLUS also has a counterweight, which should prevent the stand from tipping. Not that mic stands should be expensive, but the On-Stage also happens to be a great deal. 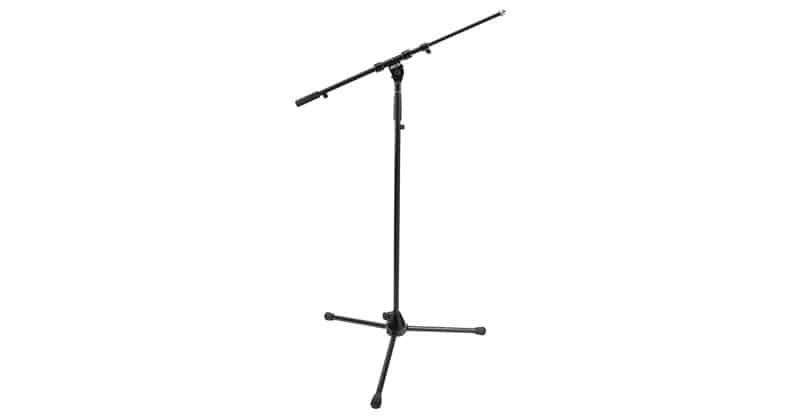 The DR Pro tripod mic stand is a very practical choice for most situations. The boom overs between 19 and 31 inches, while its overall height is 40 to 69 inches. Adjusting is quite straightforward and easy to do.

It is also durable, which is always a good quality to look for in a stand. Not that you’ll necessarily be moving your stands around a lot, but given a choice between flimsy and durable, I always go for durable.

So, overall, the DR Pro is another worthy mention on this list. 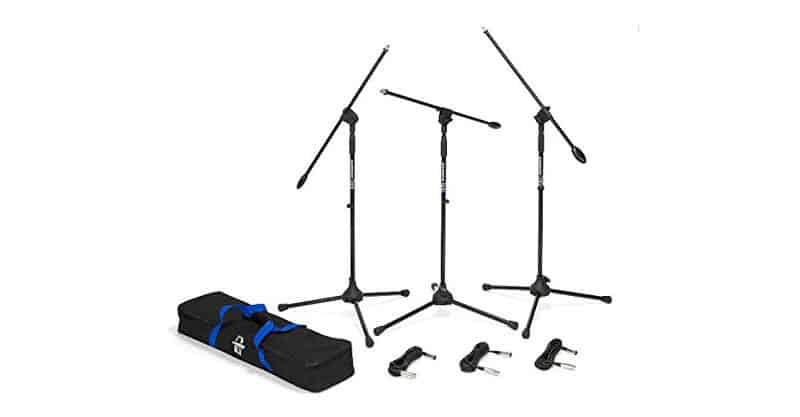 Now, I’m sure you can see why I like this offer. You can get three Samson BL3VP boom stands for a solid price from a reputable microphone manufacturer.

Look, you’re probably going to need multiple mic stands anyway. And, you’re going to need plenty of cables too. So, it can’t hurt to get a bunch of your gear needs taken care of in one fell swoop. In addition to the stands, this pack comes with three 18-foot gold plated XLR cables and a nylon carry bag.

For those who like to get a lot of their shopping done at once, the Samson 3-pack is worth a look. 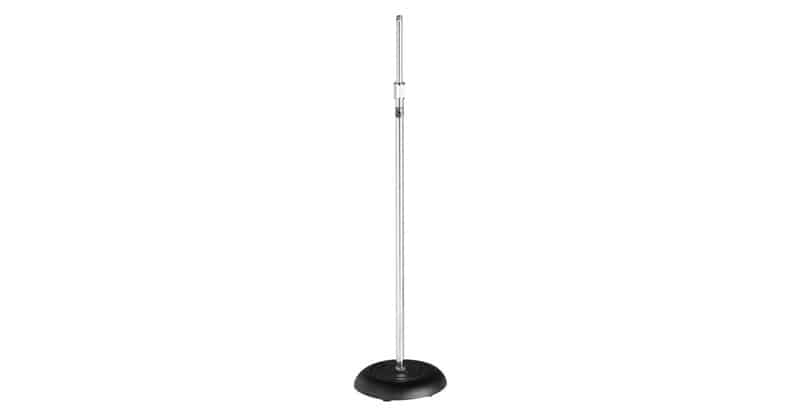 Tripod stands are great, but sometimes you need something more basic – like a straight microphone stand.

The Atlas Sound MS-10C is a popular option for plenty of applications. It’s durable, rugged and simple. It’s also quite adjustable, from 35 inches to 64 inches.

And, with a base like that, you know it’s not going anywhere (i.e. tipping or falling over) in a hurry.

Apparently, the boom can unscrew from the base but aside from that, this is a quality Atlas Sound microphone stand. 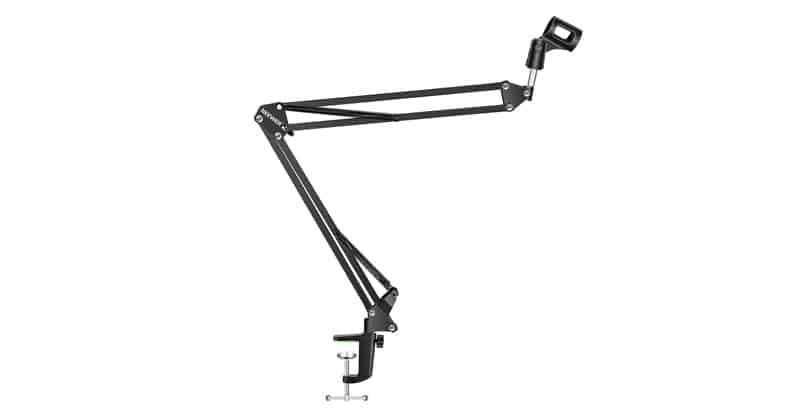 Depending on what you’re trying to do in the studio, a scissor arm stand is not a bad piece of equipment to have. You could use it as a voiceover, podcast or talkback mic, or even clamp it onto tables within your recording space to capture vocals.

The NEEWER mic stand is a popular option these days, and that’s hardly surprising. It’s durable, affordable and certainly portable too.

Now, do keep in mind that this stand isn’t going to have anywhere near the reach of a traditional tripod or straight microphone stand. So, only get the Neewer if you have a specific use for it.

What Should I Look For In A Microphone Stand? 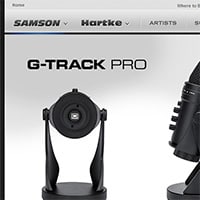 Fortunately, shopping for a mic stand isn’t that complicated.

If it looks good, feels good, adjusts quickly and easily and is stable, it’s probably a solid stand.

Usually, you will pay a little more for a stand like that. But sometimes it’s better to spend more on something that lasts longer versus spending less on something that might not stand the test of time (pun intended).

But in case you can’t make up your mind, here are a few factors worth considering when buying a mic stand.

Quality means different things to different people. If I were to define this a little further, I’m referring to the materials the stand is made of as well as how well its various components work together. If it’s an adjustable stand, then adjustments should be easy to make, and they should hold once you’ve made them.

Quality often has a way of revealing itself from the outside too, especially with microphone stands. But how a stand looks isn’t always an indication of how good it is, so beware.

Does the stand stay in place without shifting or falling over? Does it hold your mics properly? Is it compatible with the mics in your mic locker?

Stability is particularly important in a studio situation, because you’re working with a lot of expensive gear – microphones, guitars, pianos and keyboards, mixing consoles, rackmount effects, computers, speakers and more. You don’t want your microphone stands falling over and wrecking your gear.

So, your stands should be stable. This will help make the recording process a lot smoother too.

Durability tends to matter more on the road than in the studio. But that doesn’t mean it doesn’t matter. After all, you’re going to be spending a good amount of time moving and adjusting mic stands. Certainly not as much as you would on tour, but it still adds up.

Generally, a mic stand should be able to stand up to some abuse. They’re designed to. The cheaper ones can’t.

Mic stands use seem like commonsense, but I’ve seen a lot of people misuse them. So, the easier your stands are to use, the better.

What Type Of Mic Stand Is Best For Me?

You’ve probably noticed that there a bunch of different types of mic stands out there – some that weren’t even mentioned earlier.

With that said, there isn’t necessarily a “best” stand. It just depends on what you’re using it for. And, most studios should have a mix of different stands. This allows you the flexibility of using the right stand for the right situation.

In a general sense, straight stands are good for vocal microphones, because while you want the singer to get in nice and close, you don’t want them too close. Plus, you’re probably going to be attaching a pop shield, and that can be a little easier on a straight stand.

Boom stands are great for a variety of purposes, especially if you need to get “directional” with mic placement. Let’s say, for example, you’re going to be using a small-diaphragm condenser mic to record an acoustic guitar (a common choice). You probably want the flexibility of being able to point the mic in the desired direction to capture the best sound possible. You can do that relatively easily with boom stands.

Desk stands, as you can imagine, offer less reach. But they sit nicely on top of a desk and are usually quite sturdy too. You can use these for whatever you want, assuming you don’t need much reach. You may even be able to use one for setting a mic on an amp.

A scissor arm stand is typically used in the control room or in a dedicated podcast or voice recording space. You can certainly find other uses for it, but that’s generally what it’s good for.

Finally, low-profile stands are good for any instrument or speaker sitting closer to the ground. Drums would certainly fall under that category. If you’re trying to record a seated musician, they can be good for that. And, of course, this type of stand can be great for guitar amps (or other amps) too.

So, you can probably see why I say it’s best to have a mix of stands in your studio, as it allows you to cater to a variety of situations. In general, you’ll probably be using straight and boom stands more than anything else, but it’s nice to have options. 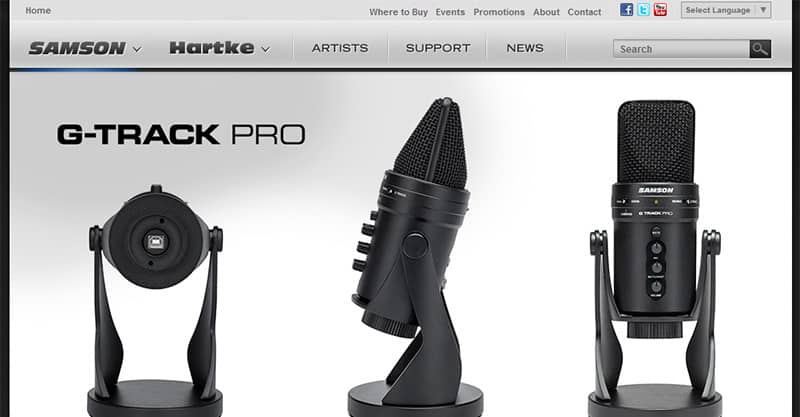 Not really. Most quality mic stands are great for both applications.

The only potential difference is what you might look for in a mic stand.

In a studio, stability is often the most important factor. You want your mic stand to stay in position once you’ve determined where to put it. Constantly having to go back into the recording room to adjust the stand is a pain in the butt. Not just that, but you could end up losing the “perfect position” you achieved when the mic stand suddenly moves on its own or falls over completely.

Stability is important live too, but not quite to the extent that it matters in the studio. Some singers like being able to swivel their mic stand in any direction while on stage. And, to many singers, a stand is more of a prop than anything else. It’s a way to add variety to the performance (i.e. taking the mic off the stand for certain songs, putting it back on for others, etc.).

Additionally, in the studio, you might need your mic stand to reach into tight, hard-to-reach locations. This partially depends on how much room you have and how the studio is set up, but sometimes it’s a necessity to be able to squeeze a mic into a space that might not readily accommodate it.

In any case, what’s good for the studio is often good for live and vice versa. But it’s always nice to keep more expensive stands in the studio where they won’t be subjected to the abuse of the road.

You simply can’t do without mic stands. In the studio, it’s always great to be able to experiment with different mic positions to capture the best sound possible. No one should be holding mics during a recording session. They should all be secured on stands.

Don’t be afraid to invest in quality mic stands. They do make a difference.