You are here: Home / Music Instruments And Tools / 6 Best Portable Audio Recorders 2020 For Musicians, Djs, & Anyone In The Music Industry Reviewed 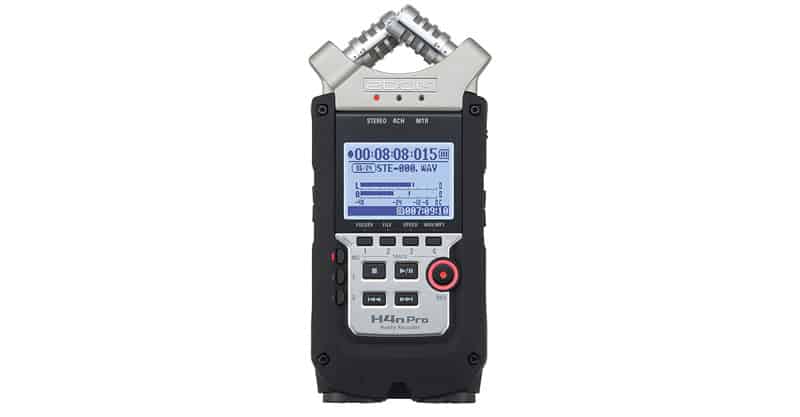 A portable recorder can come in handy in a lot of situations.

Whatever the case, there are options to help you stay within your budget and get the quality of audio you require.

Here are some of the best portable audio recorders on the market, whether you’re a musician, music instructor, DJ, podcaster, YouTuber, executive of a music business or otherwise. 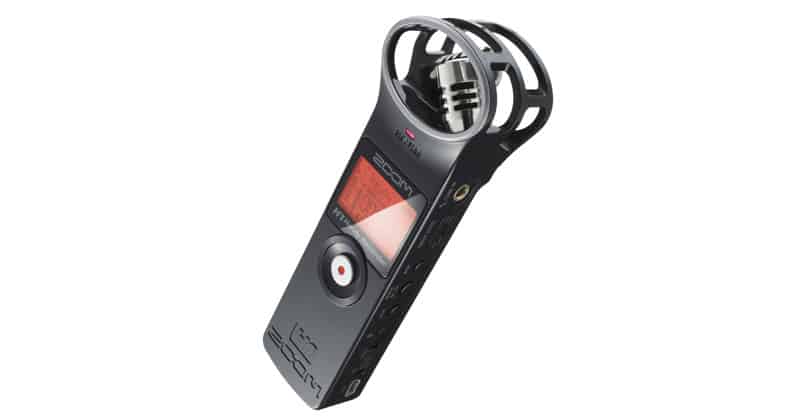 It doesn’t get much simpler or more affordable than this. Simultaneously, you can’t underestimate the power of a Zoom H1.

I’ve used a few Zoom products in my time and I find you always get more than your money’s worth. This unit is no exception.

In addition to the basic black color, H1 comes in gray, blue, red, silver, white and rose gold. So, there’s something here for everyone.

When recording with this unit, ideally the device should be placed about equal distance from the performers and/or speakers. In an instance where you can’t do that, inevitably one voice or instrument will sound quieter and further away than the others. This doesn’t just apply to this portable recorder, mind you.

Now, if you’re asking yourself whether it’s worth looking at the latest model, the H1n, or other Zoom recorders, such as the H4n or H6, the answer is “absolutely”. Zoom makes good stuff. That’s all there is to it. 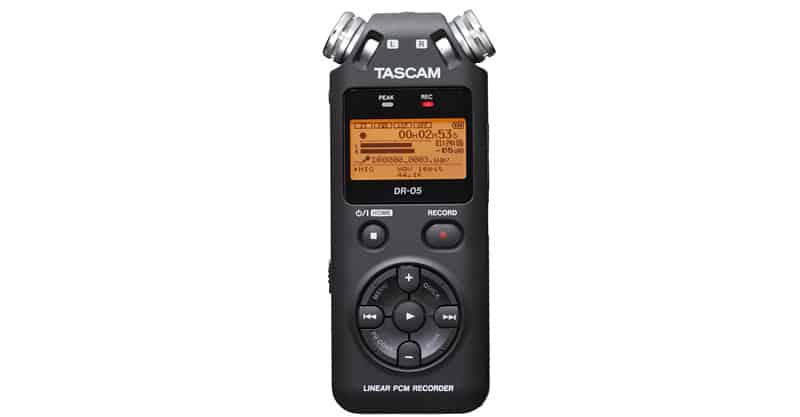 The DR05 is essentially Tascam’s answer to the Zoom H1, which you can tell from its similar price point and product design.

The DR05 comes with two omnidirectional mics (as opposed to the stereo X/Y mics), a mini headphone jack, a tempo change function, chromatic tuner and more. So, while it is a functional digital recorder, the Tascam also packs a couple of features guitarists and other instrumentalists might find intriguing.

This unit comes in black, silver or red. It also comes with its own stand. This is kind of a big deal, since it prevents your recorder from falling over while you’re recording.

Overall, the Tascam is another great option. 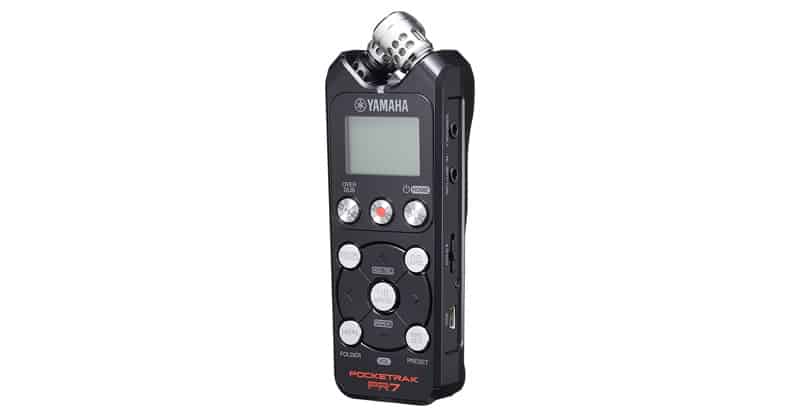 Overall, the Pocketrak is quite expensive. And, while the overdubbing function is relatively attractive and unique, it may not be worth the extra money.

Many users say the Yamaha is great for live applications. Some users were a little disappointed with the audio quality and the fact that it’s made of plastic, but if you’re in the market for a portable audio recorder, you can’t merely overlook this one. 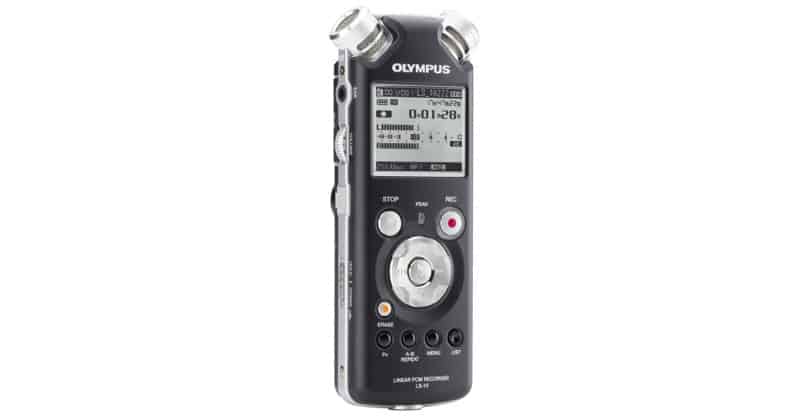 Here’s a good middle-of-the-road audio recorder. The LS-10 gives you uncompressed 24 bit/96kHz linear PCM recording capability, up to 14 hours of recording capacity, the ability to play back high-quality audio and record in several formats (WAV, MP3 and WMA), two gigabytes of internal memory and a removable SD/SDHC media card slot.

Customers have given this device a good rating on Amazon. Some customers have said the recorded level is a little low, but aside from that, you’re looking at a unit that’s capable of capturing great audio with good sound isolation.

The Olympus will give you a run for your money. 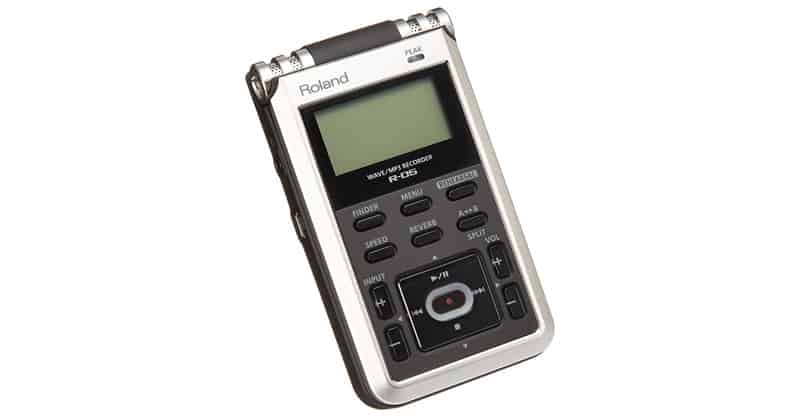 The Roland also has a tough metallic exterior, which is hard to find in a portable recorder. So, you won’t have to worry about dropping this unit as much as you would with the other devices mentioned on this list.

Note that the R-05 does pick up quite a bit of background noise, so if you’re planning to record demos with this unit, it probably isn’t suited to that.

With a good rating, most customers of the Roland unit have been quite satisfied with it. 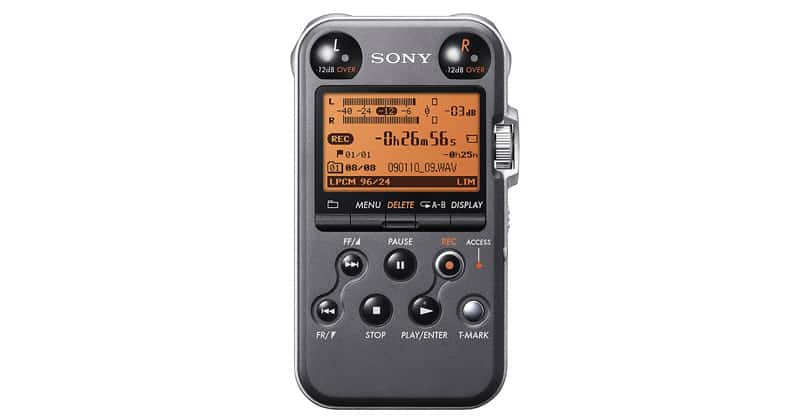 As with the Yamaha, the Sony could end up costing you a pretty penny.

But here’s what the PCM-M10 offers – solid stage storage, electret condenser mics, native recording using WAV and MP3, 96 kHz/24-bit recording, 4 GB memory and a high-speed USB port. It also has an external mic input in case you want to use it with another microphone.

The reviews say the play back isn’t the best on the Sony unit. Not that big of a deal if you’re going to import the recorded tracks in your DAW anyway. But it can be great for recording live music (even though it’s essentially branded as a voice recorder).

Despite a few minor issues, the Sony does make for a great portable recording solution.

What Should I Look For In A Portable Audio Recorder? 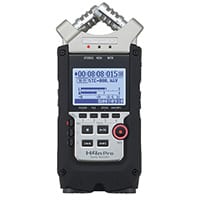 You should be starting to get a sense of what audio recorder is right for you already.

But in case you’re still struggling to come to a decision, here are a few things I would review before purchasing one:

If you’re thinking about replacing your home studio with a portable recorder, you’re probably missing the point.

Sure, you can capture some decent sound with these devices, but there’s no way to get a better-quality recording than with a proper multitrack setup, professional mics and a treated room.

I would suggest using your portable recorder for podcasting, capturing audio for your videos, taking audio notes, and maybe the occasional live recording. It’s in these situations that they prove the most useful.

Still, you don’t want to end up with a device that doesn’t record quality audio. The mics will probably pick up a bit of background noise, but even then, you want the primary source(s) to come through loud and clear.

I don’t think there are too many portable recorders out there that are outright terrible, especially if you’re willing to spend at least $100, but if you’re gong to be paying for it anyway, it may as well produce good quality sound.

Now, it should be noted that sound isolation isn’t essential. If you’re okay with a little bit of background noise bleeding in, there’s nothing wrong with picking a $100 unit.

Also, keep in mind that the mics on these devices are designed to be sensitive so they can capture whatever sound is in its proximity. An amateur would be quite cross about a dynamic mic not picking up the sound at a satisfactory level. And, I have yet to see a portable recorder that comes with a dynamic mic, though there might be one out there. For the most part, it just doesn’t make sense for a portable recorder, though for home and studio use dynamic mics are awesome.

If you’re planning to record demos or even tracks you intend to release into the world, you could use a portable recorder. But this is where you would value sound isolation a great deal more. Either that, or you happen to have access to a quiet, acoustically-treated room.

So, bottom line, if you don’t care about a noisy mix, you don’t need good sound isolation. If you do, then it’s worth investing in a better-quality product.

A Recorder That Holds Up To Some Abuse

“Some” being the keyword here, as many of these devices do not have a solid outer shell. They’re meant to sit atop desks or cameras while recording and aren’t exactly built for rugged use.

You might not be too sad about dropping a $100 recorder and breaking it, especially if you got some good use out of it already. But you don’t want to be constantly replacing your digital recorder either.

So, in my experience durability is not the most important consideration and there are other criteria that should come before it (see above). But it’s still worth considering if you’re planning to bring your recorder with you everywhere you go.

A Device That Doesn’t Break The Bank

No matter what gear you’re buying, budget always ends up being an important consideration and that’s just as true here as anywhere else.

Now, a portable recorder shouldn’t break the bank. But you could end up spending $400 or more depending on which unit you end up going with. That can be a lot to spend in one sitting.

Unfortunately, there aren’t a lot of “in between” options here, although there are some. In most cases, you’re either spending $100 or $400 and up.

So, consider whether you need the extra features, and if not, a more affordable unit should still serve you well.

What Is A Portable Audio Recorder For?

Some people might be scratching their heads wondering why they would even buy a portable recorder to begin with. And, you may be one of those people that don’t need one.

But here are a few ways in which portable audio recorders can be used:

Can I Record Demos Using A Portable Recorder?

I’ve already talked a little bit about whether to record your music using a portable recorder, for a demo, full-fledged release or otherwise.

A portable device can capture great audio. So, as far as audio quality is concerned, they are okay to use.

As you can imagine, you’re going to be a little limited as far as multitrack recording is concerned. Even the Zoom H6 only has six usable tracks. In most cases, you’re going to be tracking one instrument at a time with a portable recorder and saving each audio file separately.

No big deal if you don’t mind importing them into your DAW (digital audio workstation) and manually dragging them in time with each other.

Something else to think about is the room you have access to. A quiet, acoustically-treated room is ideal for any kind of recording though this kind of luxury isn’t always readily available. If you don’t mind picking up a bit of background noise (i.e. you’re recording rock music with a lot of tracks and are okay with a noisy mix), then go ahead and record in any environment you want.

Another interesting possibility is to use the digital recorder as a “room mic”. You could have all instruments mic’d up independently and recorded to individual tracks. The room mic could provide additional ambience to the recording, which can be nice if the room sounds good.

When it comes right down to it, there are no rules. I have a friend who recorded an album using a Mac laptop’s built-in microphone. Yes, it can be done. Just be aware that you might sacrifice some quality by going this route.

Conclusion, Best Portable Audio Recorders For Musicians, Djs, And Anyone In The Music Industry Reviewed

A portable recorder can be a great tool to have on hand. You probably won’t use it for everything, especially if you have a home studio setup of any kind. But for those moments when you need to capture inspiration, it can be handy.

Also note that your smartphone can effectively double as a backup digital recorder. I don’t trust it in every situation, but in a pinch (such as when you’re spontaneously interviewing a celebrity at a music store – I’ve done this before) it will do the trick.

Find a portable recorder that’s right for you. Ultimately, there’s nothing more important than fit.