You are here: Home / Music Business / Why Musicians Fail, Top 7 Controllable Reasons (Don’t Do These) 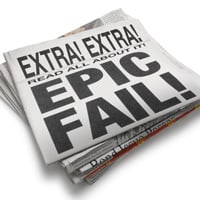 It’s no secret that many musicians fail to hit the aims they set for their music careers. Whether the aim is to play sell out tours, earn a full time living from music, or getting known on a much wider scale. By why is this? Why do musicians fail?

Below I’ll look at 7 things that hinder independent musicians getting where they want to be. All of them are things that are within your control, so if you see you’re making any of the below mistakes, rectify them asap in order to give your music the best chance possible.

If you’ve ever wondered why do musicians fail, you need to read on. If you like and agree with these points and want me to continue writing more guides, please share this guide on your social networking sites, or link to it from your site. Thank you. 🙂

Sometimes, musician fail. Here are 7 things you can do to avoid it happening to you – Tweet This. 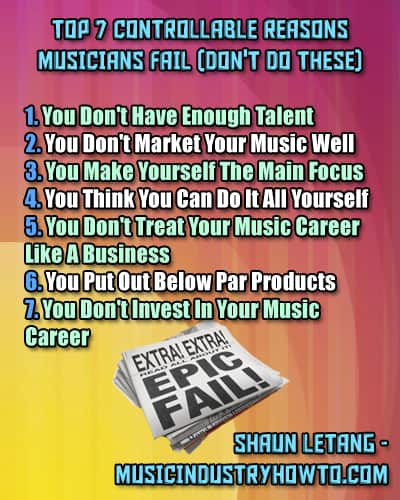 You Don’t Have Enough Talent (And Show People That)

The seemly obvious one that many people often don’t take into account, is your music simply isn’t good enough. Maybe the music you make is ok. Maybe it’s not bad on the ears. But if you’ve got a load of other people in your genre making music that is quite simply better then yours, you’re not giving people a real reason to buy into you over those other acts.

If you’re basing your style and lyrics on other people already out there, it could be time to change your strategy. Figure out what you unique selling point (USP) is, and use it to make yourself stand out from the crowd.

If you’re still quite new to music and your talent isn’t at a good level, don’t try and release any material. Instead, keep practicing. There’s nothing wrong with your talent not being at the highest level yet, it just means you need to keep working at it. If however you’re not currently good enough but you record and release a song, you’re giving a bad impression of yourself, and are doing your music career more harm then good. Some people will be turned off by you, and won’t give your music a chance again in future, even if you do get better.

So if you’re not yet on par with the top people in your genre, stay behind closed doors, figure out your USP, and keep practicing your talent. Only when you’ve these things in place should you start promoting what you can do.

You Don’t Market Your Music Properly 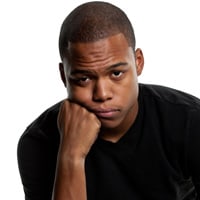 This is a sure way for musicians to fail. While making top quality music is half of the battle won when it comes to getting fans on board, it’s not the only important thing you need to do. Once the recordings are done and you have a good number of songs under your belt (Or even before that), you need to get your music in front of people who may potentially like it. This is the process of marketing; making people aware that your music exists, and getting them to interact with your music career in a way that’s beneficial for both of you.

If you don’t market your music effectively, not enough people will know about you. If you don’t get enough people to know about you and buy into what you’re doing, you won’t be able to make any decent money from it or gain a large enough fanbase. I’ve talked about this a lot before, so check out my music marketing guides if you need help with this side of things.

Musicians Fail When They Make Themselves The Main Focus

If you have the ‘me me me’ mentality, you’re not going to get very far with music. As a musician, you need other people to buy into what you’re offering if you want to go far. These people include:

The thing though, is none of these people are going to help you out if you make things all about you. You’ll just face a lot of rejection. People will want something in return, and if you’re not offering that, then your relationships will die out before they can be of any real benefit to you.

For example, your fans want the modern day ‘fan experience’. Simply putting music out isn’t enough any more, you need to interact with them on some level. If you’re not willing to do that (Or if you ignore them too many times), they’ll most likely look for another musician that will give them both good music and fulfill their need for two way interaction.

It’s an event organizer’s job to book good acts for their event, but they won’t take you seriously if you email them and say “’I’m the next big thing, you need to book me for your next event. Check out my music.” By emailing them this, you’re showing it’s all about you and you aren’t really interested in benefiting the club in any way.

Similarly if you only want other musicians to help you but you’re not offering to help them in any real way, don’t expect them to go out of their way to work with you.

If you’re not genuinely benefiting the person you’re trying to work with, don’t expect them to get excited about what you’re proposing in the same way you do. Most relationships in the music business will need to benefit both sides or they won’t generally work out.

You Think You Can Do It All Yourself 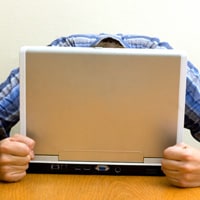 As I mentioned above, your music career revolves around people. This is even true if you’re a solo artist.

One of the key type of people you’ll need on board in your music career, are your team.

You team will consist of people who help you out with things you can’t realistically do by yourself. This can include dedicated marketers, a manager, a legal adviser, and the like.

While initially you can get away with doing everything by yourself, if you want to take things to the next level, eventually you’re going to need to get people to help you with things. A profitable music career often needs multiple hands to keep up with the daily tasks, so unless you want to burn yourself out and still not get everything needed done, start getting people involved when you start making any type of profit. This shows that people are willing to buy into you and that you can make money from it all, so invest in up-scaling your business by getting other people involved. This can be one person at a time if your budget doesn’t allow a full on up-scaling operation…

You Don’t Treat Your Music Career Like A Business

If you want a music ‘career’, you need to treat things as a business. If you don’t, you’re leaving yourself open to losing out on time, money, and bigger opportunities only available to professional businesses.

Treating things as a business includes (But is no limited to):

You Put Out Below Par Products

As with any business, the face you show your audience is the face you’ll be judged by. It’s because of this that you can’t expect to put out poor quality recordings or songs, and expect to be loved regardless.

Poor quality songs come in many forms. You could be the best live gigger for example, but if your songs sound like they’ve been recorded in a poor quality studio, your song isn’t going to come across very well. This’ll lead to people not buying them, or being disappointed when they do. Neither is a good thing, so I suggest you check out this guide on choosing where to record your music.

You can’t expect people to judge you based on your potential; If your song doesn’t come out perfectly (Or as close to perfect as reasonably possible), then don’t release it. People will judge you negatively based on this.

You Don’t Invest In Your Music Career

As you may have noticed, some of the above things involve money. Whether you’re hiring a team, buying an information product which will teach you how to do certain things in your music career, or investing in marketing tools, money at some point always gets involved. You simply need to invest money if you want to make your music career work.

If for example you decide to use your friend’s cheap home recording studio instead of paying $30 – $40 per hour to hire a better quality studio, you’re shooting yourself in the foot. Yes you saved say $40 on recording one or two songs, but are people going to hype up your poorly recorded song? No, they’re not. So these recordings are going to have a more negative effect on your music career then say not recording anything at all.

If you’re not willing to save up and invest in your music career, don’t expect to go very far.

So there you have it, 7 controllable reasons why musicians usually don’t get where they could have otherwise been. If you see that you’re making any of these mistakes, I suggest you take immediate action to rectify that problem. Doing so will give you a much better chance of getting where you want to be with your music career.